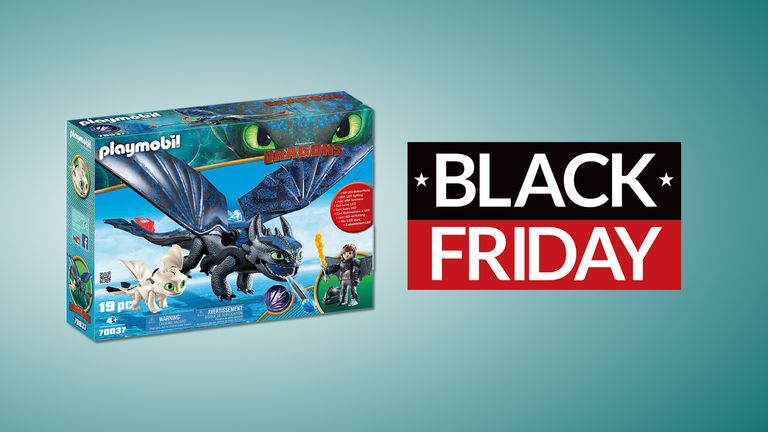 Amazon Black Friday deals are keep on giving already! Toys seem to be the hottest of all deals out there, like this cheap Playmobil toy deal that brings the price down significantly for a range of branded sets, like the DreamWorks Dragons Hiccup and Toothless with Baby Dragon set discounted down to £24.99 now.

• Up to 35% Off Playmobil Toys on Amazon today

We have a range of other deals round ups too, check out our best Argos Black Friday deals and best John Lewis Black Friday deals hubs too, where you'll find amazing headphones, video games, toys, small appliances and computing deals – among other great offers.

Playmobil DreamWorks Dragons Hiccup and Toothless with Baby Dragon set | Black Friday price £24.99 | Was £39.99 | You save £15 (38%) on Amazon
This brilliant playset features the two protagonist from the beloved How to train your dragon franchise, Hiccup and Toothless. All the better,  Toothless has blue LED back spikes and can also shoot working projectiles from his mouth. Hiccup holds his signature flame sword, too! Includes baby dragon as well.View Deal

Playmobil 9464 City Action Fire Engine with Working Water Cannon | Black Friday price £33.49 | Was £54.16 | You save £20.67 (38%) on Amazon
Features lights and siren sounds AND a cannon which shoots water projectile!  The roof is removable and this set can also be combined with 4968 Firefighters with Water Pump (sold separately). Pure fun for the whole family.View Deal

Playmobil 9429 Base Camp with T-Rex Game | Black Friday price £30.99 | Was £46.74 | You save £15.74 (34%) on Amazon
Features a T-Rex with movable arms and head as well as the explorers team. Also includes a functioning UV torch, a rotating laser gun with LED light and a plant with closed leaves which opens to reveal a hidden mushroom. Crystals, jungle plant and test tube are made UV-active plastic which can be lit up in the dark with the torch. Includes a functioning falling grille which can be closed by pressing the trigger, or manually pushed up. Even the treasure map reacts to heat!View Deal

Black Friday deals from around the internet