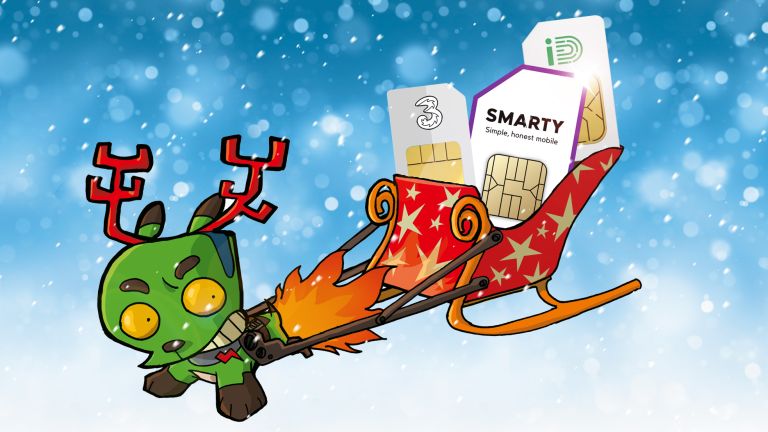 For phone lovers these SIM only deals are the best Christmas gifts of all. That's because they deliver great SIMO packages at a price points that are accessible no matter your budget.

From banging unlimited everything SIM only deals from Three, through sweet spot Goldilocks Zone SIMO deals that perfectly balance data and monthly cost, and onto cancel anytime, contract free packages that still deliver in terms of allowances, there really is a SIM only deal for every user here.

There's even a SIM only deal that costs just £4 per month!

The full details of these Christmas gift crackers can be viewed below:

SIM only | Unlimited data, texts and calls | £10 a month (for first 6 months, £20 per month afterwards | Contract length: 24 months | Available now at Three
Unlimited SIM only plans offer the ultimate in versatility and peace of mind, with you knowing each and every month that your phone usage, no matter what you do, will only cost what your plan costs. It allows you to kiss goodbye to nasty extra network charges - what you see is what you spend. And with this jaw-dropping SIM only deal from Three, what you spend is just £10 per month for six months, and then only £20 per month for the final 18. Simply jaw-dropping value.View Deal

SIM only | Unlimited data, texts and calls | £18 a month | Contract length: 12 months | Available now at Three
Three also are currently offering an unlimited everything SIM only package with a 12-month contract instead of a 24-month one, too. This deal costs £18 per month and doesn't let you bag the 6-months for £10 discount, though. If you like the idea of big unlimited everything value and a shorter plan length, though, then it is well worth checking out.View Deal

Mega Plan SIM only | 100GB data | Unlimited mins & texts | £17 per month | 1-month roll-over plan | Available now at Smarty
Smarty has been killing it latest with big data, low price SIM only deals, and this latest Mega Plan offer continues that trend superbly. This deal bags you a monstrous 100GB of data each month to burn, as well as unlimited minutes and texts, for just £17 per month. And, unlike some other SIM only deals, this plan is contract free, with a 1-month roll over in effect. That means that if you're not happy at any time after the first month, then you can cancel at any time. Free delivery is also included.View Deal

SIM only | 250MB data | 150 mins | Unlimited texts | £4 per month | 1-month roll-over plan | Available now at IDMobile
On a very strict budget and don't need big data or minutes? Well this insanely cheap SIM from iD Mobile is perfect. It bags you 250MB of data, 150 minutes and unlimited texts for £4 per month. Free delivery is included in the deal, too, and there is no contract, with a cancel at anytime 30-day plan roll-over.View Deal

Fancy a quality mobile phone to go with one of these awesome SIM only deals? Well be sure to check out T3's awesome best phones, best Android phones, best cheap phones and best gaming phones guides for plenty of top-rated handsets.