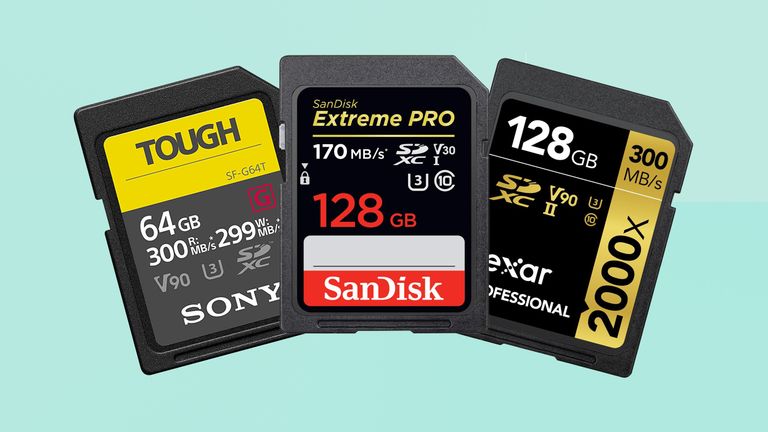 Right after you buy a new camera, the very next purchase is often a new memory card to go with it. Even if you have a stack of cards sitting at home right now, just like socks, you can never truly have too many.

In this guide, we’ll be looking at some of the best memory cards currently on the market which you can buy for a range of different cameras and devices.

Some cards are more common than others, while others bring the promise of increased durability and so on. If you’re not sure which is the right one for you - look no further.

What kind of memory card do I need?

Although SD cards are generally the most ubiquitous form of memory card, there are other types which your camera may take. Here are some of the main/most common types of card currently on the market:

SD cards can be bought in SDXC (extra capacity) or SDHC (high capacity) format and will be compatible with the vast majority of standalone cameras, ranging from compact cameras all the way up to DSLRs. Make sure you double check with your instruction manual though, just in case it uses something else.

Probably the cheapest form of memory, you can pick up SD cards with very high capacities for a very reasonable price these days. Although it can be tempting to buy the biggest card available, it can be more sensible to use several smaller cards, just in case one of them corrupts. Just like you wouldn’t put all your eggs in one basket, storing all your digital images on just one SD card can also spell disaster.

SD cards are either UHS-I or the much faster UHS-II. The latter variant is more expensive, especially if speed isn’t necessary for what you shoot.

A smaller variant on the SD card, microSD cards are generally found in smaller devices than cameras, such as smartphones and drones. Some compact cameras will also use them too, though.

When purchasing a microSD card it’s worth looking for one which comes with a microSD to SD adapter. This will mean you don’t have to have a specific microSD card reader to get the files from your card, and also means you can use it in any device which has a standard SD card slot, too.

A type of memory card which is starting to become more common, but it’s still relatively rare. XQD cards can be found in several Nikon cameras, including the Nikon Z7, the Nikon Z6 and the Nikon D850. The D850 also has a slot for an SD card, while the Z models feature just a single card slot.

These kinds of cards are more expensive than SD cards, but promise to be tougher and stronger, and they’re also faster - making them great for complicated tasks such as fast frame rates and 4K video. Be sure to allow enough cash to invest in a dedicated XQD card reader too, though.

This is an even rarer type of memory card, but you can still find it in certain cameras, like the Canon 1DX Mark II.

How to buy the best memory card for your camera

Although it’s not the most exciting of purchases, there’s a couple of things to consider when shopping for memory cards.

There’s little to no point in buying a low capacity memory card if you have a camera which produces high resolution files. It’ll fill up extremely quickly and you’ll be changing cards all the time. It’s probably worth sticking with 32GB as your absolute minimum. That said, as already mentioned, buying very high capacity cards is also potentially troublesome. Aim for between 64GB and 256GB as the sweet spot.

Whether you need to invest in a fast card is pretty much dependent on the type of photography (or video you) do. All XQD cards are fast, but if you’re trying to decide between a UHS-I or UHS-II SD card, think about what kind of things you shoot. If it’s mainly landscapes and static subjects, you can save some cash by going for the slower card. You should also double check whether your camera is compatible with a UHS-II card - although it will work in a UHS-I slot, you’ll be paying extra for speed you can’t use if your camera isn’t compatible.

With lots of choice on the market, it can be tempting to go for the cheapest memory card available and stock up. You might get lucky and happen upon some cards which are good value for money, but generally speaking you don’t want to be taking chances with your precious photos. Go for brands you can trust, and look for online reviews to back up your decision.

A good brand but available at a decent price, check out this card for everyday usage in your smartphone or drone. It’s not the fastest on the market, but with 90MB/s write speeds it’ll still do a good job. We’d recommend the 256GB version which you can grab for under £40 and boost the memory of your smartphone in a flash.

If you’re capturing video your demands are likely to be greater than otherwise. This Samsung card is reliable and fast, which is just what you need when it comes to 4K video shooting. It also has the benefit of 10-year limited warranty so you can feel confident that it should outlast pretty much any device you care to put it into.

Here is a card which is perfect for action cameras and drones, especially as it is waterproof, shockproof, x-ray proof and temperature proof. You can pick it up in capacities up to 1TB, but we’d be inclined to stick with 256GB unless you’re recording huge amounts of 4K video.

A good blend of high quality and good value, the SanDisk Extreme Pro is a great option for those who need all-round performance. It’s not the fastest on the market, but with 170MB/s it should still perform well for most ordinary situations. Although available in up to 1TB, 128GB is the best value for money - you might consider stocking up on a few to switch between.v

This high-speed (300MB/s) card is perfect for those who are recording a lot of video, or those who like to shoot fast bursts. If you’re somebody who shoots a lot of video files, getting the highest capacity of 128GB is recommended - and although it’s not cheap, this is a super fast card that will deliver great results.

If you want the world’s toughest and fastest SD card, then this is it. Not cheap at a starting price of £82.36, the Sony Tough cards are never-the-less the ultimate in reliability. They are bendproof, waterproof and rustproof so in theory, it’s pretty much impossible to break. Because of that, it’s a good option for those who are frequently taking cards in and out of their camera. The fact that it’s super fast too is helpful for video recording and action photography.

The choice is somewhat limited when it comes to XQD cards, as not too many manufacturers use them. So for now, our recommendation comes from Sony, a pioneer of the format. Expect to pay a top whack for the most capacious memory cards, but you can also expect the best speeds. If you’re just starting to build your XQD collection, 64GB should serve you well for the meantime - especially if you’re not doing a lot of video work. As CFExpress will likely replace XQD as the go-to choice of format before too long, it’s probably not worth splashing the cash on a very large storage card, either.