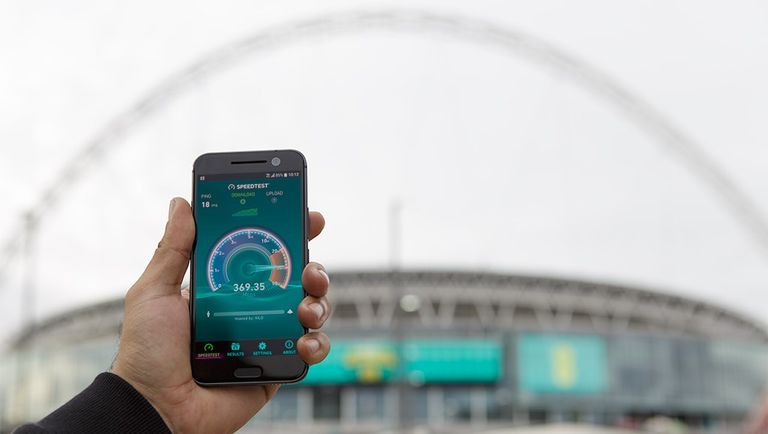 Prepare to reach lightspeed as EE unveils plans to bring 360Mbps download speeds to the UK. The firm has revealed it's using Cat 9 technology to kick off the next phase of its 4G plans for British shores.

Don't believe us? Check out the video below where EE performs a recent speed test on a HTC M10, reaching 354 Mbps. At Wembley Stadium no less! When the plan rolls out, it'll make EE a force to be reckoned with when it comes to superfast smartphone speeds.

Of course, the plan won't roll out such speeds to the entire country (at least, not yet anyway), but it will be coming to select locations including London, Manchester and Birmingham. Not every device will be able to hit these incredible highs either - your device will need to support Catagory 9 or Cat 9, including the aforementioned HTC M10, Samsung Galaxy S7 and S7 Edge and the Samsung Galaxy Note 7.

That's not to say those with Cat 6 will be forgotten, with EE has enabled the first stage of its 4G+ (LTE-A) network, which uses two blocks of mobile spectrum, in more than 150 towns and cities across the UK.

"There's no point having the latest smartphones on a network that can't support the top speeds the device is capable of," comments EE CEO Marc Allera. "We've invested in our network to ensure that all of our customers get the most out of the amazing smartphones they have, and can keep up with the highest speeds that the latest devices offer. With 4G+ now supporting Cat 9 devices, plus Wi-Fi Calling and 4G Calling, customers on EE will continue to get more from their new smartphone than on any other network in the UK.”

The high-speed, high-capacity network is already live in Wembley Stadium today, and will be activated on sites in central London this year starting in east London's Tech City, with further sites being enabled in the UK's busiest cities in 2016 including Birmingham and Manchester throughout 2017.

Why not check out: Dual camera smartphones: here's why you should want one