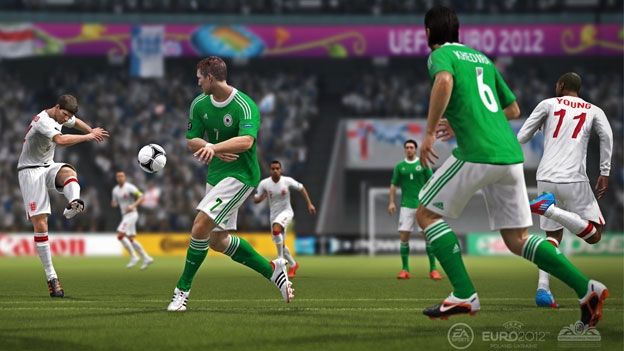 Ahead of this summer's tournament, developer EA Sports has got in to the football spirit releasing the FIFA 12 add-on UEFA Euro 2012.

Whilst the Euro and World Cup renditions of the much loved FIFA franchise used to spell another new and costly title on store shelves, for 2012 EA has opted for the digital route with the new Euro offering available exclusively as a paid downloadable expansion pack for existing FIFA 12 owners.

Set to kick off in Poland and Ukraine on June 8th Euro 2012 can now be previewed by the latest EA Sports football offering with UEFA Euro 2012 available from today for online PS3, Xbox 360 and PC gamers.

“This game will tap into the passion fans have for their national teams by capturing all of the national rivalries in-game, and re-creating all the emotion of the UEFA EURO 2012™ tournament,” said Producer Sebastian Enrique. “We are utilizing the best-playing FIFA videogame ever, driving live, digital content created from the biggest headlines from the tournament into the game, and offering an exclusive new mode that will challenge gamers in unique and compelling ways.”

Following the route to European glory UEFA Euro 2012 sees gamers presented with all 53 UEFA member national teams, the tournament's eight official stadiums and the full selection of the over the top fanfare associated to the international sporting event.

With online modes allowing those who splash out on the European themed DLC to compete against their friends and international rivals for tournament glory, EA has revealed the title will come with an all new 'Expedition Mode'.

“The all-new Expedition Mode designed exclusively for UEFA EURO 2012 enables fans to build, manage and compete with a customized team against other European nations, crafting the perfect strategy for European domination. Fans will choose their favourite European player or FIFA 12 Virtual Pro to captain their customized team, win matches to earn better players from defeated nations, and then defeat the best nations to earn the best players in a campaign quest to defeat all 53 countries and complete the journey to conquer Europe.”

Available now for the PS3, Xbox 360 and PC the UEFA Euro 2012 paid download is exclusive for FIFA 12 owners leaving those yet to splash out on the now ageing football sim high and dry when it comes time for the Euros.

Will you be adding to your FIFA 12 gameplay with the new UEFA Euro 2012 features following today's launch? Let us know via the T3 Twitter and Facebook feeds.