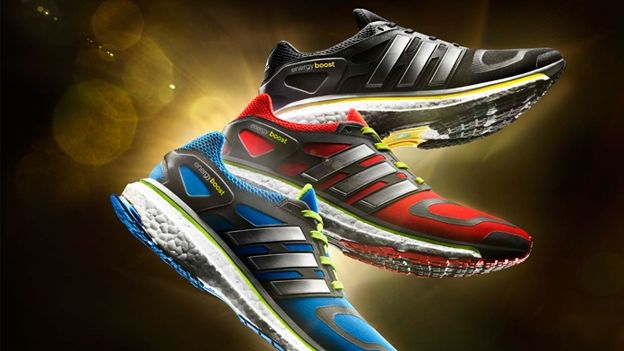 The combination of soft yet responsive material could potentially allow runners to run faster for longer distances. Another benefit of the Adidas Boost foam is that it is three times more temperature-resistant than standard EVA material, so performs more consistently in varying temperatures.

The Adidas claim of improved energy return seems to hold good in initial short road tests over short 10k distances. The Boosts are supremely comfortable, and radiate understated cool as they ease your passage over the ground.

The shoe upper is a stretchy, breathable mesh material, which offers a very snug, sock-like fit and is initially available in stealth black.

An Adidas spokesman said: “BOOST is a revolutionary material which combines the usually conflicting performance benefits of soft and comfortable, on the one hand, and firm and responsive cushioning, on the other, for the most comfortable run ever”.

The miCoach compatible Adidas Boost trainers will be available initially in black from February 27, UK Price is expected to be £120 RRP.

To check out the latest and greatest running shoes, check out our feature here.