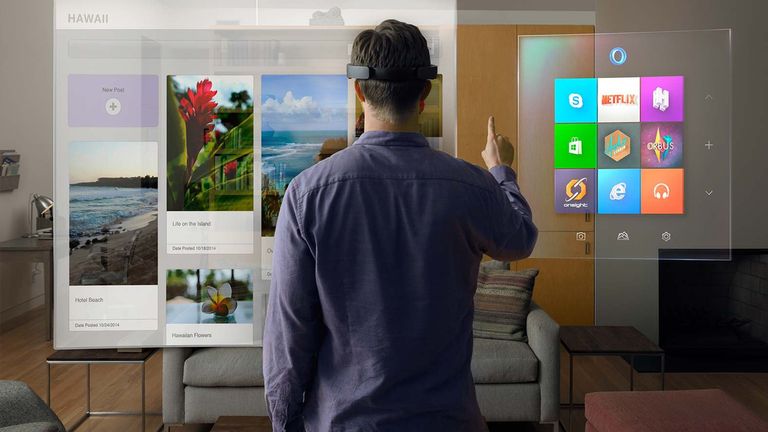 In early 2015, Microsoft unveiled something that looked so spectacularly fantastic it had the potential to reshape the brand and usher in a new age of computing. Building on the foundations of Windows 10 and offering something that was so radically different from what we have seen before, HoloLens was brought before the eyes of the world, and it looked incredible.

At Build, the companies' largest conference, Microsoft did a live demo of the headset, showing the potential applications of the device. Windows 10 apps were shown to be “pinnable” on surfaces, Skype was like talking to someone in the same room, while Minecraft looked out of this world.

But the reality may be different from how it seems in the on-stage demos. Many of those who actually used HoloLens version two – Microsoft had already iterated on the hardware from the original viewing earlier this year – were disappointed with the limited field of view. Engadget commented that it was “extremely limited” while Gizmodo described it as “tiny”. This may seem like a minor issue but if you can't use HoloLens on anything within your surroundings, then its usefulness decreases.

The dream of placing Windows 10 applications in the corner of your eye does not seem to be achievable with HoloLens in its current form, and that could be a big problem. It would be like a new iPhone having a one inch screen but still running the full version iOS: there would be some usefulness there, but nowhere near what the company had intended or users anticipated.

Demoing HoloLens was a tricky task for Microsoft, especially as the hardware is not in its final form, and one that they may have screwed up. According to the company, five years of research have gone into making the holographic elements of the headset happen and it has only now been unveiled.

The original pitch for the HoloLens, back in 2007, eventually wound up as Kinect 1.0, which, if we're honest, and despite all its success, is another example of Microsoft demoing a product that didn't match its potential.

It's unfortunate timing, as the tech media is positively buzzing with praise for the “new Microsoft,” a company freed from the shackles of Steve Ballmer. If a high profile product like HoloLens turn out to be a dud because it does not have a wide enough viewing angle, that's really going to damage that perception.

Let's face it, there is a precedent for Microsoft producing products that promise a lot but don't become hits. The Surface Table 1.0, a $10,000 (£6,500) touchscreen within a table, never found a market; IllumiRoom, an earlier attempt at AR, but projected onto walls from your TV on this occasion, remains in the “where is it now?” file.

Even the Microsoft Band, despite the excellence of its sensors and software, is one ugly and un-tactile bit of kit. I just hope that with HoloLens, Microsoft isn't going to produce another product with massive potential, but poorly implemented.

At the moment, the gadget HoloLens most resembles is Google Glass. This was another, in some ways, revolutionary piece of hardware that flashed key information into the user's field of view, but it had a number of flaws, cost $1,500 a pop, and has now been seemingly put on the back burner – although if Google learns from its mistakes, version 2 could be a knockout, because there were a LOT of mistakes to learn from. Google, of course, has plenty of other “moonshots” to fall back on – self-driving cars, for example.

Microsoft, as far as I know, has fewer innovations waiting around the corner, so a flop for HoloLens could set the company back greatly. It's one of the best innovations for Windows 10, and while the fate of Windows 10 is not inextricably linked to HoloLens, they are tightly wound.

Price could also be an issue. At the HoloLens' various showings, it became clear why Microsoft purchased Minecraft back in 2014 for $2.5 billion. It's a killer app on HoloLens, and a truly immersive experience that works incredibly well.

However, as with Oculus Rift and Morpheus, gamers will only pile in if the price is right, and according to “one current Microsoft executive,” quoted in the New York Times, HoloLens is going to cost “significantly more than a game console.”

Is Microsoft going to repeat the mistake it made with Surface, leaving HoloLens as a niche product for businesses and rich enthusiasts only? Asking early adopters to buy an extremely expensive toy is one thing, but persuading the general public to do so is another matter.

Whether Microsoft will sort out the issues that could blight HoloLens remains to be seen. In my view, the narrow field of view could be a real Achilles Heel. Spending hundreds of pounds on an AR device that impedes your view of the world rather than enhances it does not seem like an enticing proposition.

At the moment it seems that Microsoft needs to either manage the HoloLens hype or improve it a lot before launch, else it'll face a backlash from disappointed customers. Microsoft is to be congratulated for its innovation and vision, but it needs to really crack the delivery and pricing of its new breed of products if it's to move beyond being a PC hardware and software giant, and take on Google, Samsung, Apple et al on their own turf.