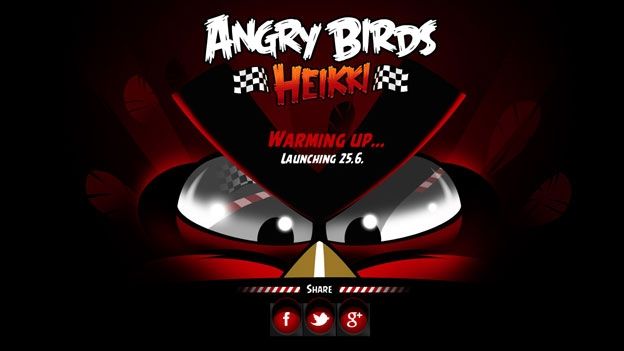 Having faced a week's delay, developer Rovio has launched its Formula 1 tie-in title with Angry Birds Heikki launching with a selection of racing themed web-based levels.

Not quite the Angry Birds themed racing sim that was expected, Angry Birds Heikki has hit web browsers a week behind schedule with the first of 12 Formula 1 themed levels seeing gamers transported to Silverstone for more of same in bird-flinging fun.

Helping promote its Finnish routes, Rovio has teamed up with Scandinavian racing driver Heikki Kovalainen for the 2012 Formula 1 season with the Finn's now iconic Angry Birds decaled helmet making an appearance in the game which builds on past Angry Birds Seasons, Rio and Space successes.

Forcing fans of the Angry Birds franchise to head to Kovalaninen's Facebook page, those who 'Like' the social stream are rewarded with a code that allows them to unlock a special F1 helmet wearing Angry Birds for use within the game.

Offering users a slow filtered spattering of content, each of the additional 11 upcoming levels will be made available in the lead up to their location replicating Formula 1 events with Hockenheim and Budapest next up with the series culminating in Sao Paulo on 21st November.

Are you an avid Angry Birds gaming fan? What do you make of the newly launched Angry Birds Heikki offering? Let us know via the T3 Twitter and Facebook feeds.