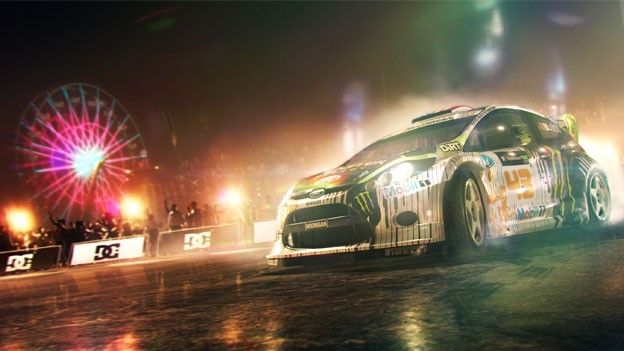 The DiRT Showdown UK release date is today, May 25th, with the PS3, Xbox 360 and PC title to landing with s new arcade style and Destruction Derby

Developer and racing sim specialist Codemasters has launched the next addition to its award winning DiRT gaming franchise with DiRT Showdown landing in stores and online today with a host of new explosive gameplay features.

Taking a step away from the hardcore rally experience that was bolstered by the inclusion of pure showmanship thanks to the inclusion of Gymkhana modes in DiRT 3, DiRT Showdown is an all action arcade thriller with classic racing levels to be paired with Destruction Derby and Hoonigan modes.

“DiRT Showdown is not the sequel to the authentic rally-centric DiRT 3, but a brand new experience from the DiRT team,” Julian Widdows, Codemasters' VP of development said. “We're building on Codemasters Racing Studio's world-class strengths in track design, graphics, AI, damage and online to create a new theatre of racing with the emphasis on accessibility and fun from race one.”

Following the success of its trio of predecessors, DiRT Showdown sees the franchise once again headed up by rally poster boy and all-round driving nut Ken Block with a bevy of automotive beasts at the disposal of gamers from Block's Gymkhana FOUR H.F.H.V. Ford Fiesta to a selection of muscle cars, vans and even the odd hearse or two.

“DiRT Showdown charges into the arcade racing space with a uniquely Codemasters feel,” said Mike Chapman, senior games designer at Codemasters. “Whether players are using nitrous to boost, smashing into their opponents or pulling off stunts, DiRT Showdown's fresh handling system and super-charged damage engine embed excitement into every event.”

Having previously tipped the title for a slightly ambiguous 'May 2012' arrival, Codemasters has launched DiRT Showdown with the latest racing SIM landing for Sony PS3, PC and Xbox 360 platforms.

Are you a fan of the DiRT racing franchise, what do you make of the new DiRT Showdown trailer? Let us know via the T3 Twitter and Facebook feeds.