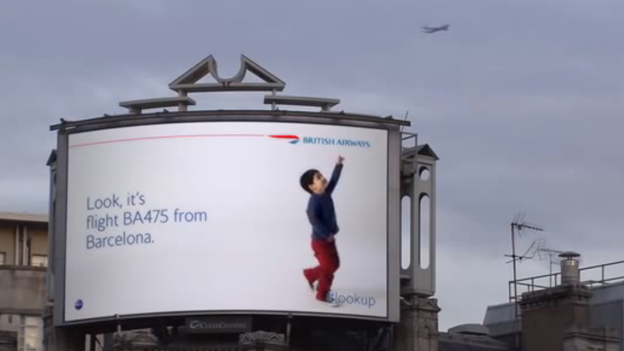 However, rather than pointing at punters and tourists on the ground, the advert's surveillance technology is focused on the sky.

The advert features a small child that points and follows any British Airways flight that passes overhead, as well as revealing where it is going.

The billboard is joined by a number of other intelligent billboards around the London area.

According to BA, the advert is designed to remind people how magical flying can be from the perspective of children.

The adverts will also carry a relevant message, such as “Fly the new A380 to Los Angeles” and so on. It will also display the lowest fare available and the temperature of the destination.

"We all know from conversations with friends and family that we wonder where the planes are going and dream of an amazing holiday or warm destination.

"The clever technology allows this advert to engage people there and then and answer that question for them.

“We hope it will create a real 'wow' and people will be reminded how amazing flying is and how accessible the world can be.”