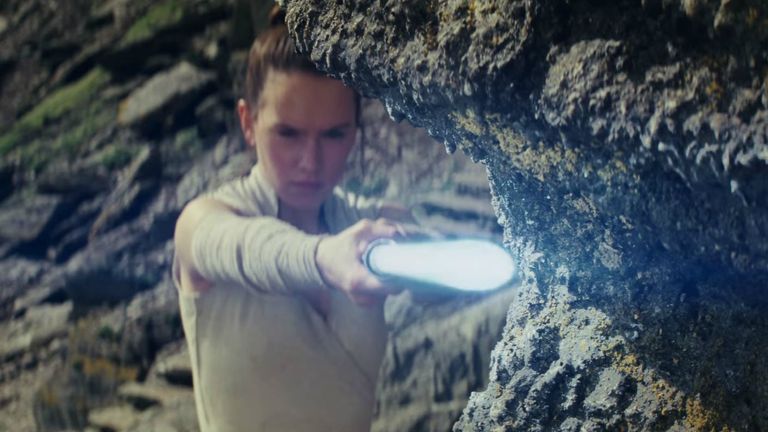 Ah, welcome my friend! Come on in from the barren, frozen wasteland of Hoth dear visitor. Yes, we see that glint in your eye, that yearning to consume every last drop of Star Wars: The Last Jedi information available. No, no, don't offer any explanation or excuse. It's fine, we understand - it's Star Wars, right?

Well, you're safe now, your toils are over, as below we have everything we know about the new film pooled into one super handy, spoiler-free guide.

We've got the hottest images, the sweetest trailers and all the juiciest rumours about new toys, the film's plot, among much, much more. So pour yourself a Ruby Bliel, put your feet up on a Jawa and blast off into Star Wars: The Last Jedi heaven.

Also don't forget to check out all the new Star Wars toys that are being released in time for The Last Jedi, as well as T3's Yoda-grade best Star Wars Lego sets for Christmas 2017 buying guide.

Star Wars: The Last Jedi hits cinemas on December 14 in the UK and December 15 everywhere else.

Here's the latest official trailer for Star Wars: The Last Jedi. We get a good dose of new Rey content in this one, with everybody's favourite training montage bit getting a run out. There's also some hot Porg action.

The first non-teaser trailer gives us our first proper taste of the The Last Jedi's action, as well as a some cryptic hints as to how the plot is going to unfold. Kylo Ren remains rather angry after his The Force Awakens hi-jinx.

Above and below you've got a brace of behind-the-scenes trailers, as well as a panel with some of the cast and crew talking about what is was like to work on The Last Jedi.

A series of Star Wars: The Last Jedi movie posters have been officially released so far, including the film's lead poster as well as a series of character-based ones. Each carry through the film's heavy use of the colour red, which was first introduced in the film's name unveiling, which seems to indicate that this film will be focused on the darker side of the force.

The lead poster is obviously a kind of riff on the original Star Wars poster, with Rey holding her lightsaber aloft in the centre. However, unlike the original this saber begins the colour blue and then transitions into red, seemingly indicating the central conflict in the film, and maybe in Rey herself.

Check out the posters below:

Unfortunately, if we just look up the official plot summary for Star Wars: The Force Awakens then we get this:

Hmmmm... not very detailed that is for sure. However, here at T3 Towers we've fed everything we already know about the state of the narrative, as well as decades worth of Star Wars plot consumption (films, books, games) into our patent-pending plot guessing machine and this is what we think will happen in Star Wars: The Last Jedi. (Obviously, potential spoilers.)

Luke already knows why Rey has arrived on his hermit island and she herself wants answers as to why she's getting weird visions and access to The Force. Luke is, naturally, reluctant and unwilling to train Rey after the disastrous results with Ren, but after Han's death is placed front and centre along with the First Order's general wickedness, he eventually agrees. Cue training montages and a bit where Luke mimics the Yoda lifting ship out of swamp bit. Meanwhile, Kylo Ren and General Hux go and pay visit to Supreme Leader Snoke, who decides that Luke is a threat and dispatches the Knights of Ren to deal with both him and Rey.

The Resistance, led by Leia, looks to regroup and respond after the Starkiller Base attack. There will be POLITICS and off the back of that key members of the Resistance such as Poe, Finn and Rose, will have to undertake a black ops, off the record-style mission. While this mission is taking place, The Knights of Ren will meet Luke and Rey (either on the hermit island or at a new destination; they find them as Ren/Snoke can sense where Rey is or something) and a massive battle takes place where we first get to see how powerful Luke has become. Rey is revealed to have learned much from Luke, but still needs his help. Rey and Luke are victorious and leave the island to / continue to search out some McGuffin. Snoke training Ren montage.

Big black ops mission action scenes and renewed First Order military aggression causes the POLITICS to end and allies to join together to launch a proper counter-offensive on the First Order's planetary base on (insert planet here). Luke and Rey get McGuffined into going to the location of Snoke (probably the same planet as the First Order's main base) and they proceed to infiltrate his location while a larger space battle ensues above the planet between the First Order and the Resistance. Poe will naturally be flying around gunning down loads of baddies. Finn will likely also be there and descend onto planet for ACTION. Luke/Rey/Ren/Snoke have fight or series of fights. If anyone dies it will be Luke. Ren/Snoke/Rey will most likely lose a limb. Ends with a draw in terms of wider conflict and key players escaping planet.

There's only been new character revealed in the film's first trailer and that is Rose Tico, played by Kelly Marie Tran, who described her character as "part of the Resistance, and she works in maintenance."

"She’s not a soldier. She’s not looking to be a hero, and she gets pulled a very big way into an adventure in this movie with Finn."

There are other new characters though who have yet to be revealed properly, including someone played by Benicio del Toro and Laura Dern's Admiral Holdo. These characters were visually revealed via Vanity Fair though:

As you would expect with a new entry in the Star Wars universe, brand new locations are being introduced. So far only two of these have become known:

Crait is seen if a fair few shots in the second Star Wars: The Last Jedi trailer and is a hot, desert planet rumoured to be located in the Unknown Regions, a large quadrant of the Star Wars galaxy that is largely unexplored.

The planet's surface has been described as a giant salt flat, while its interior is full of lava and valuable minerals, hence Crait's mining operations. These mining operations belong to the Resistance, and appear to be a front for a new military base also.

From the trailer, it appears the First Order discovers the location of this Resistance base and launches an offensive, with the new brand of Heavy Assault Walkers (AT-4X) visible.

According to director Rian Johnson, Crait "plays a key role" in The Last Jedi.

The other major destination that we've seen something of is Canto Bight, an up market casino that the galaxy's elite like to frequent, unlike the low-end cantina on Mos Eisley.

From what has been spoken about so far, we know that Finn and Rose travel to Canto Bight on a mission with the Resistance, however, what that is remains a mystery.

Interestingly though, Mark Hamill has mentioned that he was on the set of Canto Bight, stating that:

"I was on one set, and I’m not giving anything away because Rian has already talked about a casino sequence. The set, with 150 actors all dressed in prosthetics and puppetry and robots — that set alone could probably easily have financed 100 Brigsby Bears. It was easily one of the most opulent sets I’ve ever been on."

Does this mean the Luke Skywalker ends up at Canto Bight at some point during The Last Jedi?

Warning! What follows is speculation, however it is based on numerous Internet leaks and, if you want to walk into Star Wars: The Last Jedi with a fresh mind, then stop reading now. Remember: once seen, they can't be unseen! Warning!

Throughout this guide a lot of questions remain unanswered from the officially released publicity material. However, the Internet been the Internet, some leaks have dripped out during production and led to some wild speculation online. Here at T3 Towers, we fed these nuggets of information into our patent pending Speculatron machine and this is what it spat out:

WARNING! - POSSIBLE SPOILERS WILL BEGIN BELOW THIS IMAGE OF REY STANDING IN THE RAIN - WARNING!

Unsurprisingly quite a lot of the oh-so-important Star Wars: The Last Jedi toys have started to leak online, with shops receiving stock in advance of the film's release in December.

One of the biggest leaks has revealed what looks like the entire range of The Last Jedi action figures. Check them out in the gallery below:

A bunch of Force Link toys have also been spotted, including this new Resistance Ski Speeder set. The speeder comes bundled with a Poe Dameron figure.

Naturally, the big toy manufacturers such as Nerf and Hasbro are set to put out a load new toy weapons, including blaster rifles and lightsabers. Here are a couple that have leaked already:

Star Wars: The Last Jedi - is it going to be poor?

We're not going to lie to you - there's a good chance if we're being honest. That teaser trailer seemed remarkably flat, recycling the same structure and tone as The Force Awakens but nowhere near as well, and also seemed to offer little that was genuinely new. If The Last Jedi does what it seemed to hint at in the trailer and simply have another Rey learning experience culminate with an original cast member buying it then we will not be impressed.

Also, unlike Empire Strikes Back in the original trilogy, it's hard to see how The Last Jedi can go markedly darker in tone from where The Force Awakens left it. We've already found out that the galaxy is in chaos thanks to the efforts of the First Order, so how is this going to be communicated/reflected in this film? There's a lot of now established heroes' narratives to juggle too and, putting it bluntly, after seeing how that was cocked up in Rogue One, it could be disastrous for this trilogy's momentum if these aren't handled with care.

We've also got serious reservations about how Supreme Leader Snoke is going to weigh up as the big bad in The Last Jedi. Unlike in The Force Awakens, where we only got a dark holographic snapshot of Snoke, everything indicates that in The Last Jedi he's going to be a major player, countering the emergence of Luke as Kylo Ren's tutor in the dark arts. The recently leaked picture of Snoke (see above), however, if true seems overly cartoony and after the disaster that was Darth Maul - massively two dimensional and uninteresting as a character; could kick-ass though! - it would be unwise to fall down this pit again.

A large part of why Star Wars, both in the original trilogy and - albeit to a lesser extend - in the prequel trilogy, was because the antagonists were so good. When you think of the actors and characters involved -  Ian McDiarmid / Emperor Palpatine, Christopher Lee / Count Dooku, James Earl Jones/ David Prowse as Darth Vader - it becomes obvious that some serious acting chops and class was imbued in these baddies and, from what we've seen so far, Snoke ain't got it.

Check out all our other great Star Wars stuff:

21 alternative ways to take down the Death Star

10 reasons why Star Wars is better than Star Trek

The best Star Wars characters NOT from the films

Best Lego sets 2017: Star Wars, Dr Who, Minecraft and much, much more

This guide will be periodically added to and updated right up until the release of Star Wars: The Last Jedi. Be sure to check back in the future for even more information.