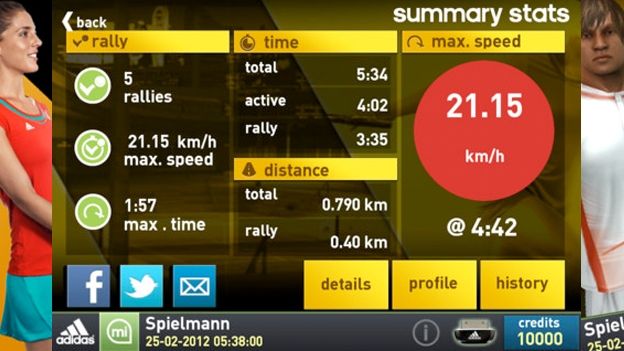 With Wimbledon just a couple of months away, tennis courts around the UK will soon be awash with would-be Andy Murrays, inspired to bravely battle their way to the quarter-finals of the world's most famous grass court event.

With that in mind, Adidas has launched a tennis-themed version of its popular miCoach wellness app, which will chart the fitness side of the gentlemanly pasttime.

If you've got a miCoach Speed Cell chip, or a pair of the new Barricade 7.0 tennis shoes (which has the sensor built in), the app will chronicle the amount of rallies you partake in, the distance you've covered on the court and your average and maximum speed.

Results will be synced back to the iPhone giving a detailed stat breakdown, which can be shared with pals via Facebook or Twitter. You'll also earn in-app bonuses for your on-court performance which can be used to power-up your pro for use in the included tennis game.

The more hours you put in on the actual court, the better your player will get on the virtual court.

Tennis pro, the lovely Andrea Petkovic, is on hand to give you tips along the way.