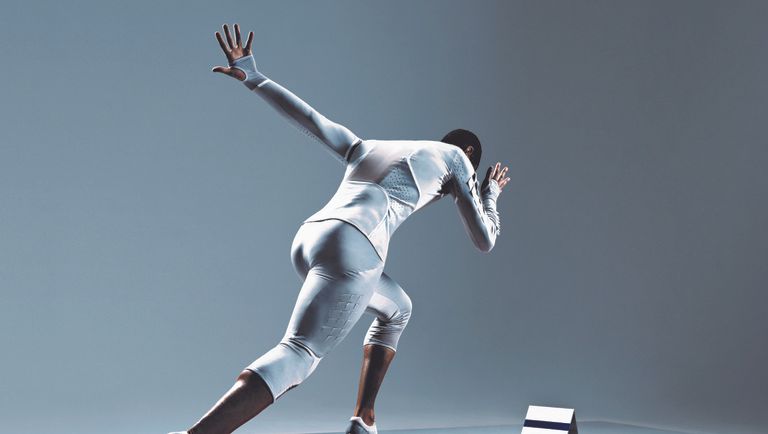 What happens when a condom maker has a go at designing a conceptual bit of sportswear made from the same material as its main protective items? You get the SkynFeel Apparel - a long jump suit that will help you, "feel everything." Sigh.

According to Skyn, the one-of-a-kind suit made from latex alternative polyisoprene has been designed with biomimicry in mind - in other words, its been created to work in sync with the natural movements of the body. Skyn says it can adapt to temperature changes, minimise body limitation and maximise those all important seconds in the air.

Apart from the novelty value, there are some interesting ideas to take away from the experiment, including the potential future uses of something as pliable and flexible as polyisoprene.

“The Skyn brand has innovation woven into its DNA,” says Jeyan Heper, president and general manager, Sexual Wellness Global Business Unit at Ansell. “In the world of competitive sports, athletes look for every advantage, and we knew our SkynFeel condom material was revolutionary in our own industry, therefore we turned to the world of performance athletics and decided to conduct an experiment in apparel. We wanted to allow ourselves to think differently, outside of our own condom box.”

Think Kim Woojin's recurve 700 in archery was the first record of the 2016 Game in Rio? Well, you'd be wrong. Turns out the International Olympic Committee set the first record of Rio 2016 by ordering the largest ever shipment of 450,000 condoms direct to the athletes' village. That's 42 per athlete, and a 200% increase from the last London 2012 Olympics. Let's hope their minds are on the medals.

Why not check out: Best running shoes: the very best trainers for getting fit in 2016