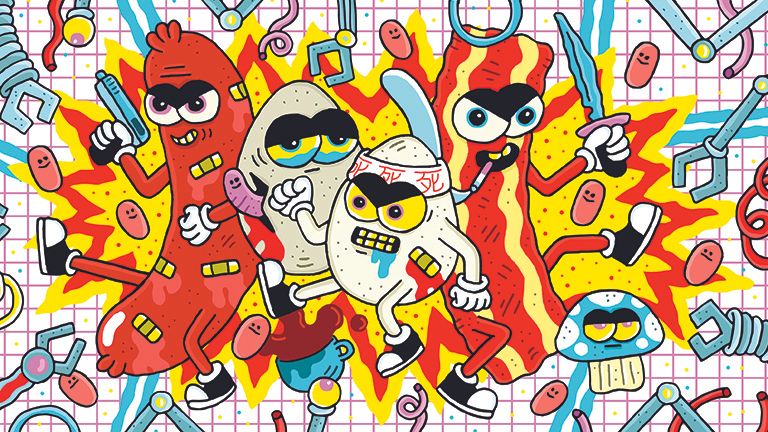 How can I make my breakfast better, Guru?

Breakfast, they say, is the most important meal of the day. That insidious ‘they’ again, always telling Guru what’s right and what isn’t. They had better not have anything to say about GaGu’s official breakfast of champions – three Freddos and a can of Kestrel – or things are going to get even nastier than they already are.

Anyway, where were we? Gadgets, yes. Let’s start by pepping up those morning eggs a little. A Rollie ‘vertical grill’, or its excellently named equivalent, the Elgento Verteggo, is ideal if you want to have your eggs cooked into a disconcertingly droopy cylinder shape and served up on a stick. Or why not trick your still-shelled eggs into thinking they’ll be nicely incubated in the VonShef Electric Egg Boiler, but instead cook up to seven of them at a time using super-hot steam? It does poaching, too, although this option leaves you stuck with a pathetic single egg, and that’s just not breakfast enough for Guru. Not even close. Perhaps, if you were extra cunning, you might also buy a Tefal Toast n’ Bean, a combined toaster/cooker thing that’ll heat up your beans (or an egg) while simultaneously crisping up a couple of slices of wholemeal.

That’s not the tip-top of toast, though. You could singe rude messages onto your breakfast slice with the Toasteroid, previously lampooned by GaGu in issue 261 of T3, but you shouldn’t. You could keep an eye on the brownness of your bread through the magical window of the Magimix Vision, but it can only manage a pair of slices at a time. For the ultimate in pre-work bread-burning, Guru recommends the tried-and-tested British engineering of the Dualit Classic (£199 for four slots, £219 for six), which looks the dog’s dangly bits, toasts like a boss and should last you 50 years. That’s a lot of toast.

Is wearing earphones likely to damage your lugholes?

Are you ready for a bit of science? Yes? Then let’s begin. Guru probably doesn’t need to tell you that shoving anything deep into your earholes could potentially be a bad idea. Your earbuds fire out sound. Contain it within the tiny echo chamber of your ear canal and, if you’re raising the volume to overcome loud environmental noise, you could be hitting your eardrums with 90dB without even knowing it.

Spread this sound over a day’s listening and, according to the experts at Center Point Audio, you’re looking at subjecting yourself to the equivalent of a shotgun blast that somehow lasts a full 30 seconds (imagine that!). In context, that’s a really bad idea.

Now, before you go binning your buds, know this: you’re unlikely to be listening at 90dB. European audio devices are, by law, supposed to be limited to 85dB output without a warning, and a maximum of 100dB if you choose to ignore it. Regular comfortable listening volume generally falls below the 80dB mark considered safe by professionals, unless your lugs are as mangled as Guru’s.

Yes, the actual sound pressure in your ear depends on the type of isolating tips your buds have, and the impedance of your headphone drivers – as well as, to a certain extent, the type of music you’re listening to. GaGu’s favourite is Chris De Burgh’s The Traveller, so he’s never had any problems. If you’re sensible with your volume, you shouldn’t ever cause yourself any serious problems.

If you’re truly worried, a set of bone-conduction headphones might well do the trick. They use what Guru presumes is actual magic to vibrate the bones within your skull to send sound to your brain. Since they bypass your eardrum entirely, producing no air pressure whatsoever, their output can’t actually be measured in decibels.

The only real negative is that you can’t use something like the Aftershokz Sportz Titanium to rudely block out Mrs Guru’s mother’s incessant wittering. Not that, er, you’d want to.

When GaGu’s lad was just ten months old, he graduated from Oxford University with a first-class degree in History. Now 12 months old, he’s given it all up to be a plumber. But anyhow…

Guru is quite amazed at how far baby monitors have come. Once a static-laden radio link to help you hear your babe’s gurgles and chuckles (or philosophising in the case of GaGu’s little one), they’re now digital super-spy devices, clear as a blue sky, with better range and lots of extra features.

There’s a caveat, though: these data-heavy devices usually come with a reliance on the government-approved wireless frequencies that are also used for Wi-Fi.

If you’re OK with ruining your network speed (and perhaps waiting that bit longer for Westworld to buffer), then Gadget Guru points you towards the AngelCare AC1100 , which serves up crisp video, infrared vision, and even a mattress-movement sensor to enable you to keep ultimate tabs on your sprog. Or you could just pop down to your local Argos and get your hands on a Fisher Price one…

Can you make painting less of a chore?

Guru can do anything, you should know that by now. There are, of course, a bunch of plasticky gadgets out there. Black & Decker’s Speedy Paint Roller , for instance, sucks up a bunch of paint into its shaft and enables you to dispense it through the roller, dodging trips to the can, but GaGu suspects it doesn’t work awfully well.

Rolling and wiping paint on things, though? That’s so old-fashioned. Guru prefers, where possible, to eschew manual labour in favour of blasting things as hard as he can, and that’s where the Wagner Wallperfect W-665 comes in. Fill it with paint, and it’ll squirt a jet of it at your walls and ceiling to get the job done in no time. Just be wary of splashback.

Do you ever cube, Guru?

Ah, your venerable Guru is always multiplying numbers by themselves three times. Big fan of maths. But GaGu presumes that you’re actually talking about what non-nerds would know as the Rubik’s Cube – and yes, Guru has a fair few Chinese import cubes. He even has a bunch of ‘cube lube’, perhaps the most hilariously named fluid in his extensive collection.

None of us are ever likely to break Mats Valk’s ridiculous 4.74-second world-record solve at any point in the future. Gadget Guru instead wavers around the six-second mark – a performance that’s echoed in his lovemaking. His personal-favourite QiYi Thunderclap V2 is worlds ahead of the clunky, scratchy thing that’s sold under the Rubik’s banner.

How can I stay warm on my bike without getting sweaty?

Bad news: if you get hot, you’re going to sweat. There are things you can do to mitigate this. Breathable gear will allow that steamy sweat to escape, and let the cold air in. Botox injections will kill off your sweaty pits, but GaGu does not support this unless medically sanctioned. You can try a different clothing balance, warming other areas and going lighter on your moist bits but, fundamentally, Guru’s solution is to have a nice shower on the other end and wear antiperspirant.