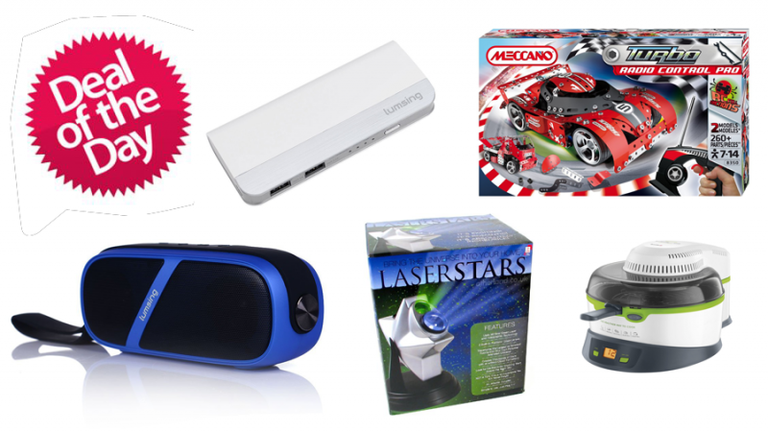 The deals are coming thick and fast this week and today we've got some more super deals on tech and more.

And if you love bargains and haven't checked out our plans for Black Friday yet, take a look at our Black Friday UK page! Lots of amazing deals to be had on November 28.

First up, we've got an exclusive deal on the Lumsing portable Bluetooth speaker. It's got a beefy battery for those lazy days on the beach and NFC for easy pairing with your mobile. What's more, you can get an exclusive £10 discount by using our secret code, leaving you paying just £20.99 instead of £30.99! The secret code is TRADAR10.

And while we've got another exclusive deal for you on Lumsing gear. The Lumsing Harmonica portable battery charger has a 10400mah cell which means it can carry enough juice to charge even the most demanding mobile devices multiple times. And we invite you to say 'meh' to the Amazon price of £21.99 by getting a £5 discount with the secret code GIZMODO5 when you check out!

How about this for an amazing Christmas present for a loved one or, ahem, yourself? The Laser Cosmos projector will re-create starry night skies, galaxies and nebulas in your own home. So if you're been inspired by Interstellar or the Rosetta project, you can pick this cool gadget up for £103.77 on Amazon.

Yesterday we brought you a great deal on the Tefal ActiFry Plus and it proved to be rather popular. So today we come with more home frying gifts! How about the Breville Halo Health Fryer for jsut £68? It's designed to use only one spoon of oil for a more healthy meal.

We've also seen this cool gift for the kids - the Meccano radio controlled Pro Turbo Car. It's half price on Argos right now, meaning you can pick it up for £29.99.