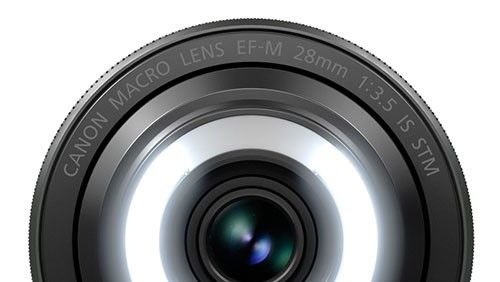 Photography giant Canon has revealed one of its latest projects - a new EF-M 28mm STM Macro Lite¹ that has a ringed LED built directly into the lens itself.

The macro lens, which has been designed to work with the firm's EOS M range of cameras, is super-lightweight at only 130g, making it the lightest mirrorless interchangeable lens for its cameras. It can take shots as close as 13mm too, so expect some serious chops in the magnification department.

You can easily affect the luminosity of the LED with a simple switch, meaning getting the right photo is only a few tweaks away. With both life-size 1.0x magnification and 1.2x in Super Macro mode at your disposal, the IS STM also has an anti-shake feature which corrects for blurring caused by jittery hands.

The IS STM is also rocking a handy 45mm focal length, so you can shift between landscape and portrait seamlessly. So with an in-built LED, the ability to shift between modes without changing lens and plenty more besides, we're impressed with IS STM as a macro lens for both pros and novices alike.

Tha ability to avoid carrying an extra tool in the form a light will no doubt come as a relief to both hardcore professional photographers, those just getting into cameras with the need for a much more all-rounded model and everyone else in between.

Why not check out: Why your smartphone camera can't beat a digital camera