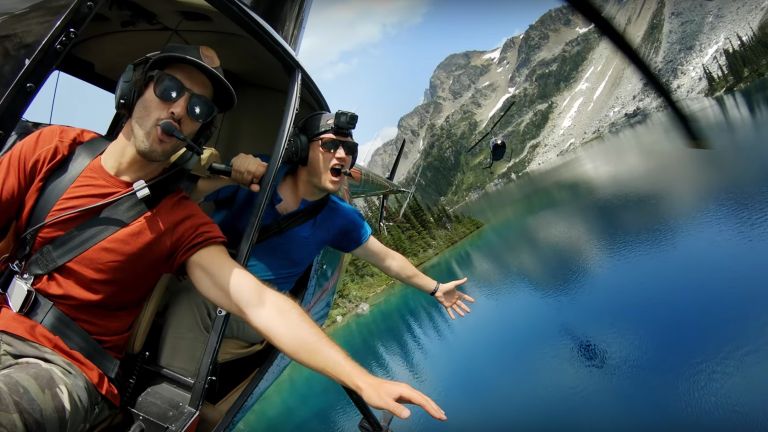 The mighty GoPro is constantly evolving its line of world-beating action cams, so how do you know which is the best GoPro for you? Throw in loads of seasonal price discounts, which can bring the top cams within reach of more modest budgets, and the decision becomes even harder. Or does it?

The key to choosing the right one for you is getting to know the big hitters in GoPro's main range of action cameras, then deciding upon which features matter most to you and which you can live without or will simply never use.

Of course, the newcomers to the range are the GoPro Hero 8 Black and the GoPro Max, the brand's new 360-degree camera.

GoPro cams capture crisp, stable and dramatic footage, every time and without fail. There are four in the range, so there's one for every type of adrenaline junkie. Before we walk you through those, let's first recap on what an action camera is so that you are clear you need one of these versus another type of camera.

If you’ve watched any action sports videos in the last few years (from the insanity of Red Bull Rampage to Felix Baumgartner's epic skydive from space), the likelihood is that at least some of them will have been filmed using a GoPro.

GoPros are the ultimate accessory for thrill seekers and the go-to action shooter for many extreme sports athletes. So whether you’re white water rafting, skateboarding, mountain biking or swimming with dolphins, these waterproof, durable cameras are designed to capture every second of the action, whatever the conditions.

These tiny, rugged cameras work with a range of mounts (helmet mounts, handlebar mounts, even dog mounts, etc) so that you can record from different perspectives.

Currently there are four cameras in the GoPro range, each offering top-level optics, image stabilisation, waterproofing and usability. What’s more, GoPro’s versatile mounting systems mean you can position your camera closer to the action.

Which is the best GoPro for you? Let's look at what considerations you might want to make to help you choose the ideal cam for your hobby, sport or lifestyle pursuit.

Best GoPro: tips for choosing one

There are two things to consider before purchasing a GoPro: 1) What will you be using your footage for? and 2) What’s your budget? The good news is that there is a GoPro camera for all types of thrill seeker and for a range of budgets.

The T3 5-star rated GoPro Hero7 Black sits at the top of our best GoPro guide. The range also includes the Hero7 White model for action fans on a budget, and the mid-range 4K30-toting Silver model.

Each of these models is waterproof to 10 metres and features a 2-inch touchscreen and voice control for optimum control. Aside from price, the big differences between these three cameras are video resolution and image stabilisation.

If 360-degree video is your thing, the fourth camera in the GoPro line-up, the Fusion, can shoot full 360-degree footage up to 5.2k (at 30fps) resolution.

The best GoPro you can buy right now

The best GoPro for serious thrill-seekers

If your YouTube or Instagram channel is bursting with banging edits of your latest white knuckle antics, the Hero7 Black is the ideal GoPro for you.

Mount the action camera to your handlebars, crash helmet or surfboard using one of GoPro’s many fantastic mounts and you can shoot up to 4K in stunning clarity, even in low light. Dial in 1080p/240fps to harness the camera’s ultra high frame rate and add slick slo-mo cuts to your videos.

Of course, 4K footage is useless unless the footage is smooth. That’s where GoPro’s HyperSmooth tech – exclusive to the Black model – comes in. The digital stabilisation acts like a gimbal, adding unbelievable fluidity to your shots, regardless of whether you’re bouncing down a rock-strewn mountain on your bike or shredding slopes on your snowboard.

The Hero7 Black excels in the photography department, too. 12MP HDR photos bring greater detail and realism to your images, and the HyperSmooth-aided TimeWarp produces stunning time-lapse clips.

Add improved 3-mic audio capture, voice control, a super intuitive user-interface and 2-inch touchscreen to the mix, and you have a supremely versatile camera to capture everything you need to create your next epic edit.

The Hero7 Black is without question the best GoPro camera overall, but it might be too much tech for your needs. Read on to see if there’s another better suited to you.

If your budget won’t stretch to the Black edition, or you don’t need that much tech, the cheaper GoPro Hero7 Silver edition offers plenty of great features with only a handful of compromises.

Stabilised 4K/30fps footage looks fantastic and gives you plenty of angles to work with in your edits. With a top frame rate of 60fps (at 1440p), slo-mo isn’t the Silver’s strongest suit, so you’ll need to stump up for the Hero7 Black if that’s a deal-breaker.

10MP HDR stills with Wide Dynamic Range are great for documenting days (and nights) in the wild, and it’s easy to share shots directly to social media from the GoPro app.

As with all the Hero7 cameras in the current GoPro range, the Hero7 Silver is waterproof to 10 metres, making it ideal for adventures above and below the water. It’s built to tough it out during even the most hardcore of pursuits, and voice control means you can start rolling even if the camera is out of reach on a helmet or handlebar mount.

The best GoPro for adventurers on a budget

The Hero7 White edition is an absolute game changer at the budget end of the action camera spectrum. Very little outlay bags you best GoPro pedigree, unrivalled waterproofing (10m) and rugged build, plus voice control and a slick 2-inch touchscreen. Oh, and compatibility with GoPro’s killer range of mounts.

If you’re a weekend adrenaline junkie, or you simply want to film yourself taking the dog for a walk, this is the ideal, no-frills action camera to chuck in your backpack.

There’s no 4K video here, but the top 1440p/60fps resolution and 10MP stills should deliver all the quality, stabilised video and photos you need to load your channels with cool edits and galleries. And if the thought of detailed video editing turns your stomach, QuikStories within GoPro’s Quick app makes it a doddle to create fun edits from your clips.

You won’t be worrying the producers at Red Bull TV too much with footage captured on the Hero7 White, but at half the price or the Hero7 Black, this is the best GoPro for weekend warriors looking to document their adventures.

Sometimes, even a regular GoPro’s wide field of view isn’t enough to do justice to the action you’re capturing. For that, you’ll need GoPro’s Fusion 360-degree camera. It’s rugged and waterproof to 5 metres, so it will deal with whatever activity you throw at it. Dual high quality lenses shoot 5.2K/30fps spherical video (or 18MP stills), with gimbal-less stabilisation ensuring footage is super smooth.

There’s no touchscreen on the Fusion (there’s no space due to the dual lenses), but a one-touch shutter button and voice control make it a breeze to start shooting when things kick off.

With the action in the can, explore every pixel of the seamless footage on your device or via a VR headset. Alternatively, use GoPro’s nifty Overcapture facility to turn your 360-degree content into shareable photos and videos.

The Fusion mounts to standard GoPro mounts and the camera also comes with an extendable Fusion grip tripod, so you can plant it right at the heart of the action and ensure you’re capturing every last bit of it.