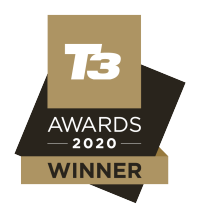 The GoPro HERO 8 Black’s frameless design makes it ultra-clean looking and super-simple to use. GoPro’s powerful and feature-rich shooter boasts a simple yet highly intuitive interface that makes it easy to achieve premium results – even for beginners. While for an integrated front-facing display you'll need the H9 or newer, overall it's still a superb package overall.

When it first launched, the GoPro HERO 8 Black had some very big shoes to fill. Could it improve on its groundbreaking predecessor? Could GoPro take on the very well-equipped and aggressively priced DJI Osmo Action – especially with the latter's inclusion of an integrated front-facing screen?

Well, we spent some quality time with the HERO 8 Black, using it both on the dirt track and in the ocean, and we're happy to report that the answer to both of those questions is 'yes'. There are now two newer GoPros in the range; which you can find details of in our our GoPro HERO 10 review (released Sept 2021) or GoPro HERO 9 review (released Sept 2020). Or for a full rundown of the current lineup, head to our best GoPro explainer.

Despite not being the latest and greatest model, the HERO 8 Black remains an absolutely excellent action cam – and it still sits amongst the best action cameras on the market.

While overall we love this action cam, we should state that although there are some big wins here, there's also one very obvious frustration (more on that later). And the extent of how much it frustrates you depends upon why you're thinking about buying a GoPro. Read on for our full GoPro HERO 8 Black review, or to see if it's worth your while shelling out for the model up, check out our GoPro HERO 9 Black vs HERO 8 Black face-off.

If you're after a GoPro deal, our widgets will automatically pull in the lowest prices at all times.

A note on price before we start. The good news is, with newer models on the market, we're likely to see some good GoPro deals on the HERO 8 Black – keep an eye out for a GoPro deal over the holiday shopping season, or if you're not set on a GoPro yet, check out the alternatives in our best cheap action camera roundup. Now let's take a minute to drool over the HERO 8 Black action camera in all its glory:

With a refined body and a host of other innovations, the HERO 8 Black improves on the older HERO 7 Black in a number of ways. The GoPro Max 360-degree camera is another option from GoPro, replacing the GoPro Fusion, but this stands apart from the HERO range.

So, about that ‘disappointment’… Vloggers and anyone else hoping to see an integrated front-facing display on the HERO 8 Black action camera, as found on its biggest challenger, the DJI Osmo Action, are out of luck. If you want a front-facing screen on the HERO 8 Black, you will need buy one separately – so at an additional cost – in the form of a GoPro ‘Mod’ called the Display Mod – more on these new GoPro accessories later. Alternatively, you could plump for the newer GoPro HERO 9 Black, which does feature an inbuilt a front-facing screen.

Another big rumour that did the rounds before launch was that the HERO 8 Black would be powered by a next-gen GoPro System on Chip. That's untrue: the GP1 Chip sits under the hood of the new GoPro, just as it did on the HERO 6 Black and HERO 7 Black.

Regardless, GoPro seems confident that a combination of the HERO 8 Black’s tweaked casing, new easy-to-use video modes, and a slicker, more powerful version of its vaunted HyperSmooth image stabilising software, together with a raft of other functionalities and enhancements, packs enough of a punch to make up for the lack of an integrated front-facing display. We’re about to find out if that’s true…

Crucially, the HERO 8 Black does away with the faff of having to seat the camera in an additional frame (required by the HERO 7 Black, DJI Osmo Action and other GoPro rivals) to mount the camera. Instead, two ‘folding fingers’ hinge out from the base of the GoPro and fit directly to a mount or whatever accessory you choose to use. These fingers are magnetically held flat against the base when not required. It’s a neat new addition.

A quality rubberised finish covers much of the face and edges of the rear of the camera, helping to prevent potential slippage from your hands. And though lighter than its predecessor (126g vs 142g of the HERO 7 Black in a frame), the new GoPro’s metal construction still feels pleasingly weighty.

The camera feels bombproof, and essentially it is. We inadvertently discovered this during a mountain bike ride during testing – we crashed and the rear drop-out mounted HERO 8 Black went through our rear wheel upon impact. Spokes were bent and the rim was buckled, but the GoPro came away unscathed and carried on recording video throughout the ordeal. The HERO 8 Black also survived bumping off roots, being whipped by brambles, and getting churned and bashed about while surfing, all without sustaining a scratch.

The HERO 8 Black was the first model to utilise a dedicated system of accessories, called ‘Mods’ (short for modular), designed for use with GoPro's frameless HERO cameras. There are three HERO 8 Black-specific Mods in total:

While not massively practical for the HERO 8 Black’s chief function as an action camera, these Mods are funky and should boost the GoPro’s appeal to vloggers and anyone else looking for a premium compact and lightweight video production tool.

The HERO 9 Black also has its own dedicated Mods, but the Display and Light Mods are compatible across both cameras.

Pleasingly, and as expected from action camera royalty, the HERO 8 Black is super-simple to get to grips with straight out of the box. Charge it using the supplied USB-C cable, fire it up, choose from video, photo or time-lapse mode and away you go.

In video mode, the rear touchscreen enables you to scroll through four presets, each designed to suit a range of scenarios. These presets are called Standard, Activity, Cinematic and Slo-Mo. Each of them can be customised to suit your needs, and you also have the ability to create an extra six custom presets and add them to an easy-access list.

The default video presets are:

Similarly, in photo mode you have four customisable options to choose from: Photo, LiveBurst, Burst and Night, plus the ability to create and store your own custom settings here.

The default photo presets are:

Time Lapse video mode enables you to easily create static, time-lapse sequences. Or, using the updated TimeWarp 2.0 function, you can create moving, handheld sequences ideal for travelling over a distance, or for conveying the passage of time. A nifty new feature enables you to switch between real-time and time-lapse recording with a tap of the touchscreen – a facility that we felt actively encouraged us to get creative and inject more fun into our videos.

Recording in low light conditions including at night? Try out the Night Lapse video mode, or play around with Slo-Mo (8x) to highlight the juicy parts of your action edits.

Like the HERO 7 Black, the HERO 8 Black responds to a range of voice commands, which can be handy when doing an activity that requires both hands. GoPro reckons the camera can handle 14 commands in 11 languages and 6 accents. However, when moving at speed or doing any activity with background noise, we found that the GoPro did not always pick up our instructions – frustratingly, we had issues when mountain biking and surfing.

While you can edit your images and videos using the camera, you get a far greater range of options and applications when using the GoPro App. Once synced via Bluetooth with your HERO 8 Black, the app enables you to control your new GoPro via your device. It also enables you to stream to YouTube and Facebook Live, to offload your content locally or to GoPro’s cloud service (subscription fees apply). And with it you can edit your clips and instantly create cool looking videos using Quik and its in-built themes.

The GoPro HERO 8 Black’s stills and video are incredibly rich and detailed. This is particularly apparent when filming at 4K60. While the video resolution may be the same as its predecessor, a superior bit rate at 100Mbps (compared to the HERO 7 Black’s 78Mbps) improves data transmission and produces an even better, studio-quality image as a result.

While the differences between unstabilised and HyperSmooth-stabilised footage are impressive, the additional gains from High and Boost mode are marginal – not a massive problem when HyperSmooth is already the most impressive action camera image stabilisation available.

The options for photo processing are pretty similar to those on the HERO 7 Black but with a few additions. SuperPhoto automatically selects the best image processing for your shot, while HDR uses processing best suited for use in well-lit conditions with slower moving subjects/surroundings. Also, you now have the option to save your images as unprocessed raw files as well as in jpeg format.

While the HERO 8 Black's 12MP still image resolution was as good as it got for an action camera back in October 2019, the HERO 9 Black sports a 20MP resolution that's increasingly common on more recent cameras. (The H10 bumps that right up to 23MP.)

Incredibly easy to use, all while yielding seriously stunning results, the GoPro HERO 8 Black action camera is a very impressive piece of kit. Boasting HyperSmooth 2.0 image stabilization and a host of other enhanced features, this is an extremely feature-rich action cam. The frameless design and range of compatible Mods enable you to expand the HERO 8 Black’s huge capabilities beyond pure action shooting.

For those of you who are vloggers first and action photographers/videographers second, the H8 is perhaps not the best choice, because you'll have to pay extra to add a flip-up display to the HERO 8 Black via the Display Mod. A better option, if budget, allows, would be either the H9 and H10, both of which include that handy front facing live preview screen. Or for those on a tighter budget, it's worth considering cheating on GoPro with a DJI Osmo Action, which also has a front facing screen. Similarly, Similarly, because image resolution remains essentially the same as the H7 Black, if you already own that cam it's not such an essential upgrade.

For pro-action photographers though, the HERO 8 Black is a strong recommendation, and arguably delivers the most bang for your buck within the GoPro range. Ultimately, when it comes to the true nature of an action camera – a compact, rugged cam that can handle whatever you throw at it and still live to tell the tale – the HERO 8 Black is still very much a serious contender.

Rich Owen has been frantically riding mountain bikes since the early 90s and is a former editor of What Mountain Bike magazine. He’s also a surfer with over 20 years’ experience and lives near North Devon’s best beach breaks.