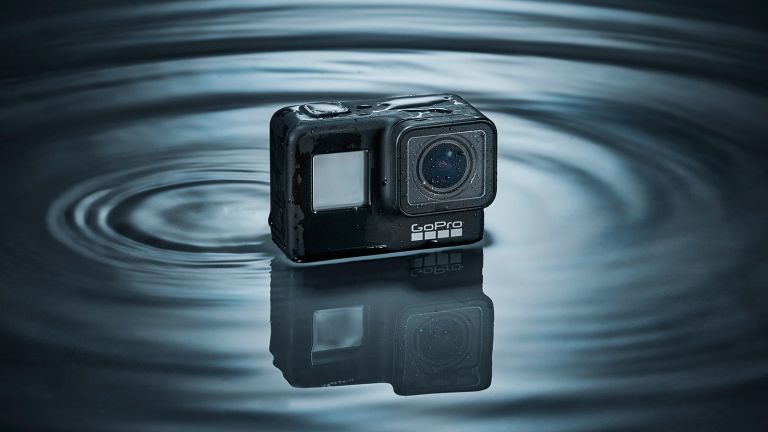 The GoPro Hero7 Black is a seriously powerful action camera. A series of nifty updates have made getting professional-looking shots easier, rather than bumping specs (for the same price as GoPro’s previous flagship £379). Yes it has serious competition in the form of the DJI Osmo Action, but we think GoPro has still done enough to retain its coveted action camera crown, fighting off stiff competition in an increasingly competitive market.

The GoPro Hero7 Black is the top performing model in the brand's world-class action camera range after the GoPro Hero8 Black bringing advanced digital image stabilisation to 4K resolution videos, along with handy features such as voice control and a small screen on the front that displays your current settings.

Instead of trying to deliver higher resolution or more frames per second, with the Hero7 Black GoPro has focused on making your videos less shaky. The result? A technology called HyperSmooth: built-in electronic stabilisation that enables you to ditch the gimbal and capture smooth, professional-looking footage on the go.

Among the powerful updates born into the Hero7 Black are improved audio, a TimeWarp (time lapse) video function, live-streaming and a fun gesture-based UI. Yep, the Hero7 Black is an incredible action camera, and with the release of the GoPro Hero 8 Black, it is now the intermediate action shooter in the GoPro range.

For perhaps the first time ever, GoPro's action camera crown has been properly challenged – drone royalty DJI recently released its debut action cam, the Osmo Action, and its aimed at the same market at the Hero7 Black.

The cameras have a very similar spec, but the DJI has a front display and a higher level of case-free waterproofing. As we noted in our review of the DJI Osmo Action, that front display is a true game changer and shows us just how important that kind of extra display can be. Still, the GoPro has the spec to out-gun the DJI in a few key areas, which we'll cover below.

Impressively, all of these new features have been crammed into a case the exact same size and shape as its predecessor, and that casing feels that little bit more premium than the plasticky Osmo Action.

The Hero7 Black is waterproof down to 10 metres on its own, or you can expand that to an impressive 30 metres with an optional GoPro waterproof housing. Plus, there’s a massive selection of compatible mounts (official GoPro branded and third-party mounts) and extras that work with the Hero7 from the get-go. So you're buying into a very extensive, action-ready universe of accessories here.

One of our favourite features is the ability to record TimeWarp videos. These use GoPro's highly impressive image stabilisation to create handheld, moving timelapses. They’re ideal for setting the scene, conveying a sense of time passing, or for adding creativity to an edited video.

Check out a quick TimeWarp test we filmed below...

The real star of the Hero7 Black show is HyperSmooth stabilisation, built-in electronic stabilisation that enables you to ditch the gimbal and capture smooth, professional-looking footage all the time.

You do still get 4K video at a slick 60fps, as well as 8x slo-mo at Full HD. Crucially, the image quality is excellent, with vibrant colours and great dynamic range. The higher bit-rate and advanced colour profile option are welcome news for pros.

HyperSmooth works incredibly well, and doesn’t present any of the traditional warping or artefacts found on older GoPros. It is, just about, the best auto-smoothing on the market so far, but it’s not so far out in front of the DJI Osmo Action that it’s a clear winner – it’s just a tiny bit more natural.

Check out the HyperSmooth stabilisation below (we've also tested it in more extreme action scenarios):

Just like the Hero6, there’s a touchscreen on the rear of the GoPro Hero7 Black, but the user interface has been redesigned. The menus, modes and settings are much more simple to use now, with intuitive gestures that can be picked up by anyone.

You’ve also got voice control, which is handy when you can’t physically reach the display or are wearing gloves – as you might be if you're surfing, climbing or  snowboarding.

When you connect to the GoPro smartphone app you’ll have another cool feature to play with: live-streaming. When the Hero7 Black first launched you were only able to send video directly to Facebook Live (via your smartphone’s internet connection). Now you can livestream to YouTube, too.

The GoPro Hero7 Black was the most powerful action camera the company had created, until the Hero8 Black was released. The Hero7 Black is still an excellent action camera, though. We're impressed by its digital HyperSmooth stabilisation, and how easy it is to use. App support is far better than with its current main rival, the DJI Osmo Action, and it offers a slew of snazzy features including TimeWarp, live streaming and voice control.

The Hero7 Black also looks and feels nicer in the hand than the DJI Osmo Action. Ultimately, it's insanely easy to get pristine, sharp footage with the GoPro straight out of the box, and with its rugged build you can trust that it will survive pretty much anything you throw at it, both in and out of the water.