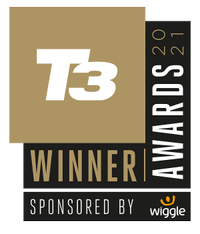 The GoPro HERO 9 Black rocks a front-facing colour screen and boosted specs across the board, yet GoPro has kept complexity to a minimum, meaning pretty much anyone can pick up a HERO 9 Black and shoot genuinely impressive 5k video. That impressiveness isn't mainly to do with the resolution – although that is near-Hollywood quality – but the astonishingly good stabilisation and capture options.

The GoPro HERO 9 Black sits in the middle on the current GoPro HERO lineup, having been replaced in September 2021 by the latest flagship: the GoPro HERO 10 Black. Despite some strong efforts from competitor brand DJI in recent years, GoPro still dominates our best action camera ranking with its incredibly robust, feature-packed cams, led by the HERO range.

The GoPro HERO 9 Black will be instantly recognisable to pretty much everyone, as will the basic functions, but GoPro has cranked up specs almost everywhere compared to its predecessor – the HERO 8 Black – as well as adding Apple-esque design tweaks to what was already a potent platform.

The GoPro HERO 9 Black launched on 16 Sept 2020 – and is available to buy now across all territories. The RRP is as follows:

Head to our dedicated GoPro deals page to get the full low-down, and if you're not set on a GoPro, explore alternatives in our best cheap action camera roundup. You can also save if you opt for an older model. Browse back through the previous models:

Same old, but different – the GoPro HERO 9 Black manages to follow the design cues of the last handful of GoPros, but with some vital tweaks, most noticeably the long-awaited full-colour, forward-facing 'selfie' screen. This little screen not only immediately differentiates the HERO 9 from the HERO 8, but also flags just how seriously the DJI Osmo Action competition has been taken by GoPro.

Next door to the new screen, that newly-boosted 23.6MP sensor might look similar to the HERO 8 at a glance, but there's a surprise in store – the lens cover is back, and in Gorilla Glass too. A simple twist not only allows you to swap out scratched lenses, but also upgrade via the Max Lens Mod (£89.99), a whopping 155 degree FOV that delivers 'unbreakable' video stabilisation. The Max Lens Mod (available globally in October 2020) also boasts a 'powerful horizon lock', that works even when the camera is rotated a full 360 degrees, although you'll be pretty happy with the native GoPro HERO 9 Black's impressive Horizon Levelling skills.

In addition, avid GoPro users have the series of 'Mods,' GoPro accessories that were introduced with the HERO 8 to play with, all engineered with different superpowers. There's an attachable LED light that maxes out at 200 lumens (see our full GoPro Light Mod review for more on that one), another to improve audio capture via a directional mic (check out our full GoPro Media Mod review), and another, the Display Mod, that adds a two-inch front-facing display.

The overall build quality – as you'd expect – is excellent, rubberised industrial corners blend into un-markable matte plastic, while critical areas such as the battery cover and mounting tabs are comfortingly solid alloy. Those mounting tabs will be familiar to GoPro HERO 8 users, and will be just as well received, folding flat for storage but easily extended and clamped for use. While the HERO 9 is no giant, it is slightly larger in every respect than the HERO 8, but is packing not only a more powerful sensor, but also another 500mAh in the battery department, and a 16% larger rear screen to boot – all round improvement.

Another improvement is the packaging – the HERO 9 is GoPro's first camera to ship without plastic packaging, instead arriving in a zippered travel case – one less accessory to lay out for, and less packaging to wrestle with – win, win.

As you'd expect from a GoPro, the controls are beautifully simple to operate, even with just two buttons – power/mode on the left side and record start/stop on the top right. There are four pre-loaded Capture Presets (Standard, Activity, Cinematic and Slo-Mo) that let you jump right into recording the action without getting bogged down in endless settings, which has long been a key USP in GoPro's favour. There are up to 10 slots available for your own custom settings if you need them, catering for the professionals too.

By linking to the GoPro app via Bluetooth, and over Wi-Fi for more intensive meddling, you can remotely control the camera, preview shots and share them direct, as well as make edits on the go. Finally, you can create 1080p livestreams immediately, with presets for social channels including Facebook and YouTube as well as a manual option for the perennially awkward.

In a particularly well-timed nod to the remote-working world of the ‘new normal', GoPro has added the ability to use the HERO 9 as a cabled webcam. Add the USB-C charging cable and the GoPro Webcam desktop app and you're up and running. A particularly useful magnetic mount in the shape of a crocodile clip provides the perfect screen mount for this, adding an extra bit of value for professional vloggers and casual Zoom-callers alike, as well as a handy dual-use faff reducer when travelling.

Speaking of faff-reducing, that bigger battery might be responsible for piling on a few grams, but it does add a claimed 30% battery life. In testing, battery life on the HERO 9 was strong, enough for shooting multiple videos at full 5K quality and hundreds of images at a time, and the test model came with an additional battery pack for additional juice when out and about. The only snag there is that without an external charger, the battery can only be charged onboard (via USB-C), forcing you to switch batteries in the camera to juice up both. The battery door does just clear the mounting screw even if mounted the wrong way round, so it's not necessary to remove the camera from your favourite mount to charge, whatever your preferences.

The only real negative of the HERO 9 is that the solid build quality does notch up the weight, making this a pretty chunky device. That's not an issue in many cases, but some mounting situations (like on the side of a lightweight helmet) will make you notice that 158 grams more often than you might like. The GoPro Android app is surprisingly finicky about connections too, occasionally losing connection and finding it tricky to reconnect, although this was during intensive testing as opposed to normal use.

It almost goes without saying, but the HERO 9 does indeed knock out incredible quality video and stills. This is in part due to the significant bump in sensor resolution, but the real stars of the show are GoPro's backroom work with presets and software tools. Hypersmooth and Timewarp will be familiar to HERO 7 and HERO 8 owners, but here they're both upgraded once again (now both on V3) and deliver noticeably better results even on stock settings.

Horizon levelling is now baked into the camera, not just the app, and is immediately noticeable. Using the GoPro-supplied RC buggy in testing creates astonishingly smooth and watchable footage even in extremely bumpy situations, more akin to a professional rig than an action cam. That impression is boosted when grabbing frames from 5k video, which due to the oceans of resolution available still come out at 14.7MP/16:9, like you're running a high-end SLR. Also like an SLR, the burst function for stills is impressive, augmented by LiveBurst (from the HERO8) that captures 1.5 seconds of the action before and after you hit the button, making sure you don't miss the best bit of the action.

This package so far adds up to a powerful and competent device, but GoPro has packed in yet more, with Hindsight and Scheduled Capture tools. The latter brilliant for time-lapse shots, just set and forget, while the former adds real magic to the mix, enabling you to capture up to 30 seconds of footage before you hit the shutter button – a huge boon for those of us who realise too late that something awesomely video-worthy just happened.

There's more good news too, as the occasionally-buggy voice controls of the HERO7 and HERO8 are now improved. Although limited to 14 key commands, the voice control in quiet environments works perfectly, although less well in noisier situations, which are the times when it really needs to work seamlessly.

Horizon levelling: On Camera + With the GoPro App

Waterproofing: 10m (33ft) without a case

Memory storage: MicroSD with at least class 10 or UHS-I rating

Should I buy a GoPro Hero 9 Black?

As ever with a new GoPro edition, it's hard to not like the HERO 9's newly-honed imaging abilities, and the supporting software just keeps getting better and better. Overall GoPro has done one thing very well here, and that's make the 9 seem substantially better than the 8 (which will obviously see a significant price drop now that the new, more desirable model has arrived).

Unlike previous models though, the step-up that the HERO 9 brings is across the board, and that front-facing screen will make the HERO 9 a no-brainer for those wanting to capture properly-framed direct-to-camera moments. The new horizon levelling, smoothing technology really does make a vast difference to the quality of video you'll capture while moving.

Mark Mayne has been covering tech, gadgets and outdoor innovation for longer than he can remember. A keen climber, mountaineer and scuba diver, he is also a dedicated weather enthusiast and flapjack consumption expert.