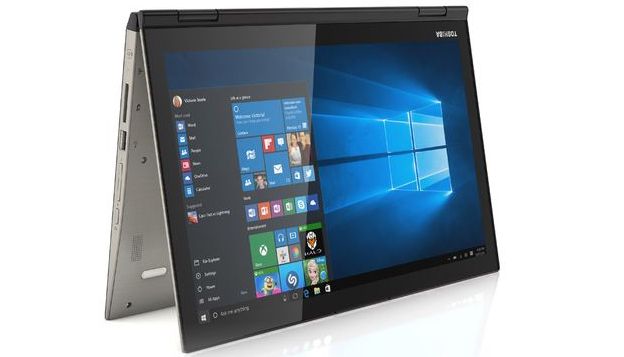 Toshiba is ready to wow prospective laptop owners with an Ultra HD 4K convertible that is the first of its type in the world.

The Satellite Radius 12 is Windows 10 ready and as well as the Ultra HD 4K display it also comes with a brand new 6th-generation (Skylake) Intel Core processor that will have power hungry users drooling.

Star of the show is the 12.5-inch Ultra HD 4K display that has a 3,840 x 2,160 pixel resolution and offers 362ppi plus colour calibration technology certified by Technicolor and ChromaTune for Toshiba software. There is also a full HD touchscreen option for customers that don't need all that shiny 4K goodness.

Under the hood, it can be configured up to an Intel Core i7 chip, 8GB of LPDDR3 RAM plus internal storage options range up to a 512GB SSD. What you see on the screen is powered by integrated Intel HD Graphics 520 and connectivity-wise there is a USB Type-C Gen 2 port, two USB ports, dual-band Wi-Fi, Bluetooth and a lot more.

Along with its five different modes that give it a high level of versatility, the Satellite Radius 12 comes with a full version of Windows 10 and as such takes advantage of Continuum when switching between desktop and tablet modes. There is even a webcam that is enabled for Windows Hello face recognition.

Toshiba's new convertible will be shown off at IFA 2015 in Berlin later on this week before being released during Q4 in the UK and pricing has yet to be announced.

New MacBook 2015 review: is this the way all laptops should be?