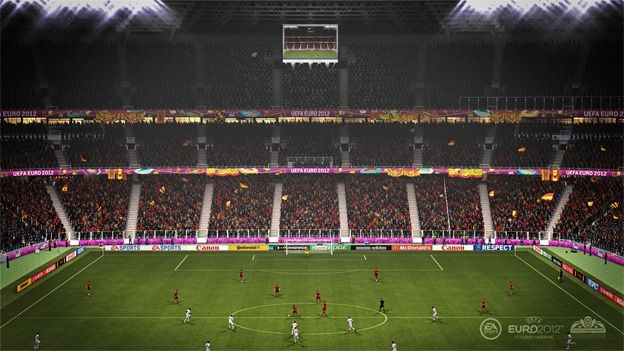 Having hit Xbox 360, PS3 and PC gamers yesterday, FIFA 12 add-on UEFA Euro 2012 has been revealed as lacking an officially licensed Welsh side

Following yesterday's release of the FIFA 12 tie-in UEFA Euro 2012, a number of reports have revealed that developer EA Sports has failed to include an officially licensed Welsh side leaving gamers with a selection of carefully amended names and fake kits.

Whilst the presence of unlicensed and fictionalised team and player names has become a standard aspect of Konami's PES releases, the omission of a fully endorsed Welsh side from the FIFA 12 downloadable add-on marks an unusual characteristic of the EA developed title.

Although early adopters of the Euro 2012 tie-in title can opt to take to the field under the Welsh flag, the national Wales side, unlike the other 52 countries within the game, does not feature the team's official kits with the side's star players also failing to replicate their true life counterparts.

Despite featuring in the full FIFA 12 release under their respective club teams, in the downloadable UEFA Euro 2012 add-on the likes of Aaron Ramsey, Gareth Bale and Craig Bellamy become 'Aaron Rumsey', 'Gareth Belth' and 'Craig Belmont'.

Although EA has failed to offer any official comment on the lack of an official Wales team, it is believed that the developer has failed to come to terms with the Welsh FA over imaging rights.

Officially launched yesterday, April 24th, UEFA Euro 2012 landed as a paid-for download add-on for last year's FIFA 12 release. Available for Xbox 360, PS3 and PC gamers the title follows the route to European glory with fans presented with all 53 UEFA member national teams, the tournament's eight official stadiums and the full selection of the over the top fanfare associated to the international sporting event.

With online modes allowing those who splash out on the European themed DLC to compete against their friends and international rivals for tournament glory, the title also comes with an all new 'Expedition Mode'.

Have you already downloaded the UEFA Euro 2012 release? Were you miffed about the lack of an official Welsh side or did you not even notice? Let us know via the T3 Twitter and Facebook feeds.