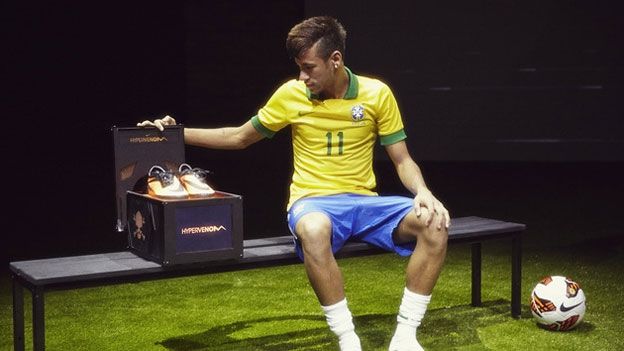 With the World Cup just around the corner and the Confederations Cup about to kick off, Nike has launched a brand new football boot silo - the Nike Hypervenom - in Rio de Janeiro, Brazil with Barcelona's big new signing Neymar on hand to unbox his pair.

The Nike Hypervenom Phantom boot - designed in collaboration with the Brazilian star - has been designed specifically to give attacking players increased agile traction, improved comfort and better touch.

"That's not just us saying it, the data backs this up. Players are covering more ground on the pitch which means spaces is tighter and the athletes told us they want to be quicker, not just in the foot race, but with the ball at their feet in tight spaces. The Hypervenom delivers that."

Nike Hypervenom: The tech inside

The new Hypervenom boot features the Nike All Conditions Control (ACC) technology for better ball control no matter what the British weather throws at you on a Sunday morning.

The surface of the boot boasts the new NikeSkin technology, bringing your foot closer to the ball to help deliver perfect close control. The outer sole is crafted from responsive-class nylon chassis boosting agility and traction. While the midsole has also been designed to amplify the natural foot shape, while the stud position allows for faster penetration to the pitch and quicker release, keeping players on their feet for better reaction times.

The striking orange and black design isn't just for looks either, the position of the orange touches highlight the parts of the boot that players use most to score goals, providing a visual aid to help improve your technqiue when you've got a split second to let loose at goal.

The distinctive orange and black boots are the first colourway in the new Hypervenom series which replaces the Nike Total 90 series and will be worn on the pitch for the first time when England taks on Brazil at the Maracana stadium on 2 June. Other designs will follow in the late summer.

"This boot is not only comfortable but beautiful," said Neymar speaking at the launch. Talking about his part in the design process he went on: "I worked with Nike designers and wore several prototypes before we found the perfect fit."

Players other than Mr Neymar that you can expect to see lacing up the new Hypervenom boots include Wayne Rooney, Mario Balotelli, Mario Götze and Eden Hazard. Oh and Danny Wellbeck.

You'll be able to buy the Hypervenom from July 2013 and the top-of-the-range boot will set you back £160.

Looking for new football boots for next season?

Check out T3's guide to the best football boots to buy right now.