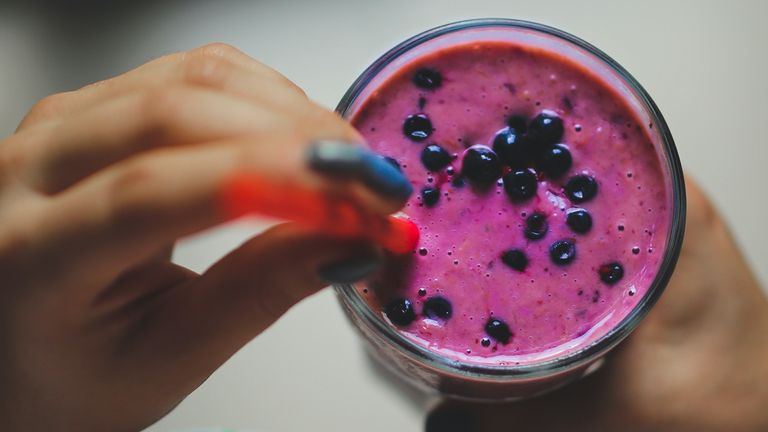 Nutribullet is one of the world’s most popular brands and the best Nutribullet is definitely up there with anything the blending world has to offer, at the price. Sure, its pre-eminence is partly down to absolutely ferocious marketing, but it's also thanks to the unique blending method it employs. It's also small enough to store easily, thanks to having a single-serve pitcher instead of a towering glass beer stein. Its success has led to a whole load of Nutribullet rivals, making it very much the Instant Pot of the blending and smoothie-making world.

If you fancy embracing the funky world of NutriBullet – perhaps you're trying a vegan diet – but haven’t a clue where to start, we suggest you start right here.

What you need to know about the NutriBullet

While it still uses a small four or six-pointed blade to mash ingredients into submission, the NutriBullet functions in a different way to normal blenders. Indeed, its creator Colin Sapire prefers it to be known as a ‘nutrition extractor’.

According to various sources, the NutriBullet’s high-speed cyclonic action is much more efficient at breaking down nuts, seeds and other hard ingredients that other blenders often miss. Consequently, if you pour the results of a NutriBullet smoothie into a sieve, there is usually zero evidence of any unblended ingredients; everything is literally liquified and that means more nutrients are extracted for, supposedly, easier digestion. The same cannot be said for most standard blenders which often struggle to completely pulverise ingredients like seeds and most nuts.

Another point in its favour is that, instead of using a large one-litre-plus pitcher attached to a base with a motorised blade, NutriBullets use an inverted process whereby you fill the container with ingredients, screw on a separate blade housing and invert the container before dropping it into the motor housing. This method allows for a more compact motor unit and smaller ingredient containers that are perfectly tailored for single-serve smoothies and easier storage.

What is the best NutriBullet?

Having weighed up the stats and examined the units in finer detail, our top spot goes to the entry level NutriBullet 600 Series (or simply NutriBullet as they call it Stateside) which has more than enough bang for the bucks. But if you want more power, then opt instead for the larger and more powerful 900 Series, aka NutriBullet Pro.

The best NutriBullets you can buy, in order of preference

The best NutriBullet for most people

Also known as the Original (or simply NutriBullet, in the States), this model is just about all you need for a regular dose of chunk-free enzymes, vitamins and fibre. With 600 watts of oomph under its bonnet, this little baby will liquidate even the hardest veg and fruit in a flash and clean itself afterwards with consummate ease.

Being the simple package it is, the 600 comes with a medium-sized 680ml pitcher, a shorter 511ml cup, a lip ring for sipping on the go without spilling liquid all over your pants, a lid to seal in the flavour and freshness, a recipe booklet and a guide to healthy nutrition.

If you fancy embracing the world of NutriBullet but don’t require bigger helpings, the extra power or a surfeit of accessories, then this is the model to opt for. Top tier blending at a very keen price.

Americans call this one the NutriBullet Pro but we’ll stick with the ‘900 Series’ moniker because that’s how it’s marketed here in the UK. This is the one to grab if you want a bigger smoothie and a bit more power at your fingertips. The 900 Series features a 900-watt motor that spins the cleverly designed six-prong blade at 25,000rpm. It comes with a 909ml main container, a smaller 680ml cup for more modest sized blends, a flip top lid, a ‘stay fresh’ lid, a lip ring and recipe booklet.

We should add that this model is pretty damn loud so perhaps avoid using it first thing on a Sunday morning while everyone else is having a lie in. A number of American users have also reported leaks between the bearings and the main seal but, in the main, the vast majority of owners are over the moon with their purchase and who are we to argue the toss?

If you need advice on the best ingredients to use or you simply want to try some different recipes, consider this ultra-powerful 1,200-watt nine-piece model that works in conjunction with the NutriBullet Balance app (Android and iOS). Simply log on to the app via Bluetooth and you’ll have instant access to hundreds of recipes, step-by-step guides and valuable real-time nutritional information. You can even customise your own ‘wellness goal’ by selecting your eating style (low calories, high protein, diabetic, low carb etc).

The Balance comes with a range of accessories, including two plastic 0.93-litre jugs and two flip-top lids with drinking spouts for sipping on the move. Its Smart Nutrition sensor, meanwhile, weighs the ingredients and calculates their nutritional value before porting the info to your phone. What a clever little sausage.

•Buy the NutriBullet Balance from Argos

Fancy a soup in seven minutes flat or a smoothie in about a minute? Reach for this high-powered option which features an ultra-pokey 1,700-watt motor, three different sized containers – from 850ml to 1,275ml – and a great recipe book with multiple choice questions that link to a specific recipe for your needs.

As with all NutriBullet models, the motor starts the moment you insert the whole container and blade housing into the base unit. For smoothies it will automatically run for one minute before switching itself off. If you need it to blend a bit more, simply lift the whole caboodle out of the base unit and drop it in again.

For soups, grab the included one-litre 'Souperblast' pitcher – cheers, clever word play. Then fill it with soupy ingredients, screw on the blade housing and drop it into the main base. Now hold the Souperblast G button on the front until it lights up in red. The machine’s integrated heater will kick in while the blade pulverises everything into a lump-free consistency. It helps if you like your soups blended into what a sometimes resembles an unsightly mush but, hey, each to their own.

Here’s one for the kiddies; well not as in ‘here you go, Johnny, a little blender for you to play with’. That would be a bad thing, and probably very messy too. No, this cute little fella is just the ticket for puréeing your own healthy baby food without too much hassle. The package includes a batch bowl – simply fill with healthy stuff, invert and push and twist into the main base – two stumpy cups with big handles for serving and six sealed single-serve baby cups with integral ‘made on’ date dials.

The 200-watt motor is more than powerful enough to blend any pre-cooked vegetables and most fruits and loose leaves. The flat milling blade, meanwhile, will also handle oats and other grains with relative ease.

The majority of users have nothing negative to say about this product though one or two have mentioned that some obstreperous veg like butternut squash and parsnips can tend to be missed by the spinning blade.

If you’d rather avoid using commercially produced baby food and don’t mind the slight faff involved with making your own, then give this little titan some consideration.

This full-blender-sized model isn’t available in the UK just yet but you can purchase it through Amazon US in the meantime; just be mindful that it comes with a two-prong US plug.

Standard NutriBullet machines are quite radically different in design to other blenders on the market but, given that this one is essentially a standard work-top blender, the US company may find that competition is a lot stiffer in this arena. Nevertheless, user reviews suggest it can more than hold its own when pitched against established brands such as Vitamix, Blendtec and KitchenAid.

The NutriBullet Blender utilises a 1,200-watt motor that provides the six-pointed blade with enough horsepower to crush ice and turn most hard vegetables, dense fruit and loose leaves into silky, lump-free sustenance.

In many ways, this standard system is easier to use than normal NutriBullets because you don’t have to worry about screwing caps on firmly enough to prevent leaks. Simply fill the super large 1.8-litre container with ingredients of your choosing, tap the Low, Medium or High settings and retreat. As it has a vent on the side, this model can also blend pre-heated ingredients. However, it can’t make a hot soup from scratch; for that you need the RX model reviewed above.