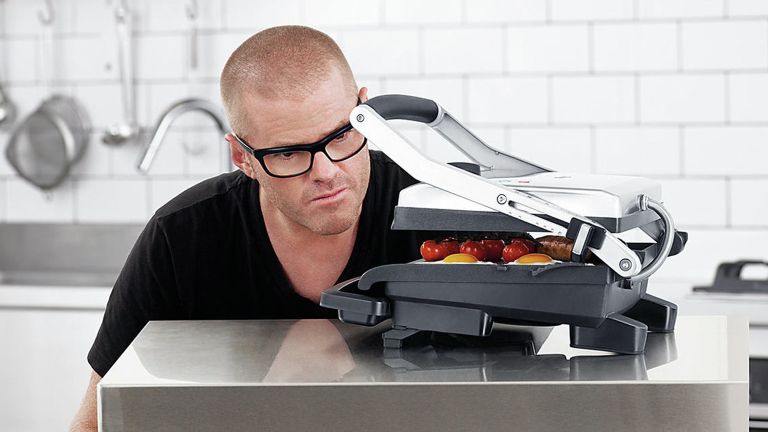 Hulk Hogan made a costly error when he chose not to throw his considerable weight behind a certain lean, mean, fat-grilling machine. The George Foreman may or may not be the best grill you can get, but it sure as hell did better than the Hulkamania Meatball Maker.

With over 100 million griddles bearing the former world heavyweight champ’s name sold worldwide, Big George's device is the market leader, but when it comes to choosing the best portable grill for healthy cooking there are numerous other contenders – it’s no longer a unanimous decision in favour of Foreman.

What is the best grill?

As usual with Sage it’s by no means the cheapest of the bunch, but a one-two punch of clever features and attractive, industrial styling elevate it above the competition.

How to buy the best grill

Whether it’s sizzling steaks, seared skewers, toasted sandwiches or cooked vegetables, these grills are a quick, easy and healthy option for a whole range of meals, as they reduce the amount of artery-clogging fat that seeps into your food, by draining it off during cooking.

This isn’t much different to how the grill in your conventional oven works, but there are some key advantages to tempt you into buying one. For a start, they’re rapid and cook most things in a fraction of the time – look out for models with quick heating times.

Secondly, they aim to make food tasty by keeping meat moist and not overcooking it, so check for smart features that identify what you’re cooking and select the perfect grilling time to match.

Finally, they cleverly funnel any unhealthy fats into a special container, meaning the bad stuff goes in the bin rather than your body. With that in mind, convenience should also be extended to cleaning, so removable, dishwasher-safe griddles are a clear plus point.

Massive meat machine is the best grill by far

It's not just the name that’s a mouthful with this feature-packed grill. You can just use it freestyle if you prefer, but its killer feature is an integrated probe for checking the internal temperature of your food – it's most useful for meat, of course.

In auto mode, an alarm sounds when it's reached your favoured grilling level, from rare to charred, letting you know when it’s time to let meat rest so it retains moisture and is ultimately juicier, tastier and more flavoursome.

So, just tell the Smart Grill Pro what you're cooking – there are specific cooking modes for beef, lamb, pork, poultry and fish – stick the probe in and it does the rest. There’s a useful LCD display and a 180-degree opening. That's handy for eggs and pancakes, and also means it can double as a back-up barbecue when British summer inevitably goes wrong.

The grill can be set at a height or angle to suit what you’re cooking, and the grill plates are removable and interchangeable, with one ridged and the other flat. They’re not dishwasher safe though, which is a bit of a pain.

Given its size and price, the Smart Grill Pro can be considered a rather more serious proposition than the other grills here. You should either be intending to use it very regularly, or have an enormous kitchen that it can be stashed away in.

-No smart features, or even a timer

What Lakeland’s budget grill lacks in terms of cutting-edge tech and smart features, it makes up for in versatility, affordability and consistently good cooking.

It’s called a fold out grill for a reason and shares the Sage’s 180-degree opening, along with five height settings. The grill plates heat quickly and can be angled to drain fat more efficiently for healthier cooking. They’re also dishwasher friendly.

The Lakeland offering requires you to think for yourself when it comes to cooking, although the instructions include approximate timings for a wide range of foods. There's not even an alarm, although obviously you can use an external one or your phone.

French brand Tefal has taken its country’s gastronomic reputation to heart and packed what feels like an entire commis chef inside the Optigrill+.

As with the Sage grill, you can stick what you want under the grill, press a button illustrating the food type and the Tefal uses sensors to measure the thickness of the cut and automatically adjust the cooking time. It even detects how many items are on the grill, adapting time and temperature accordingly.

In practice, it works perfectly with an LED indicator changing colour as you progress from rare to well done, with an audible alert at each stage.

The controls are unnecessarily difficult to get to grips with, the overall design and lighting is crude and no open flat grilling restricts the grill to a 90-degree operation only. However, if you're only an occasional griller, this would make an excellent, more compact, alternative to Sage's King Kong-sized griller.

A full grilling system from the kitchen heavyweight

The pièce de résistance of Hefty George’s lean, mean, red grilling machine is a 'Super Sear' function claiming to offer restaurant quality steak with a short, intense, 260ºC burst of heat to seal everything in, before reverting back to its usual cooking temperature.

While you'd have to debate the 'restaurant quality' part of that, there's no denying Foreman grills are reliably effective. Flat grilling is available for toasting sandwiches as well as grilling vegetable and fish, and the angled plates do a solid job of draining fat.

We’re not particularly struck on the design, which is more premium than some older Foreman grills but nothing like the quality of Sage or Lakeland's rivals. We have also heard stories of the plates being replaced sooner than envisaged.

Even so, given that it can also cook omelettes, pizzas, curries and more, thanks to a welter of removable plates and pan designs, the George Foreman Evolve 21611probably justifies its entry price.

Perfect cheese on toast thanks to a Foreman-exclusive feature

The 14525 is the only George Foreman to feature a combination of removable plates and a unique grill and melt feature.

In short, this means the lid and top griddle can be locked in place to hover just above what you’re cooking, so it gloriously melts whatever you place beneath it. The built-in timer comes into its own once you’ve perfected your cheese on toast techniques.

The smaller cooking surface might prove a hindrance for families or dinner parties and its low power output means heating up and cooking seem slower than others listed here. For the price, it's still a decent device.

-Underpowered-Not so good at draining fat

Americans love a grilled cheese sandwich, so US brand Cuisinart has here come up with something that's midway between a panini press and a grill.

The look won’t be to everyone’s taste. Unlike Sage's design, which is like something from a commercial kitchen, but tarted up for posh homes, this wouldn't look out of place at your local caff. It's a necessary evil though, to accommodate the reversible griddle design. It means you can have dual ridged plates, dual flat plates or a mix of the two.

A floating hinge makes accommodating bigger items easy and when fully opened at 180-degrees, it easily caters for dinner parties and larger events.

Heating is fast, even though the wattage makes it appear a tad underpowered on paper, and the griddles are dishwasher safe. That's just as well, mind you, as the lack of an angled design means fat tends to congeal rather than drain. Again, the Americans tend to like that.