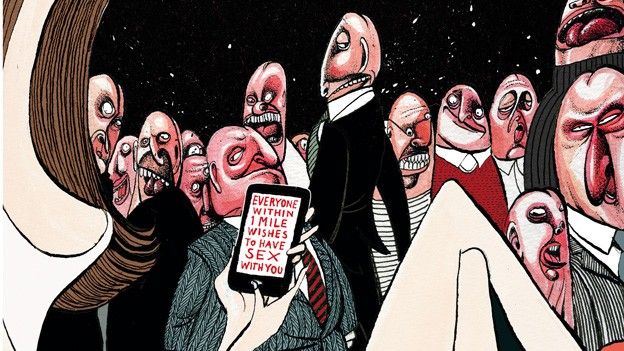 With technology and the adult world ever advancing into each other's arms, we take a quick look at how tech has changed the way we 'hook up' forever...

Whether your phone, PC, or television is hooking you up with real, flesh-and blood people, virtual partners or jaded women in call centres, thanks to gadgets it's never been easier to get your rocks off. You could take a moment to mourn the death of romance, but you're probably far too busy getting on with “things”…

Pub closing is peak time for these stations that sit at the arse end of the EPG and invite you to live "chat" with a selection of busty, bored ladies lying awkwardly on pink sofas or shiny men doing bicep curls with tiny weights. These "hot" specimens are "in your area waiting to hear from you!". But pick up the phone and you'll be charged £1.50 for every minute you drunkenly wait for your chance to ask, "What are you wearing?"

Back in the early days of the web, this was the way to meet and enter people, at least if you could find one that wasn't filled with people slinging insults at each other. With everyone now using social networking, chatrooms are currently populated entirely by dinner ladies from Basildon pretending to be pert sexual gymnasts.

Some people are looking for a SWF (single white female) with a GSOH (good sense of humour), while others are looking for NSA (no strings attached) sex. But it's not all one rosy, acronym-littered, speed-dating night online. Beware: that 25-year old SWF may be a middleaged dinner lady from Basildon, with a profile picture nicked from Google Images. No SOH is G enough to help you get over that.

Facebook's killer feature? In the cold light of day you can check out exactly what that person you met the night before actually looks like. You could also use it for a bit of heavy poking, like 23-year-old Laura Michaels, who started a Facebook group called "I Need Sex". It attracted over 100 users, 50 of whom she slept with. "I was satisfying my own desires by setting up the group," explained Michaels to The Sun. The group has since been removed.

"You remember Kathy? That weird girl in your class who was obsessed with cats? Well now she's a model at Storm." Cue you frantically logging on to Friends Reunited and messaging her about how you secretly always did love cats. Sadly, with the site's popularity having plummeted, your chances of finding a cat-fancying honey under the age of 76 are now negligible.

This location-based hook-up app is a gay phenomenon. You upload basic info and then Grindr uses GPS to point you to all the soinclined gentlemen nearby. You can then IM or exchange pictures using the app. London has more, ahem, members than any other city in the world. A hetero version, codenamed Project Amicus, is in the pipeline but support for it isn't high, with 77 per cent of UK smartphone users thinking it's a bad idea, according to MyVoucherCodes. co.uk. Then again, "chastity belts" and "cold showers" are two of the most popular search terms on that site. Probably.

Roxxxy is an "anatomically correct" sex robot. She has several preset personalities including "Wild Wendy" and "S&M Susan" and motors in key areas - sorry, we need to go and wash after typing that. She even shudders to simulate orgasm. It's just a shame Roxxxy's got a glazed expression and a chin that would shame David Coulthard. Oh, and that she's a f**cking robot. Yeesh.

Pamela Anderson was first. Then Paris Hilton recorded herself spending one night with Rick Salomon, John Leslie squandered his chances of ever presenting Blue Peter again, and Jordan proved that she actually does have one talent. Soon everyone had a sex tape out, inspiring couples the world over to shout "action" and get down to it. Cameraphones: so much to answer for...

Spending on flirting and dating services on mobiles went up 36 per cent last year, to £34.7m, according to premium rate regulator Phonepayplus. Perhaps unsurprisingly, 63 per cent of the users were male, sending gifts like a virtual kiss - the technological equivalent of a Love Heart, without the nutritional value. Save your credit and get creative like the chap who turned his wife's Mac desktop into an anniversary message - check it out here

Spam is a bit like Piers Morgan: irritating and hateful yet it keeps on coming back, so one can only assume somebody, somewhere must like it. Viagra emails not only clutter up your inbox, they cause grave disappointment to millions of men too shy to go to their GP, who are unaware that purple Refreshers filed down into a diamond shape can not, in fact, put lead back in their pencil.

We once spent a lonely Friday night playing an online sex game called Red Light Centre (it was research for a feature, mum).This involved trawling bars looking for action, but once you located your prey the experience was far from erotically charged. Among the set phrases you could choose from during sex were "Wow" and "Lick my balls, woman".