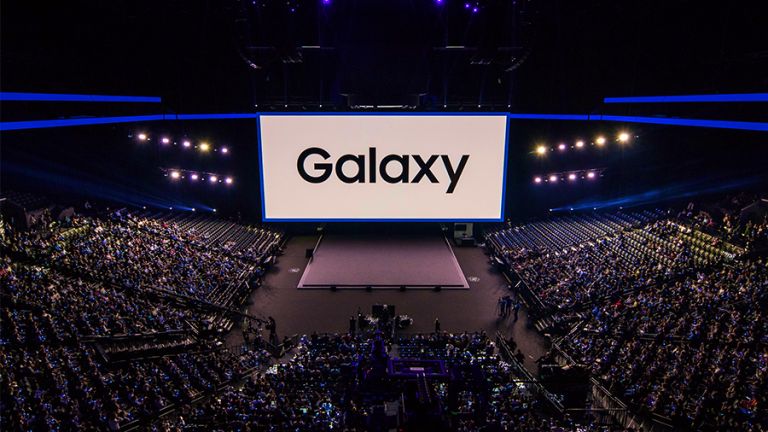 Samsung has held its feverishly-anticipated Galaxy Unpacked event in New York City, which took place August 7, 2019, at 1pm PST / 4PM EDT / 9PM BST. The Samsung Note 10 and Samsung Galaxy Note 10+ smartphones were unveiled, and all the action can be caught up with via the official live stream launch video (directly below).

We've also got all the information about Galaxy Unpacked's other big product announcements, the Galaxy Watch Active2 and Galaxy Tab S6.

Both phones are thinner than 8mm.

The front camera cutout is now smaller than the Note 9 and centre-mounted, while the screen hides an under-display ultrasonic fingerprint reader.

Samsung's digital S Pen stylus makes a return in the Note 10. The S Pen is also included with the new Galaxy Tab S6 tablet. Price is $649, release date is August 23.

The Note 10's S Pen has a new six-axis sensor with accelerometer and remote control function. To get started you hold down the S Pen button and the camera opens, while with the S Pen's motion tracking feature you can select modes and zoom by gestures. Press the button once more to take a picture or video.

These motion controls work in YouTube. Play, pause and skip can be achieved without touching the Note 10's screen.

The S Pen has a new and improved battery, too. It still recharges when docked back inside the phone.

The Note 10's camera system delivers and end-to-end video experience. You can now apply bokeh in videos. There is a new Super Steady feature as well for videos shot on the Note, which automatically quells shakiness.

There is now a piece of editing software that comes pre-installed on the Note 10 as standard.

You can now make your own AR stickers on the Note 10 with AR Doodle. By combining the S Pen and the phone's camera system users can live draw on the phone's screen to create crazy 3D AR stickers to place on people, objects or places. Stickers have depth, too, which is tracked by the Note 10.

The Note 10+ comes with Samsung's new DepthVision Camera. This camera allows for 3D scanning of people and objects. The scanning takes seconds and then the 3D models immediately are created on screen. This model can then be mo-capped by tracking a user's movements.

In terms of gaming the Note 10 delivers an "epic experience". This is because it has a vapour chamber cooling system to keep the device cool, even during intense gaming sessions. The Note 10 devices also have a game optimiser to make them run better.

Battery-wise, the Note 10 supports Super Fast Charging up to 45 watts, which allows a full day charge in just 30 minutes.

There is a Samsung Galaxy Note 10+ 5G model which delivers a 5G mobile connection.

Samsung Knox, the firms security system, is built into the Note 10 from a CPU level up.

The Galaxy Watch Active2 is here, too. Prices start at $279 and it hits store shelves September 13.

There's a new member of the Galaxy family: the Samsung Galaxy Book S. It's a 13-inch touchscreen laptop that comes in two colourways. It's powered by a Qualcomm chipset and connects directly to Samsung phones. The battery lasts 23 hours. The Galaxy Book S is available to buy in September.

"Every device we make is designed to make your life better" is how Samsung close the event's product announcements.

There has been no shortage of rumours around the much-anticipated Galaxy Note 9 successors, including reports that its Galaxy Note 10 series will ship in two sizes – each with a 4G and 5G variant, boast a tweaked Infinity-O design, kill off the 3.5mm headphone port, feature dramatically improved zoom capabilities, and sport a very Huawei-like colour palette, all with an eye-watering new price tag.

We will find out exactly which of these rumours was accurate during the launch event tonight, which is scheduled to kick-off at 1pm PST / 4PM EDT / 9PM BST.

If you're already confident that whatever Samsung mobile chief DJ Koh unveils on-stage tonight you're going to desperately want one – you can already register your interest to be front of the queue when pre-orders for the Galaxy Note 10 series go live. Registering takes a few seconds on Samsung's official website.

The latest Galaxy Unpacked event comes after a busy few days for the company, which announced its Galaxy Tab S6 tablet – complete with its own S Pen stylus and iPad Pro-battling screen – last week, and Galaxy Watch Active2 just a few days ago.

Whether Samsung will use its latest Galaxy Unpacked to announce new details on the delayed Galaxy Fold is unknown. But with a rescheduled release date set for September, it seems unlikely there'll be another event before the launch.

T3 will bring all the latest news from Galaxy Unpacked as it happens, to stay tuned to find out the latest about the Galaxy Note 10 series, Galaxy Fold, and more.