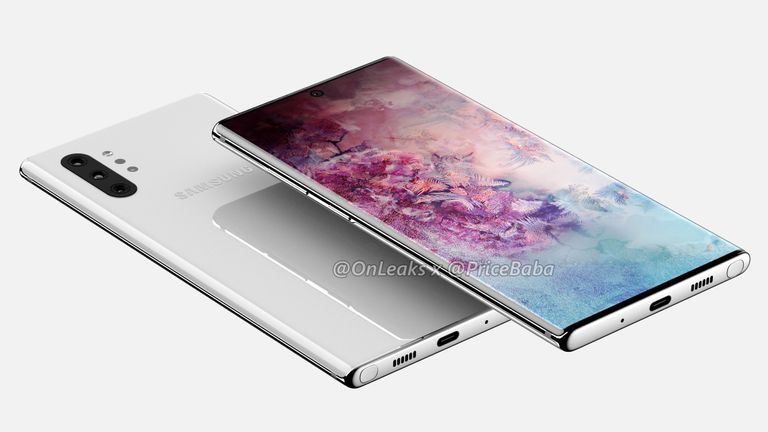 Those who are desperately holding out hope the wide-spread rumours are false and Samsung will still include a 3.5mm headphone port on its next entry in the Galaxy Note series should look away now.

More evidence that we're about to bid farewell to the once-ubiquitous 3.5mm audio port has emerged online. Yes, after years of selling its defence of the port as one of the biggest differentiators between its smartphones and the competition, Samsung now looks set to follow in Apple's footsteps and act like it don’t know jack.

The latest evidence the headphone port is living on borrowed time comes courtesy of serial leakster Ice Universe, who has published a new series of three-dimensional renders of a protective for the as-yet unannounced Galaxy Note 10.

The protective case renders seemingly confirm a number of details we've previously seen rumoured about the Note 10, including the vertically-aligned rear camera array, which looks much closer to the design on the back of the Huawei P30 Pro and iPhone XS Max than anything else in the Galaxy Note series so far.

The case features the trademark cut-out for the S-Pen stylus on the bottom of the handset beside the USB-C port. But alas, there's no hole for the 3.5mm to be found.

Of course, the Galaxy Note 10 won't be the first time Samsung has turned its back on the 3.5mm port. The Seoul-based company already dropped the audio connection from the Galaxy A80 back in May. The Samsung Galaxy A8s and Samsung Galaxy Fold also ditched the 3.5mm connection, although the latter does ship with a free pair of Galaxy Buds to ease the move away from the industry-standard port.

It's unclear exactly what the benefit of dropping the port from the Galaxy Note 10 will be, but Samsung will need to have an answer prepared for its customers.

When rival OnePlus dropped the headphone port from its OnePlus 6T flagship, it said that it made the decision because it enabled it to squeeze more battery into the frame – and that Bluetooth headphones had improved enough that it believed it was worth the trade-off. It's not a perfect answer by any stretch of the imagination, but it's something at least.

Elsewhere, Galaxy Note 10 is expected to tweak the holepunch camera display design, dubbed Infinity-O, that debuted on the Galaxy A8s, before rolling-out to the Galaxy S10e, Galaxy S10 and Galaxy S10 Plus earlier this year. For the first time, the Galaxy Note series is widely-tipped to come in two different versions – a more affordable Note 10e, and a Note 10 Pro. The Galaxy Note 10e will purportedly sport a 6.3-inch display while the pricier Galaxy Note 10 will feature a 6.7-inch screen. Both flavours will ship in separate 4G and 5G versions for a total of four different Galaxy Note 10 models available on shelves worldwide.

As always, these are just rumours, so take it all with the recommended pinch of salt.