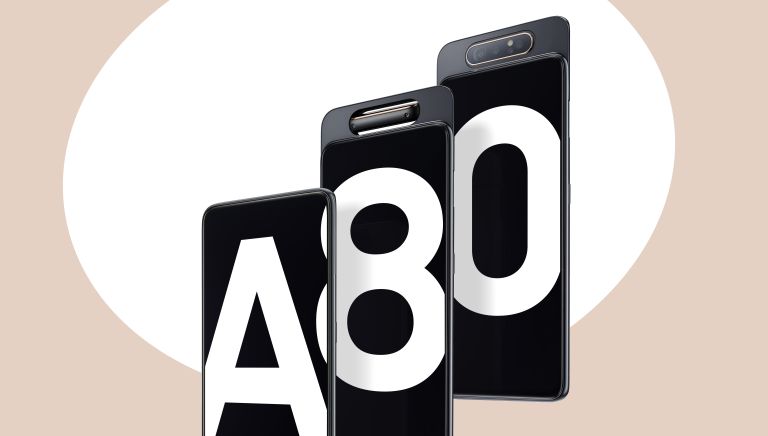 Samsung has taken the wraps off its brand-new Galaxy A80 – not the A90 as many thought. It's the first Galaxy smartphone with a truly all-screen design, enabled by a very innovative camera system.

Samsung has gradually been shrinking the size of the bezels around its screens throughout the last year, starting with the thinner borders on the Galaxy S9, followed by the hole-pinch Infinity-O design on the Galaxy A8s and Galaxy S10 range. This, however, is a step up again. The 6.7-inch Full HD+ Super AMOLED screen on the Galaxy A80 covers the entire front of the handset.

Samsung says there are 'no distractions' when you watch video, look through photos, or run multiple apps simultaneously – which seems like a bit of a kick in the teeth if you've recently splurged on an S10, especially the pricier Galaxy S10 Plus which has a bigger, more unsightly, pill-shaped cut-out for the dual front-facing selfie cameras. The A80's display isn't even interrupted by a speaker grill, since the sound is emitted through the glass itself. Rival Huawei used the same technique in its flagship P30 Pro.

When it comes to the front-facing camera, the element that typically takes up the most space in the notch or hole-punch on the front of a smartphone, Samsung has a genuinely unique solution.

The Galaxy A80 slides down to reveal a separate drawer behind the screen, but rather than housing a separate selfie set-up like we've seen on the likes of the Xiaomi Mi Mix 3 and Honor Magic 2, Samsung simply rotates the rear-mounted camera system, so you get the fully-featured array pointed straight at your visage.

That means you're able to use a number of features that, until now, were reserved solely for the rear-mounted camera, including ultra-wide angle shots, an LED flash, OIS video capture, and the depth-effect Live Focus image.

You'll also be able to enable this bokeh-style blur to the background of videos with the Galaxy A80 – a feature we first heard about for the Galaxy S10 5G, something we had thought would be exclusive to this handset, which has six cameras to enable this effect on the front- and rear-mounted cameras.

The rear-cum-front-facing camera array on the Galaxy A80 is made-up of a 48MP main camera, coupled with a 3D Depth camera that offers Live Focus videos by scanning objects for measurement and depth. There's also an 8MP camera with an ultra-wide lens with 'the same viewing angle as the human eye' – so you shouldn't miss anything out of the viewfinder that you're able to see when framing up your shot.

Samsung is committed to offering the highest possible screen-to-body ratio. Until now, we thought its Infinity-O display design, as seen on the S10e, S10 and S10 Plus, was the best way of reaching that goal – at least until it manages to seamlessly embed the selfie cameras beneath the screen, something it has previously revealed will take at least another two years to achieve.

However, it's possible the Galaxy A80 is the first glimpse at the design we can expect to see roll out to the next batch of flagship smartphones from Samsung.

If you're wondering why Samsung would unveil the latest and greatest innovations to its mid-range handsets before the priciest devices in its portfolio, it's because Samsung mobile chief DJ Koh believes this is the key to keeping ahead of the intensifying competition from the likes of Huawei and Xiaomi.

Elsewhere, the Galaxy A80 has a 3,700mAh battery that works with fast wired charging at 25W, which should mean you don't have to be tethered to the wall socket for too long when the smartphone finally runs out of juice. Samsung says it has built-in an intelligent battery system into the A80 that learns your daily routine and app usage patterns to optimise power consumption too.

Unfortunately, there's no 3.5mm headphone port here, so you'll be forced to use a USB-C wired headphones, Bluetooth, or a 3.5mm-to-USB-C dongle. There's also no expandable storage via microSD card – a staple on most other Galaxy handsets – so make sure you buy the correct amount of storage, as you can't increase it later on after you've snapped a few hundred high-resolution selfies with that stellar camera.

The Galaxy A80 is available in three colour finishes: Angel Gold, Ghost White and Phantom Black. The Angel Gold colour includes elements of pink, while the Ghost White option has a few shades of blue hidden in there. Like the P30 series, these graduated finishes really only sparkle and reveal all their shades in direct sunlight.

'Consumers are at the centre of everything we do and they search for devices personalised to their specific lifestyle. Armed with our expertise, global capabilities and rich consumer insights, Samsung is uniquely positioned to provide innovations for everyone,' added DJ Koh who sadly, despite a lot of musical performances at the A80 launch, did not at any point do any DJing.

'The Galaxy A Series provides a range of models so everyone can choose a device that fits their unique needs and enables them to pursue their passions. The Galaxy A80 offers premium features for digital natives who want to fully engage in the Era of Live.'