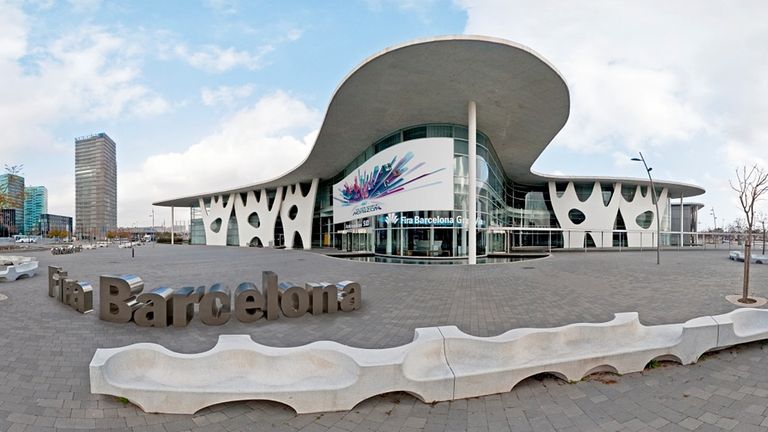 MWC 2019 is here. Or at least it is if you're a journalist rushing between pre-event briefings. MWC (Mobile World Congress) is where the phone industry descends on Barcelona to talk shop, when not sat in traffic jams. That means mucho smartphone launches and exciting developments with high-speed 5G devices and 5G networks.

In MWC years gone by we've seen flagship handsets like the Samsung Galaxy S9 and LG G6 make their debut, and MWC 2019 will be our best chance yet to see what today's biggest phone makers have to offer for the next 12 months.

Samsung released its big phones at its Unpacked event this year but there is still a huge buzz around MWC 2019. That's because this is the the year of folding phones and 5G, which both feel new and important, and also because the new breed of Chinese mobile brands are all innovating like crazy at the moment, finding ways to pack new and cutting-edge features into often comparatively affordable phones.

Here, then, is our bumper preview-cum-review of this year's Mobile World Congress.

This year Mobile World Congress is happening from Monday 25 February to Thursday 28 February. Some of the major players usually schedule press events beforehand, so news is going to start appearing on Saturday 23 February and Sunday 24 February.

Everything happens in Barcelona, primarily at the Fira Gran Via event hall. The show isn't open to the public, by the way – you have to be in the industry or a member of the press to get a ticket, but we'll be there and we'll keep you right up to date with everything that's happening.

If the big stories of MWC and smartphones in general in 2019 are 5G and folding phones then Huawei seem to have it nailed, as it's just formally announced the Huawei Mate X, which is both foldy, and 5G-ified. Screen stats: there's a 6.6-inch front screen with 19.5:9 aspect ratio, a 6.38-inch rear screen with a 25:9 aspect ratio and when you fully unfold the X, you're presented with an 8-inch tablet, 'FullView' screen with 8:7.1 aspect ratio and 2,480 x 2,200 pixel resolution.

We'll have a hands-on review shortly but if appearances are anything to go by, you might want to reconsider any Samsung Fold shopping plans you had.

Before they got on to the Mate X, there was also word of the Huawei Matebook X Pro, which looks set to give Apple's MacBook Pro a run for its money. It's a Windows laptop that weighs just 1.33kg and has a battery that lasts 12-14 hours.

There was a rather heavy 'hint' of this in Huawei's billboard at the MWC venue, so this did not come as a huge shock but it's still a highly impressive device.

Huawei did not launch its Huawei P30 and P30 Pro phones at MWC 2019, as those handsets have been confirmed by Huawei for a Paris launch on March 26.

Also bounding onto the 5G bandwagon with a mighty leap is China's Xiaomi. Its Mi Mix 3 will also feature 5G, and cost just £520 when it debuts in May 2019. This affordable marvel democratises access to 5G by sitting on a platform built from Qualcomm's Snapdragon 855 SoC and its Snapdragon X50 modem. Even better, a cooling system built around a six-layer graphite heat pipe should mean this platform doesn't melt in your hands like chocolate.

Aside from some business-oriented VR accoutrements for its Vive system, the big news from HTC was the HTC 5G Hub. This is intended to replace wired routers, once 5G becomes commonplace, with outrageous speeds, low latency and the option to use it as a big mobile dongle, thanks to a built-in battery.

As with many of these 5G innovations, the 5G Hub is built on Qualcomm's 5G platform. Qualcomm was also at MWC, of course, showing off the next generation of its chips.

Although we don't exactly know what Honor will be announcing at MWC, the company has sent out media invites for a briefing on Tuesday 26 February which, by our watch, is today.

The invite  is titled "See the game changer" which hints at a phone that's optimised for gaming. In other words, a fast one with AI smarts, quite possibly powered by the same Kirin 980 processor that's in the Honor View 20. Or perhaps the View 20 is the phone that the invite refers to. We'll be at the event so we'll let you know…

Sony usually concentrates on improving its Xperia phones' cameras and screens, whilst largely ignoring recent fashions in phone design. So at MWC, there was nothing foldable or 5G from Sony, but it did offer phones with movie-friendly 21:9 screens and very strong camera setups.

It also innovated in the all-important area of what it calls its phones, with the new flagshIp being called simply Sony Xperia 1. With a widescreen, 6.5-inch 4K OLED display up front and a triumvirate of 12-meg cameras to the rear, it's a highly competent smartphone, if not perhaps the most exciting.

Sony also took the wraps off its mid-market Xperia 10 and 10 Plus. Again, they employ 21:9, ultra-wide screen, for all your movie-viewing needs.

While the new device packs lighting fast 5G connectivity, which would make it a direct rival to Samsung's 5G Galaxy S10 and Huawei' Mate X 5G (see above) in 2019, contrary to certain rumours in the run-up to MWC, there's no camera system that packs 16 lenses. It just has a frankly piffling three rear-mounted cameras and two front-facing ones. What is the world coming to?

It's not really a folding phone in the way that the Mate X and Fold are, but there is the option of attaching a second screen, to give you something a bit like a next-gen Nintendo DS.

What hasn't been announced about the new 5G LG phone, though, is its internal hardware specs. However, the rumour on the mobile grape vine right now is that it will come loaded with Qualcomm's new flagship Snapdragon 855 processor, as well as a beefy 4,000 mAh battery.

Unlike some 5G devices that have already been announced, LG has also confirmed that the phone will be available outside of South Korea, too, with the European and North American markets a big focus.

Also unveiled were the LG G8 ThinQ as well as other mid-range devices.

While the G8 ThinQ isn't as expensive or as flashy as the 5G handset, it will feature an innovative technology that utilises the phone’s OLED display as an audio amplifier. Crystal Sound OLED (CSO) repurposes the display as a diaphragm, vibrating the entire surface to produce what LG promises is "sound with impressive volume." We're looking forward to trying it with some heavy dubstep at the launch.

Both the LG Q60 and LG K50 are powered by a 3,500mAh battery while the K40 gets a smaller 3,000mAh unit. All three handsets feature a dedicated Google Assistant button, fingerprint sensor and DTS:X 3D Surround Sound.

While LG's new 5G flagship might only have had a mere 2 front-facing cameras and 3 rear ones, Nokia (HMD) properly pushed the boat out with a five camera array on the back of its Nokia 9 Pureview. Everyone is now familiar with the idea that pure megapixels don't make a great camera, but this has 60 megapixels and five lenses, so you'd have to assume it can take decent photos.

The lens array looks slightly grotesque, like a spider's eyes, but it can successfully focus on subjects anywhere from 7cm to 40 metres away and lets in more light than standard phone cameras.

• Feast your eyes on the full splendour of Nokia's 9 PureView mega cam.

Samsung traditionally puts on a big show at Mobile World Congress, but MWC 2019 will be slightly different: the Samsung Galaxy S10, S10 Plus and S10E were launched just before the event.

All those handsets made a second appearance on Samsung's stand at MWC, alongside its fitness wearables and watches.

It's still a little early for the OnePlus 7, although some suspected this 'disruptor' brand was being extra disruptive at MWC, by 'showing' its 5G flagship encased in a lump of plastic thick and ugly enough to render it effectively invisible. Or maybe that was some other thing.

Oppo were in attendance as well, but they blew their – aha ha ha – Oppo-tunity to launch a 5G phone. Back in China, however, it leaked images of Oppo's contribution to 2019's trickle of foldable phones – a concept that, er… won't ever come out. Oppo VP Brian Shen feels foldable phones don't yet offer enough improvements for its customers, which is a fair enough point of view.

We did get a preview of Oppo's new camera technology, which offers up 10x optical zoom.

For lovers of bling, and those who hanker for the glory days when will.i.am made tech, the show was stolen by Nubia. The Nubia Alpha is a phone with an eSIM, bent into a gold-coloured, bangle-like wearable with not one but two crowns. It also has a matching pair of true wireless buds for taking calls and listening to tunes.

It's the sort of thing that causes a stir at events like this by virtue of being different, and everyone here having a hangover. Such devices then tend to vanish without trace, so enjoy it while it lasts.

Apple: No. Google: No, or at least not as a handset maker.

Both Apple and Google usually save their phone launches for their own events. Apple doesn't like mixing with its rivals so will be a MWC 2019 no-show, although Google was here, supporting its Android partners and promoting its mobile offerings. If you want new devices you'll have to wait. The Google Pixel 4, Pixel 3 Lite, new Google Home and Pixel Watch will all be coming later this year.