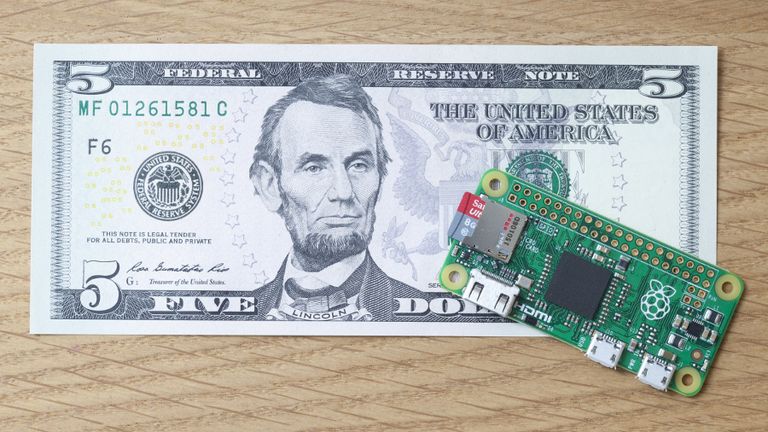 So you want a computer, but you don't want to spend much money? As luck would have it, the Raspberry Pi Foundation has produced a new tiny board which will lighten your wallet by less than a fiver.

In fact, the Raspberry Pi Zero retails at just £4 ($5 over in the US), and for that you get an extremely compact system powered by the Raspbian OS, capable of running games such as Minecraft Pi.

It's so small at 65 x 30 x 5mm – check out the image above of the board relative to a $5 bill – that they've even bunged it on the cover of a magazine (the MagPi, the official Raspberry Pi publication from the makers).

Not only is it almost a third of the size of the original Raspberry Pi, it's considerably more powerful. The Broadcom BCM2835 processor runs at up to 1GHz, and it's 40% faster than the first Pi.

You also get 512MB of SDRAM and a microSD slot, along with a mini-HDMI port (facilitating 1080p video output at 60 fps) plus micro-USB sockets.

This even cheaper Pi offering means that anyone interested in making a start on coding or tinkering with computers in general won't find price to be a barrier preventing them from getting involved – hopefully even in poorer nations, as well.

The Raspberry Pi Zero is available now in the UK from the usual resellers as listed on the official blog post launching the computer – the makers note that demand might outstrip supply, at least to begin with. Stocks are holding up at the time of writing, though.

Another recent innovation for the Raspberry Pi is this 7-inch touchscreen, which turns the mini-computer into a small tablet PC for just under £50.

Also check out: How to install Windows 10 on Raspberry Pi 2