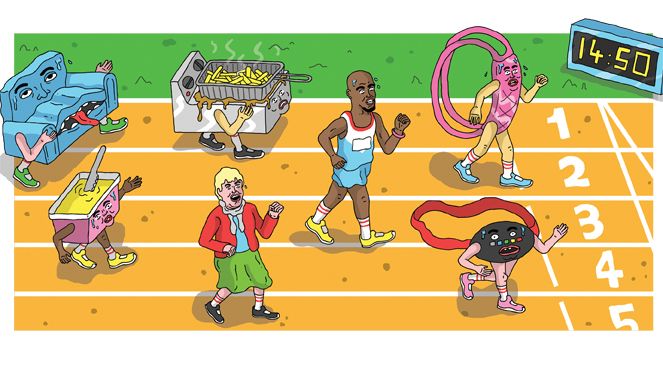 How can I prove that  I'm fitter than my mates?

When GaGu was in the SAS, the classic way to prove one's fitness was to race from one end of a field to the other, pulling a tractor tyre behind you, while one of the lads fired a machine gun at your feet to speed you along. Whoever threw up first lost.

Today, rampant political correctness means machine-gunning friends and relatives as they work out is somehow frowned upon. You couldn't make it up! There are techy alternatives, however, and they're suitable for fitness levels from Mo Farah to Mo from EastEnders.

If you're at the more margarine-munching end of the fitness scale, Jawbone's 'Duels' might fit the bill.  You and a pal will both need a Jawbone  (the UP2 is £50, jawbone.com).  Then, through the wellness bangle's accompanying app, you can challenge them to a step duel. You get real- time updates on who's ahead in the 'walk-off'. Have you cycled up Ben Nevis today? Tough titty – Duels  only count steps, and as your foe walked from his sofa to his chip fryer several times while you were cycling, you're now behind.

Want something more advanced? The MyZone MZ-3 (£130, myzone.org) is a heart-rate monitor with built-in storage, so you needn't always pair it with your phone, unlike most such devices – just sync later. But the really clever bit is its free app, which rewards effort via Myzone Effort Points,  or MEPs. Which is also Members of  the European Parliament, confusingly.

Said MEPs are awarded based on how much effort you're putting in,  so if you're unfit but pushing yourself, perhaps by lifting two eclairs at once to really test those biceps, you'll  score more than a top athlete who's knocking off a 5k at a leisurely pace. That's an extreme example, clearly.

This playing-field levelling is genius, and lets you take on pals of just about any fitness level. Though you challenge GaGu at your peril, my friends. He's  a big lad, but he's not out of shape.

I don't like-a Lycra. Is there bike clothing I can wear that doesn't make me look a dick?

Guru is no MAMIL, and shuns 'technical' cyclewear. Yes, it's probably good for keeping the elements out, but do you REALLY want to resemble a colour-blind transvestite fetishist when you're commuting to Hounslow?

An obvious alternative is to just wear, you know, clothes. Like a normal person. However, if you like to exert yourself a bit, you ideally want some stretch to the fabric. And, of course,  a dinner jacket isn't super-visible during these dark winter nights.

His absolute favourite in this area right now is the the Raver Wave from Dashing Tweeds. This is a proper, three-piece tweed suit, but made using 'Lumatwill' cloth – a mix of Merino wool and 3M reflective yarns that looks normal in daylight but lights up like a Christmas tree when hit by headlights. Though, at £2,080 for the jacket, £1,040 for the trews and £940 for the waistcoat, this option is perhaps not for the more casual cyclist, and you'll need a helmet shaped like a bowler hat.

For a look that's less aristocratic and more hipster-sharp, try pairing  the Fox Wilson Preston jeans (£89) with Giro Republic's LX Road Shoes (£150). Fashioned from brown leather, the shoes are an unusually stylish mix of sports-casual and classic; and though they're two-bolt SPD pedal compatible, they can be walked in.  The jeans are your classic skinny kecks, but with flouro detailing on the inside of the right leg (just roll up and go!) and a loop for your U-lock. They're made of Schoeller 3XDRY denim, so are water-repelling, stretchy and, crucially, odour-resistant, so you won't stink.

For something a bit more mod,  try Fred Perry's Bradley Wiggins shirt (£75), which has stretchy bits and ventilation eyelets (plus a great big Perry logo, of course), or an ace-face-friendly Ted Baker Zipthru jersey (£95) from its Raising The Handlebars range.

Tough one. Guru is going to hedge his bets here and say, “Hey, it's up to you guys! Don't be sending me tweets calling me a 'Crapple bummer' or a 'Fandroid'!” No, really, please don't.

To put it in simple terms, do you prefer to just point and shoot, because you've got more important things to think about, artisanal flat whites to order and beards to grow?  In that case, the Apple iPhone is the best for getting good-to-great snaps with nearly zero effort.

The best overall cameras, however, are probably in Sony's Xperia line of phones, with the Z5 Premium offering a 4K screen to view them back on. Saying that, the Z5's cam has a lot  of manual controls, and you do need to use them to get the best out of it.  So don't come crying to GaGu if your initial photographic results look a little 'experimental'. Practise, guy!

The Samsung Galaxy S6 offers a decent halfway point between the two. Ease of use + lots of options = good camification, while the S7 camera is even better. But the choice… is yours. Well of course it is.

GaGu has never understood why women insist on the loo seat being left down. Surely, that's asking for wet legs every time? No man can be expected to drain the lizard through a gap that small.

Nonetheless, painful experiences  in house shares in his youth mean that Guru understands your predicament. Some men seem to wear watering-can attachments on their John Thomases when it's time to hose the porcelain.

The good news: tech help is at hand. Or at knob. The Illumibowl Toilet  Night Light ($20/£13, illumibowl.com) flares into life when it, ahem, “detects motion”, helping your fella to more accurately target his wrinkled old chap. It's “splashproof” and “easy to clean”, too. Isn't science marvellous

GaGu, I keep breaking my watch. What's the answer?

There is a solution, Colin, and you may not be surprised to hear that it's  a Casio G-Shock. There's  a small army of these ultra-rugged timepieces, but the roughest of the rough – the Panzer division – are the Mudmaster GWG-1000 sub-range.

Wrought from stainless steel and resin, these wearables are much like GaGu himself: chunky, handsome and with all of their holes carefully sealed so that mud can't get in. They pack  a thermometer, a barometer and an altimeter, and sync their time regularly with an atomic clock via radio.  Price: from about £500 (gshock.com).

How can I ski like a tech  bad boy?

To be honest, Gadget Guru is usually more of an après-ski man, who likes nothing better than to settle into a hot tub while swigging egg-nog and impersonating Demis Roussos.

However, he's lately been hitting the slopes big-time, wearing Rossignol's PIQ sensor (€149/£100, piq.com).  This little fella slips into your boot  and tracks things like edge-to-edge speed, G-force, carving angle/air time, rotation and more. Then, when you're back at the lodge, downing a flaming sambuca and tucking into fondue,  you can peruse your performance  and challenge friends to beat your air time, turning excellence and, er, other skiing-related stuff. As noted, GaGu is more of an aprés guy.

The key thing here is your PIQ score. Rather like the Jawbone and MyZone on the previous page, this lets you prove exactly who is the King of the Black Run, using a number. Pow! Pow!

Got an Apple Watch and wanna make that bad boy 'way pimp'? Head to ullushop.com for some seriously nice strappage. Prices start at $99 (£67) for leather (plain or dyed) and go up to $399 (£270) for alligator – and they also do stingray and ostrich.  It's like dinner round at Guru's house!

Gibson used to be known for making guitars – and for all Guru knows, it still is. But hot on the heels of its excellent Trainer running headphones come the Philips SHB8850NC cans (left, £90).  Yes, Philips audio is now a subdivision of Gibson. These headphones serve up both Bluetooth connectivity and active noise cancelling, which makes them something of a steal, especially if you're looking for both of those things.

GaGu's favourite launch this month was the MyZone MZ-3 (£130, see opposite page), at one of those modern gyms where they play loud music. His low-rent, so-called 'gadget expert' rivals were made to do push-ups and run on treadmills while a gym Nazi yelled instructions at them, to a pounding trance soundtrack. Guru made his excuses, picked up a free MyZone and went for  a coffee. That's how it's done.

Guru is a big fan of vinyl – both records with music on that dads like, and the plastic in general. His favourite turntable for the former is the VPI Nomad (above, £999).  It's ready to go with minimal fuss, thanks to both  a built-in phono pre-amp AND a built-in headphone amp. But Guru's favourite design feature is that its “platter rotates on an oil-bath bearing and is fitted  to the shaft with a #2 Jacobs Taper”. Woof! Guru has attached it to a petrol-powered generator on a trolley, plugged in a pair of Flare Audio Reference R1 cans (£750), and is now dragging it around North London as the ultimate retro-ironic 'portable stereo'.

He's said it before and will say it again: GaGu  is mad for robot vacuum cleaners. He loves them. Carnally. And his current pick is Neato's Botvac Connected (£550). Not only does this boast exemplary cleverness and strong filth-sucking,  it can also be set to work remotely via your phone.  Is that useful? No, not really. Is it cool? Hell, yeah!

Liked this? Check out The biggest tech sleeper hits of the past decade