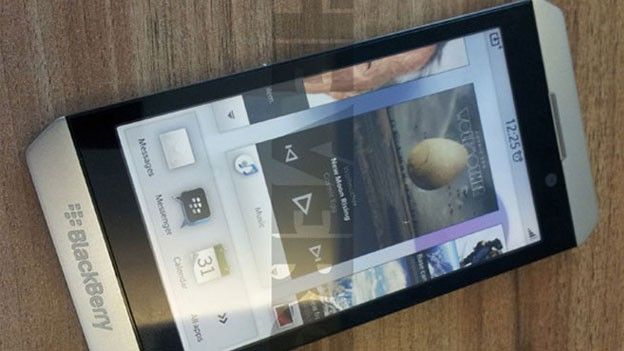 Research in Motion's much rumoured next-generation BlackBerry handset and the reported first in an upcoming breed of BBX OS devices has leaked online with BlackBerry London pictures making an early appearance.

Based on the QNX software used to craft the BlackBerry PlayBook platform, the upcoming BBX operating system is to become a regular feature on future handsets with the newly outed BlackBerry London expected to become the first of the new breed.

Doing away with the brands much-loved and now synonymous full QWERTY keyboard the BlackBerry London is said to boast a 3.7-inch touchscreen display book ended by metal endplates and line up slimmer than the minimalist Apple iPhone 4S.

With a 1.5GHz dual-core processor, 1GB of RAM and 16GB of internal storage the London looks set to be a step away from the current range of Black Berry devices and a move into the high-end smartphone sector. A 2-megapixel forward-facing camera is also set to appear alongside an unknown snapper on the rear.

Should RIM really do away with the BlackBerry's QWERTY keyboard, a key selling point and much loved feature of the range? Let us know what you think via the comments box below.