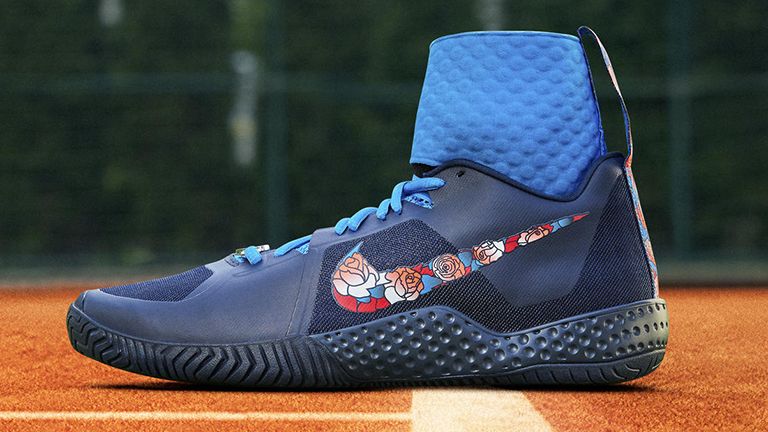 You might have invested in a terrific tennis racket but spare a thought for your feet. Sprinting to the net for a sly volley and sliding to return a long shot can take its toll on your toes. So we’ve rounded up some top trainers designed for tennis that may make you as light on your feet as Federer.

Read on for our pick of the top tennis shoes to buy today.

If they're good enough for Roger Federer....

If Nike’s Zoom Vapor 9.5 Flyknit tennis shoes are good enough for Roger Federer, they’re good enough for you. The shoes are built directly off the 17-time Grand Slam champion’s desires — to bring the comfort and breathability he valued in running shoes to tennis. In fact, Federer has worn versions of the shoe since its debut in 2012, so you know they’re good.

Available in classic white as well as some funky colour combinations, the trainer has a strong, dense knit, which helps deliver the support necessary for tennis’ lateral movements. A tighter Flyknit weave in the midfoot provides support, while open construction in the toe delivers added breathability.

There’s also a Nike Zoom Air unit in the heel to deliver low profile cushioning and a ‘TPU frame’ around the midfoot for extra stability, not to mention a herringbone traction pattern designed to shore up grip on hard-court surfaces. Now there’s no excuse not to win.

The best trainers for clay junkies

If you want to be the equal to Rafael Nadal on clay, a new pair of trainers might help (as well as a great deal of talent). Adidas’ Ubersonic Clay 2.0 shoes are available for men and women in a wide variety of colours. And they are designed for quickness and stability on clay. The low-cut shoes have a seamless knit upper that wraps around the foot with a secure, natural-feeling fit, which is important when sliding around a clay court. So-called Adituff technology around the toe reduces abrasion, while Adiprene technology provides cushioning for a comfortable match. And the shoes also have 3D Torsion for midfoot support and webbing the midfoot for extra stability too.

One of the most colourful tennis trainers out there, Wilson’s lightweight Kaos Composite shoe promises power and endurance. Packed with technology, the trainers, which are available for men and women, include stamped polyurethane in the front of the sole for stability, while the grandly named ‘Pro Torque Chassis LT’ technology prevents the foot from twisting, hopefully preventing injury from impulsive and sometimes inadvisable moves. The sole is treated to provide extra traction, while the insole is lightweight while providing lots of cushioning. There’s even an inner sleeve and tongue made from elasticated mesh that wraps around the foot for extra comfort and stability, giving players no excuse for not chasing every last point.

When it comes to serving, you want to sock it to your opponents, but it turns out a sock-like shoe may be exactly what you need on your feet. Nike’s Airzoom Ultrafly trainers boast a ‘sock-lite’ fit to give athletes improved ankle support and mobility on court. The lightweight shoes, which weigh in at just 10oz, help players move quicker, make shots sooner and win points faster, according to the company, which may make up for their unusual appearance.

The shoe features strong Flywire cables that lock down the midfoot, while the breathable Flyknit yarn ankle cuff delivers a secure fit without adding extra weight. There’s a Zoom Air unit in the heel and two in the forefoot for bouncy cushioning and an asymmetrical lacing system for extra support. Like with most Nike trainers, they come in an array of colours for those who like to look good on court and there’s a special version for clay too.

Sure, there’s no swoosh logo, fancy laces or cuffs, or even a funky colour scheme, but for amateur players on a budget, Slazenger’s tennis shoes are a good call. Available for men and women, the Lifestyle Shoes are all white or have a discrete navy trim making them a court classic. The smooth moulded soles have grooves for traction, as you’d expect, while a soft inner foot bed offers comfort for long, hard-fought matches, or those that go on for ever thanks to countless arguments over whether the ball was in or out.

Wilson’s Amplifeel tennis shoe looks a little like it’s escaped from Back to the Future, but its unorthodox shape has been created for a good reason. The sock-like shape and Amplifeel support technology is intended to let players feel more sensations, giving them greater foot control, according to the company. The shoe also includes Endofit Comfort + for superior support and Pro Torque Chassis for ‘explosive acceleration’ when there’s a killer volley or smash to be had. Last but not least, the trainers have a Duralast Outsole to provide maximum traction and grip, which can be a godsend on clay courts, not to mention badly maintained park courts with painful pieces of gravel underfoot.

Favoured by Benoit Paire of France, the Babolat Propulse Fury shoe looks aggressive and is built for 'explosive' players who like to reach every ball. To make life a little less exhausting, they have exceptional support thanks to a higher upper support around the ankle and external shell to reinforce the heel, as well as an inner sock for midfoot support and a secure fit. The trainers also borrow from the auto industry, with shoe designers working with Michelin tyres to come up with the perfect rubber formulation for the soles that offer the right amount of grip as well as good durability.

A classic design gets partnered with serious support

For a more classic look on court, Adidas’ Barricade comes in clean white and is crafted for all-court coverage on any surface. This means that if you receive a last minute call to replace And Murray at Wimbledon, it should be fine. The trainers’ main USP is ‘Bounce’ cushioning for comfort, as well as a breathable mesh upper and protection against drag that that occurs during serves, volleys and extreme lateral movements thanks to an ‘Adituff’ toe. And just like the more outlandish-looking Ubersonic Clay shoe, the Barricade also makes use of Adidas’ ‘Torsion’ tech to provide extra stability.

A second skin for your feet

Originally designed as a concept for the one and only Serena Williams, mere mortals can now get their hands on NikeCourt Flares, although the special edition rose editions may be for collectors only. The quirky-looking shoe was developed with Serena when she had problems with a rolling ankle. Nike’s team came up with a stable shoe that wasn’t too built-up and acts like a second skin. It features an unusual-looking Ariaprene ankle cuff, which Nike says helps deliver awareness of the body's movement in space and therefore a feeling of stability and confidence. It also connects to an internal bootie to promote natural foot motion as well as extra comfort. And for those who want to look cool on court, the trainers come in a mind-boggling number of colour combinations including a cool marbled effect.