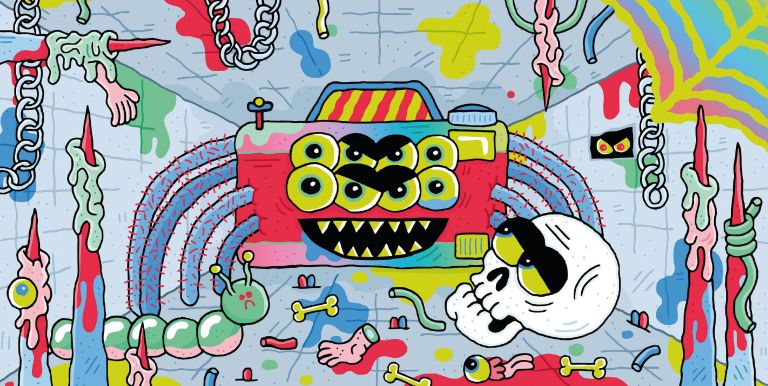 Gadget Guru specialises in answering your tech-related questions. This month he answers:

How can I become a better photographer?

I want to transfer from iPhone to Android

How do I get the best espresso?

Do I need a weather station?

When will I be able to get an electric car?

How can I become a better photographer?

Guru’s key technique for skill improvement involves sneaking into the family’s heavily guarded money vault, dodging the laser net and spike traps, skimming off a few coins that won’t be noticed, then subtly throwing money at the skill that needs to be improved. His camera bag, overflowing with lenses, bodies, filters and the rest, is perhaps the most glaring example of this needless excess.

It won’t surprise you to learn that Ol’ GaGu wasted most of that money. Convincing one’s self that poor quality results are the fault of the expensive, exquisitely engineered equipment and not the slightly drunk operator is the curse of the open-wallet gadgeteer. A small photographic toolkit will carry you a long way, and realistically you only need three items to get started as an amateur: a good body, some versatile optics and a method of keeping that gear steady.

You apparently want to get better, so Guru will presume you’re not at the entry level and look a little further up the price scale than the £499 Nikon D3300 and £779 Canon EOS 800D, both tremendous beginner DSLRs. And we’ll avoid mirrorless cameras; practice with a viewfinder is all but essential. Invest, then, in proper DSLR kit priced in such a way as to stab you directly in the wallet. GaGu wouldn’t like to push you either side of the great divide – it’s really up to you whether you select the Canon EOS 7D Mark II (£1149), the Nikon D7200 (£920), or one of Sony’s tremendous snappers like the Alpha a77 Mark II (£949).

Don’t skimp on the tripod; Vanguard’s tried-and-tested Alta Pro 263AB 100 (£165) is hugely versatile, and slightly less bonkers than spending £819 on the Gitzo GK1555T- 82TQD Traveler. Your lenses are going to depend on the body you choose, so GaGu will refrain from specific recommendations, but make sure you have at least a 18-55mm lens (often supplied as a kit lens), a decent-budget 55-200mm telephoto and a fast lens – something along the lines of a f/1.8 50mm ‘normal’ or ‘portrait’ optic.

When GaGu’s actions are eventually discovered, he has a few potential options; escape to one of his Cayman Islands holdings; retreat to the bunker beneath Guru Towers; annihilation of all of his enemies; gruesome John Travolta face swap. It’ll all be fine. Unless you mean in the digital sense, which you probably do. Forget Guru said anything.

Guru’s primary archives, and OS-mandated mirrors of his hard drives, are stored on a lockable 2TB Buffalo MiniStation Extreme NFC drive (£140), ExFAT formatted so that any old computer can access it. Nightly, these get transferred to Guru’s NAS, a £485 Synology DS416 with four bays fully loaded with 32TB storage, much of which is dedicated to media files and such. Now and then a second drive is filled with backups, and left disconnected from any devices in case a covert government organisation plants another bit of snooping software on one of GaGu’s machines.

Making the most of the Cloud is important, too. GaGu’s phone, for example, uploads his snaps both to Google Photos and to his Plex server, giving him two copies should his handset get crushed under an irate farmer’s tractor again. Critical files from local computers – future writings, world domination plans, meticulously researched dirt on T3 editors – are entrusted to Backblaze’s Cloud backup service, which stores ‘unlimited’ data for $50 (around £39) per year.

If you’re only keeping a limited number of files, you may even be fine with the free tiers of OneDrive, Google Drive or Dropbox, which hook into a folder and mirror your files online and, if you install on multiple computers, between your machines.

You could go even madder than GaGu’s already-overkill plan, but three copies in three distinct places should be enough to keep any file safe. Even if you keep one copy away from your main PC, you’re far more covered than someone who doesn’t back up at all.

I want to transfer from iPhone to Android. Will I lose everything?

You will not, unless your personal transfer plan involves immolating your iPhone in a ritual sacrifice before setting up your Android device. Certain things might not be easy, certainly they won’t be as simple as they would be if you were switching between handsets of the same flavour, but you should be able to get everything off using usual downloading procedures. Be warned, though: you may have to use iTunes to get your hands on things like photos, an extreme punishment if ever there was one.

The most difficult bit will be transferring contacts, but even this is straightforward if you know what you’re doing; upload them to your iCloud account, download them from there as a vCard, then upload them to Google Contacts. They’ll automatically sync with your phone as soon as you sign in with your Google account.

How do I get the best espresso?

Pre-brewed pods receive less of GaGu’s trademark disdain than you might expect – they’re quick and easy, not messy, and delicious enough. But banging out one of Clooney’s finest autobrews offers none of the satisfaction of the small cup you’ll get out of a Gaggia Naviglio (£439), an affordable bean-to-cup device from a company that’s been producing espresso makers for nearly 80 years.

Miele’s sexy coffee rectangle, the £850 CM 6110, deserves a little recognition for its great interface and hidden bean grinder, and there’s a wealth of more expensive chromed kit that you can stick in your kitchen in order to play Starbucks at home. But that Naviglio? It’s really good. Don’t pay more until you’ve tried it.

Do I need a weather station?

No. But you also don’t need that Xbox. You don’t need that fancy watch, those LED-infused peripherals, that… whatever that is. There are very few things you ever need. So, the question is, can you afford one? Will knowing the comings and goings of the weather push your happiness needle further up than the £600 you’d spend on an Oregon Scientific WMR300 would push it down? If so, get that thing in your garden right now. If not, you can always go for Netatmo’s cheaper and very smart Weather Station for £130, which monitors conditions inside and out, and reports to a phone app.

When will I be able to get an electric car?

Guru’s designs on a shiny new Tesla are well known, not least because he’s too lazy to drive himself anywhere, but the infrastructure isn’t perfect yet, as T3 found in its big 1,700-mile trip last issue – though admittedly, it was only really a problem in the Scottish highlands. That said, Tesla’s charging system is better than the other options, which is a factor if you’re looking at a cheaper option. The landscape will be ready soon, or it had better be, given that people the world over are pushing hard for a ban on new fossil-fuelled cars. Give it a decade and we’ll have the infrastructure, battery technology and variety of choice that’ll make all-electric cars a no-brainer.