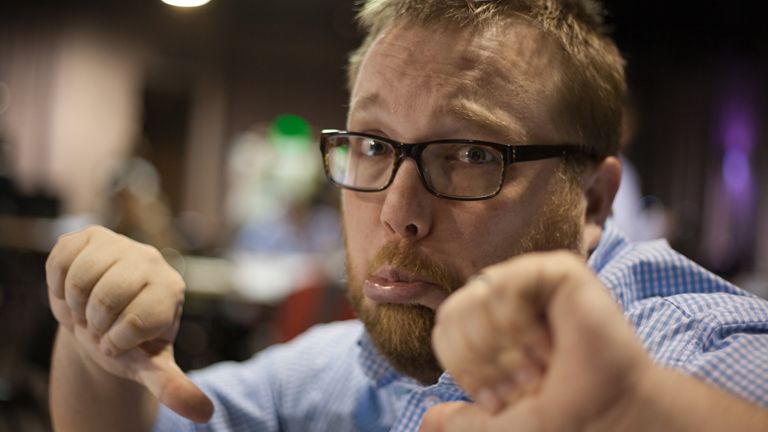 We know that there are problems in the world like war, poverty and climate change. These are big problems that demand expensive and complex solutions - and are essentially a massive headache to merely think about. But there are some problems that are much more manageable - and problems to which there are solutions readily available. It is these problems, so-called First World Problems, that we're talking about here. Sure - it isn't the end of the world that you can't see your iPad in the sun… but it isn't half annoying. So here's our pick of the gadgets to have in your back pocket, for when First World disaster strikes.

It's dark out, your eyelids are sagging, you've climbed under the covers and… breath out! The day is done and you can relax at long last! But… goddamnit! The thermostat is still cranked up, virtually guaranteeing an uncomfortable night's sleep unless you sort it.

If mustering the energy is too much for you, then be sure to pick up a smart thermostat. Something like a Tado, which connects up to an app and will let you set schedules and crucially, adjust the temperature from your bed. And not only will you never have to get back out of bed to adjust the thermostat ever again, but you'll never wake up to a cold house too. Brilliant.

Relaxing in the sun sounds like a good idea until… disaster! The weather is too lovely. How are you supposed to see your iPad now? I mean, you could engage with the world around you or, god forbid, buy an actual printed book like cavemen used to use… or you could pick up a Tech Armor Anti-Glare protector, which gives your screen a “matte finish”, which is much easier to see in direct sunlight.

“My Wi-Fi won't reach to the toilet”

Make your time spent sat on the throne more productive by extending your Wi-Fi to the bathroom. If you pick up something like the BT 11ac Dual-Band Wi-Fi Extender 1200 (which works with all broadband providers), it uses the magic of powerline networking to create a new wireless hotspot at a second point in your house, thus giving your connection greater consistency. The BT Extender supports both 2.4ghz and 5ghz wireless connections and can deliver speeds of up to 300Mbps and 900Mbps respectively. And there's even an ethernet socket in the bottom so you can extend any wired-only devices further afield too.

JETech's Power Bank will give you several recharges without having to charge up the charger, and will only set you back a tenner. You've no excuse not too.

Alternatively, if you're going out in the wilderness and want to make sure you'll always be able to use GPS to find your way back to civilisation, Kudo makes the Kudosol solar charging case for iPad.

Have you ever uncorked a bottle of wine only to wish it was as joyful an experience as buying proprietary printer ink? Then good news, as Kuvée has solved a problem few have realised they have by inventing a Wi-Fi-powered wine bottle, which takes top-up cartridges just like a printer.

For just around £125, you get a bottle with a touchscreen. When you load in a wine cartridge, it'll tell you about the wine, and give you details on where it is from. There's also a built in shopping interface to buy more wine straight from the wine bottle.

We don't know however we lived without it.

Looking for some peace and quiet? Can't find the remote? Or just want to ruin someone's day in your local branch of Currys? The TV B-Gone is a small infrared device that you can carry on your keychain. Simply tap the big button and it will cycle through hundreds of known IR frequencies for many different makes of TV, and will fire an “off” command at each. Before you know it, that video wall is now just an expensive black monolith.

“I have expensive bluetooth headphones, but now I can't plug them into non-bluetooth devices to listen to stuff”

Those bluetooth headphones seemed like a great idea at the time - hey, no more wires! But now it means that you can't use them to listen to audio from your PS4 controller or the TV that's built into the treadmill at the gym. Poor you.

Luckily then, there's a relatively affordable solution. The ESYNiC A2DP adapter plugs into a standard 3.5mm jack and will transmit the audio it receives over bluetooth - so that you can connect with your fancy headphones. And it only costs £12.99. Brilliant!

“I'm watching a show live on TV rather than my DVR, so there's advert breaks”

All of those millions of hours of free TV content, and what do they want in return? Those TV bastards want us to watch a handful of adverts every so often so they can pay for entertaining us. Outrageous!

To get around this, you can pick up a small device called the TV Ad Blocker, which when it detects an ad-break, will use IR to automatically switch over your TV to a preferred channel (such as a radio station), or an external device such as a DVD player.

The way it works is by using your wifi to connect back to TV Ad Blocker's base, where the makers apparently monitor 100 channels simultaneously for ads - and will send out signals during the breaks. It fully supports Freeview and Freeview HD, as well as a handful of other UK services, for just £99.99 up front, and then £49.99 per year after that.

“I've moved to a new house but the internet won't be installed for two weeks!”

Undoubtedly the worst part of modern life, it is for some reason possible for your electricity and water supplies to remain working when you move house… but what about your supply of memes and viral videos? There's nothing more frustrating than hearing someone in a distant call centre telling you that you'll be without connectivity for a fortnight. How are you supposed to live?!

A decent temporary solution might be to tether your phone - but if you're conscious about your mobile data, or want to connect up a laptop or a tablet without draining power from your phone, a mobile hotspot like the EE Osprey 2 might be a good solution. Fifty quid at Currys will get you the portable device, which generates its own hotspot, and 6GB of pre-loaded 4G data, which is valid for up to 60 days. So it should hopefully tide you over while the internet is out.

“I live in a stable, Western country, with a job that affords me some disposable income. I am materially comfortable, but I still feel a nagging anxiety about my wealth and social status in comparison to others”

Our final #firstworldproblem is perhaps the toughest yet, but thankfully there is also a technological solution. A Stanley 151621 Fibreglass Curved Claw Hammer, which is just £8.89 on Amazon, can make all of your problems go away. Simply place your phone or any other devices that can access Facebook, Instagram or Twitter on a solid surface and use the hammer's manual mode to apply force to your devices.

After a few applications, you'll find that your anxieties have turned into a growing sense of inner calm. And even if it doesn't fix your anxiety, a smashed phone is sure to attract attention when you post about it on your timeline - which might finally give you the validation that you crave.