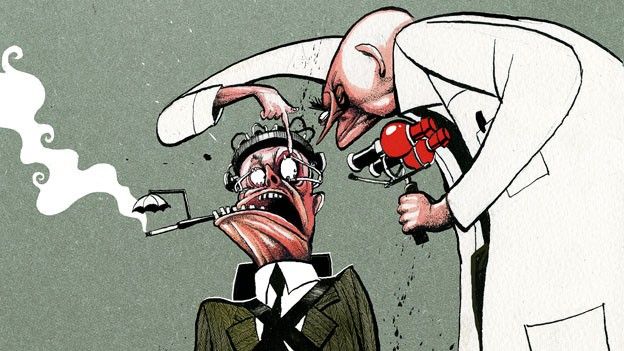 From electro massage machines to vacuum hair cutting devices, we take a look back at the potted history of the most ill-advised and bordeline lethal tech ever conceived. Enjoy the ride...

The most powerful gadgets in the world when used well can be a force for good. But in the hands of dreamers, innovators and idiots behind these devices of yore, it proved a tad unnerving. It's time to take a look back at the most lethal tech ever conceived by man.

The first incarnation of today's must-have kitchen appliance was the brainchild of New Yorker Joel Houghton. He attempted to revolutionise kitchen hygiene by building a wooden box with a hand-turned wheel that splashed water enthusiastically on to a jumbled pile of crockery. This had much the same effect as trying to remove last night's Bolognese stains by leaving your dinner service out in some light rain.

Patented in 1910, the Reynolds was the faithful friend of many an ardent correspondent. Fatigued from composing a lengthy missive, the scribe could give his fingers a well-deserved rest by passing his envelope through its intricate mechanism of rollers, which dampened and then sealed it in a matter of seconds. The fact that most people possess a tongue meant it failed to catch on, sadly.

Looking like something from the London Dungeon (pictured), this elaborate marriage of bellows and binoculars required the wearer to pump puffs of cool air through a chamber directly on to their own eyeballs – mmm, soothing. Remember that scene in A Clockwork Orange when Alex has his eyes held open during the experimental aversion therapy? That was less frightening.

Interest in dangerous therapeutic massage continued well into the next decade with this contraption, which resembled a sort of chubby pastry crimper. Produced and sold by Thompson and Capper Ltd of Liverpool in the 30s, this was the ideal tool to unwind, and worked by holding one Bakelite handle attached to a ridged metal roller, which was then moved over the skin generating tiny sparks of electricity. The result: electric shocks in both hands, red raw, corrugated flesh and, apparently, “better circulation”.

These illuminating eye-glasses had two battery-powered bulbs fixed atop the rims of the frame. These no doubt came in handy for those meandering, late-night walks home from the local speakeasy, as long as it didn't rain, potentially causing the wearer to suffer electrocution of the eyes, thereby necessitating a lengthy session with the aforementioned Eye Massager. Happy days.

Most normal people would say that caging a baby is cruel. Inventor and mother Emma Read, however, concluded that it wasn't cruel enough. Patented in 1922 as a device for mothers in London's Chelsea Baby Club to give their children more fresh air and keep them out of mum's hair, this tot-kennel was fitted to your window frame and designed to dangle madly over the streets below. It was perfect for those mums who couldn't afford the luxury of either a garden or basic common sense.

Built for the more cowardly and less conscientious combatant, this modified M3 sub-machine gun allowed the user to literally shoot round corners, spraying bullets indiscriminately from behind the safety of a handily placed brick wall or innocent passer-by. Russian commandos now use a more developed version of this design, fitted with video technology so they can actually see what they're shooting at.

The year is 1954. It's all but compulsory to smoke at all times, in all weathers. In a bid to help this health-sapping effort, Robert L Stern realised the world needed a device that suspended a cocktail-sized umbrella over the end of your cigarette to make smoking in the rain a doddle. While it didn't keep your fag all that dry, it probably did help you cut down, once you caught a glimpse of yourself in a shop window.

Want to enjoy the restorative health benefits of being very hot, but don't fancy getting naked in front of a load of large, perspiring retirees at the local leisure centre sauna? This was essentially a large hot bag into which you would seal yourself until either refreshed or dead. As a result, users gained a rare and exciting insight into what it's like to be boil-in-the-bag Uncle Ben's.

Necessity is the mother of invention. Just ask the frequently robbed John H T Rinfret, who after tiring of being mugged, decided to examine personal security from a brave new angle. He neglected old-fashioned locks and developed a case that, in the event of a robbery, could spill its entire contents on to the floor at the mere yank of a chain. “Want to steal all my stuff do ya, punk? Well let's see what you think about this! Ha ha! Hey… stop picking up all my stuff!”

South African Jan Louw created a hairstyle that quite literally sucked when devising his patented barnet tamer. Louw's vac attachment contained whirring blades and adjustable spacers. All you had to do was choose your preferred cut depth, power up your vacuum and run it over your head, sucking your hair into the path of the blades and giving a uniform cut. Lookin' good! This may sound like a terrible idea, but such devices are made to this very day, so someone obviously likes them…