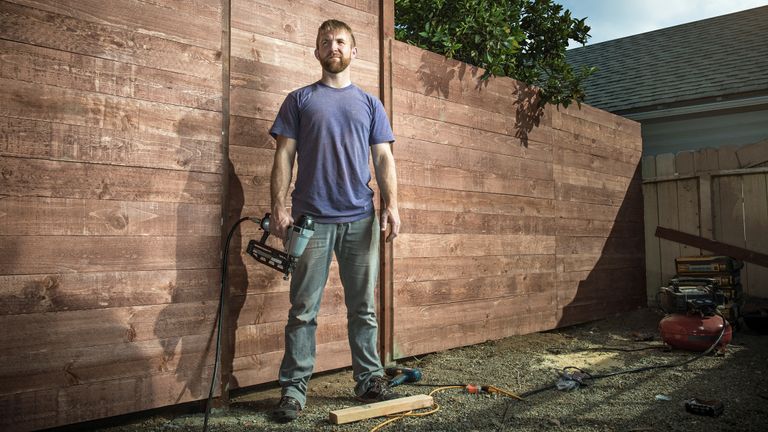 Britain may have now moved on from the long nightmare of compulsive house renovation sparked by Changing Rooms and its ilk, but DIY is still a necessary part of life for many people.

However, statistics show that millennials barely know which end of a hammer is which, meaning the noble arts of putting up shelves, fixing things, nailing things to other things and painting stuff may die out within a generation.

Perhaps by then, all our homes will be so smart they'll be able to change colour on command, and IKEA shelving units will simply put themselves together using advanced AI, or robots will do it all, or something.

In the meantime, here are some DIY accoutrements that help make household renovation and decoration tasks feel like fun, rather than an arduous duty that leaves you filled with rage and anxiety…

The paint roller that refills itself

-Quite heavy-Cleaning is still a nightmare

Look how happy that woman is. Have you ever seen anyone looking that cheery in the midst of repainting walls? That's because she's not having to keep endlessly recharging her roller, because the Wagner Power Roll refills itself from a tank in the handle. The head also turns on its own, reducing your effort when it comes to applying that paint to the walls, too.

You can get enough in the tank for 'up to 70 square feet' of wall rejuvenation, and the handle extends up to about 2.5m.

Despite claims to be 'lightweight', once filled with paint this is actually quite hefty. It also takes some getting used to, struggles in fiddly areas (well, what doesn't?) and just like a normal roller, it's a nightmare to clean. For the price, we'd have few qualms about chucking it out after doing multiple rooms in one go, and then not thinking about repainting again for a good decade or so.

We wouldn't use this to do just one bedroom, but for doing large stretches of wall at speed, the Wagner can be an absolute god-send. You'll have most of the wall space of your entire new house done in a day. Then, you could spend the next six months doing the edging and fiddly bits with a brush, at a snail's pace, or you could try Wagner's self-explanatory Smart Edge Roller.

It runs on four AA batteries (provided) which need replacing after every 40 litres of paint.

-A hammer is a trifle cheaper
Check Amazon

One sure-fire way to make DIY fun – and most other things, come to that – is to invest in some totally over-specced hardware, so you can be sure that your tool is working for you rather than against you. Another way is to pretend you are a space soldier, executing bits of hardwood with extreme prejudice, rather than Steve from Croydon putting in a skirting board. Enter the Nail Gun.

Hailed by T3's resident man with the tool belt, Leon Poultney, as 'the best high-end nail gun you can buy', this is the weapon you should procure if you really really want things well and truly nailed to other things.

This baby will shank a line of 6.3cm nails into solid oak in seconds, thanks to a near-zero ramp-up time. The 5.0ah battery pack that powers it is far more convenient than old-school gas cartridges, too.

If the price is too daunting, you could step down to the excellent, intimidatingly named Ryobi Airstrike. It's got a less military-grade spec than the Milwaukee but it's also significantly cheaper.

Sends your spirit level to the spirit world

+Super accurate levels and lines in seconds+Built like brick outhouse

Just as when 'having it large' at one of the UK's many splendid 'rave' venues, when it comes to erecting shelves, putting up stud walls and more, your best course of action is to 'reach for the lasers'!

This self-levelling (up to 4 degrees) trade favourite will paint green laser horizontal and vertical lines on your wall at the push of a button and is accurate to 0.3mm/m.

A handy magnetic bracket allows you to wall mount it, or you can bung it on a tripod, or sit it on a big pile of books, if you're not so pro.

It comes with DeWalt's usual sturdy and eye-catching carry case, while "Overmould protection maintains calibration under jobsite conditions," whatever that means.

What goes best with lasers? That's right: more lasers. As well as conjuring up the straightest lines available to humanity, lasers can also serve as ultra-accurate tape measures, hopefully ensuring that you never cut a length of wood too long or short ever again.

This eminently pocketable Bosch one is good for up to 20 metres, and a textbook exercise in one-button simplicity.

At last: a chainsaw that fits in your pocket!

+Useful for a wide range of craft and DIY tasks+It's a tiny chainsaw!

-Arguably more at home in the garden

Bosch may boringly opt to call this a Nano Blade Saw but as you can clearly see, what it actually is, is a mini chainsaw, shaped like a gun. Quite possibly some readers are at this point shaking their heads sadly and saying, "How juvenile", while other (arguably cooler) readers will be going, "Wow, a mini chainsaw shaped like a gun! Where can I buy one?”

• You can buy one here

Even better, the EasyCut 12 does actually have uses over and above being a really cool mini chainsaw that is shaped like a gun: those 4mm chain blades are not just for show, and are capable of a cutting depth of  65mm through wood, with a no-load stroke rate of 0-4100rpm

The other benefit of this design is that vibrations are incredibly low, while the nano blade is both durable and requires no maintenance of any kind. It really does go through (admittedly fairly small) slabs of wood like a hot knife through butter, while you shout "Ha haha! Take that, wood!" before finishing the timber off with your nail gun (see above).

For the clean-up afterwards

+Sucks up everything short of people

Cleaning up after a big DIY job can be more of a nightmare than the job itself, but not when you have one of these heavy-duty suckers. Quite possibly the ugliest thing you can buy in John Lewis outside of the curtains department, the WD4 is a bagged wet/dry vacuum cleaner that's like your classic Vax, on steroids.

As you can see from the images above, it will quite happily gobble up rubble, sludge, liquids, sawdust, smaller household pets... you name it. The thunderous 1000W motor makes short work of the clear-up and can even help unblock sinks, while the 20 litre capacity is gratifyingly large, considering its relatively compact dimensions (53 x 36.5 x 38.5 cm).

We would not, however, recommend using this on your best Persian rug.

…And for the post-job cuppa…

+The most high-tech way to make tea

Job done? Time for a brew. Job not done? Might as well stick the kettle on anyway. Not even started the job yet? A cuppa might help get you in the right mood to commence.

Those seeking a more precise and techy way to take tea will love Sage's The Tea Maker. It's also a kettle, and first heats the water to exactly the right preset temperature for various different types of tea. For instance, it's 80º for green tea, 90º for oolong, and 100º for actual tea, that normal people actually drink.

Your tea leaves sit in a little metal basket at the top, and once the water is up to the correct temperature, the basket glides down on a sort of vertical monorail. It then steeps for the correct period of time, before levitating back to its starting position. It's pure mechanical poetry in motion.

Clearly there are cheaper and simpler ways to make tea than this, but none are so elegant.