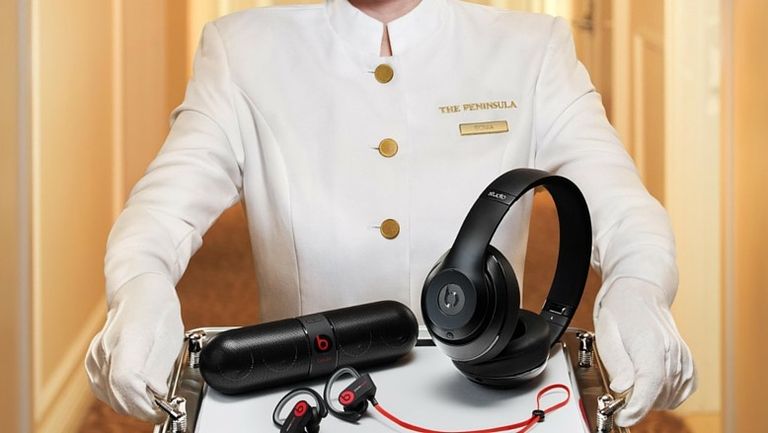 Five-star hotels used to be sold on the 'white glove experience', where everything was manicured, clean and perfect. Things have changed, and digital-savvy travellers are demanding more tech, more apps and more personalisation in rooms.

Forget white gloves – the future for the 'techotel' is black boxes, touchscreens and personalised tech.

Want a hi-tech hotel? Head to Japan, where it's not uncommon to find iPads and USB slots galore even in budget hotels.

There's been much discussion about the Henn-na Hotel near Nagasaki being the ultimate techotel, but the use of androids at the check-in desk is slightly misleading; this is an ultra-budget hotel that's trying to do away with staff costs. If you want a real hi-tech hotel, head for the Peninsula Tokyo, a 314-room, 24-floor hotel in the city's Maranouchi district close to the Sony Building.

The first shock is The Void, a 70-metre high glass fibre sculpture in that sees 24 winding LED cones, each of 1,313 crystal LED bulbs, spiralling downwards through the Peninsula Tokyo. It runs the full height of the hotel, it's viewable from each floor, and it's pure sci-fi.

If you can pull your eyes away from the view of Tokyo, the rooms at the Peninsula Tokyo all have a 42-inch Pioneer PDP-427HX plasma TV.

That dates these rooms slightly, Pioneer having stopped making TVs a few years ago, but since they're still among the best around it's a selling point for AV-heads. The TV remote also works as the master controller for a host of other tech in the room, including a DVD player underneath.

If you just want to look at the view, a roller comes down to cover the TV completely. Now that's what a custom installation should do.

As well as a DVD player underneath the TV, there's a panel containing myriad ins and outs, including SD cards from cameras. If that's handy for inspecting all the photos you just took around the city, so too are panels on each wall that control the lights.

Each has a mood setting for dimmed lighting, while there's a 3-in-1 printer, copier and fax machine hidden in the wall, too.

There's even a discrete 5.1 surround system, though all Peninsula hotel rooms are now being fitted with Yamaha YSP-4100 soundbars, which can play audio wirelessly from phones and tablets.

Darn those expensive long-distance phone call charges in hotel rooms. Not so at the Peninsula Tokyo, where a dedicated Skype handset is provided for making free calls.

However, it's also possible to link your phone with the fixed-line phone in the room via Bluetooth to automatically transfer incoming calls to any handset in the room (including in the toilet!).

If that's a nice touch of tech, so is the provision of internet radio. A panel embedded into the wall around the desk – which itself contains several LAN slots and plugs – gives you easy access to five international radio stations, including the BBC. It tunes-in in seconds, but there are actually 3,000 radio stations on offer.

“When you access internet radio you're actually accessing a database in Hong Kong so you can receive the right address, because they're always changing,” says Ingvar Herland, Group General Manager, Research & Technology at The Hongkong and Shanghai Hotels Limited, who own the Peninsular chain of five-star hotels.

Hang on … a hotel with a tech R&D department? Back in the company's home base of Hong Kong, a team of 20 electronic and software engineers in its Electronic Services Department (ESD) are working on the next generation of technology for guest rooms.

“There is a huge competitive advantage of spending money on technology,” says Herland. “For example, in Tokyo we have VOiP in our telephones so you get free calls worldwide … it's a Skype call.”

Herland reckons many guests choose the hotel because of that alone.

With such a great view outside, perhaps the best thing about the master remote is that it controls both the blackout blinds (always useful for watching movies during the day) and the curtains. There's no need to go outside to check the weather; an in-rom panel shows you the temperature in Celsius or Fahrenheit.

There's also no point venturing out to fetch a newspaper since the hotel provides temporary access to the PressReader app, complete with subscriptions to hundreds of international newspapers and magazines (including T3!).

Borrow some Beats In some Peninsula Hotels it's now possible to borrow a bunch of Beats by Dr. Dre gear, specifically Studio Wireless headphones, Powerbeats2 Wireless earphones and a Beats Pill speaker.

Others have a Samsung tablet with all apps pre-installed, multiple 3.5-inch and 4.7-inch touch-panels on the walls, a touch panel remote and an in-room phone – all of which are synchronised.

“If you change the language on one device, it changes on everything,” says Herland. “We had a special graphic designer to help us develop consistent, customised graphical user interface that have a luxury – it's not like the regular smartphone interfaces.”

Even the instructions on the coffee machine changes language.

Technology is changing fast, and the hospitality industry has big plans for the techotels of the future.

A lot of made of apps and keyless door entry using Apple Watch (which few own), but the three biggest changes will be smartphone integration, streaming movies and music, and the fitting in all hotels of Bluetooth beacons.

“With beacons, the tablet will understand that you've moved rooms, so will control the lighting as well as the entertainment system,” says Herland, joking: “you could use beacons to guide a drone to deliver the drink!”

He's also convinced that Netflix, YouTube and Spotify are next for in-room entertainment.

“Cloud content has taken the private home by storm and the next step will be the hospitality industry,” he says, pointing out that Netflix doesn't offer this because of licensing issues.

All of this comes with something the hotel industry is about to wrestle with; demand for WiFi.

“The bandwidth requirements of guests is increasingly tremendously,” says Herland. “There might have to be a future where we have to charge for very high speed WiFi, but for now we treat it as a utility like electricity and water.”

Either way, the smart home away from home is almost with us.