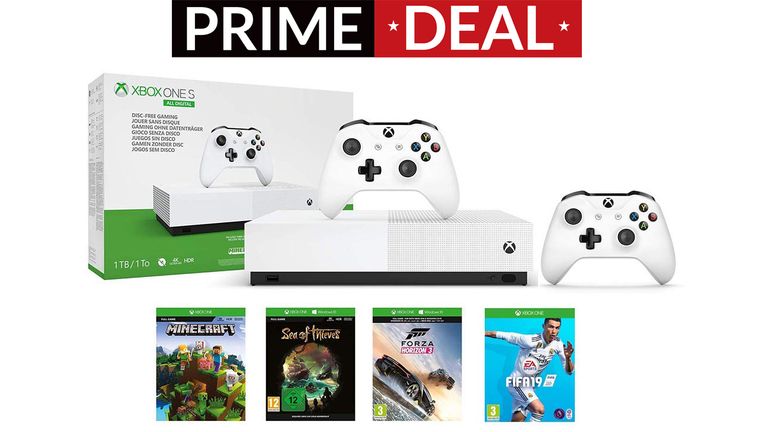 Gamers currently looking for top primary or secondary gaming system should absolutely check out this value-stuffed Amazon Prime Day Xbox One bundle deal, but in a hurry because as with all Prime Day deals, it ends at 11:59pm today, Tuesday April 16.

That's because the Xbox One S All Digital Edition Console is currently being offered up along with an extra controller, as well as copies of FIFA 19, Sea of Thieves, Forza Horizon 3, and Minecraft for only £169.99.

So that's a deal that delivers a sleek and stylish Xbox One console, along with the best football game in the world, an epic open world racing game, a brilliant virtual building sandbox, a swashbuckling pirate sim, an extra controller and free delivery. Check out the full details of this absolute bargain below:

Xbox One S All Digital Edition + 4 games + Extra controller | was | now £169.99 | £134.99 saving at Amazon
A truly value-stuffed gaming deal. This bundle delivers an Xbox One S 1TB All Digital Edition Console, an extra Xbox One controller, and four top games (Fifa 19, Forza Horizon 3, Sea of Thieves, and Minecraft) for a super-low £169.99. That's a gigantic £134.99 bundle saving and a hell of lot of gaming bang for your buck.View Deal

US Xbox One deals

Xbox One X | NBA 2K19 | $339.99 at Walmart
Over in the US Walmart has the 4K powerhouse Xbox One X gaming console available for only $339.99, which is an excellent price considering that is retails for close to $399.99 at many other retailers.View Deal

Xbox One S 1TB console with game + Extra Controller + HyperX CloudX Gaming Headset | now only $299 at Walmart | $65.33 saving
This is an awesome bundle deal from Walmart. You can take your pick from five different console with game systems, four different controller designs, and two different gaming headsets. The best value configurations get you the console, game, extra controller and gaming headset for only $299.View Deal

PlayStation VR | PS4 camera | Five Nights at Freddy's | Trover Saves the Universe | $299 at Walmart
Horror hit 5 Nights at Freddy's is one of two games included in this PlayStation VR bundle deal over at Walmart right now, which joins Trover Saves the Universe. You don't get the Move controllers like the deal above, but then again this one in $50 cheaper.View Deal

Deluxe 12-in-1 Arcade Machine with Riser | was | now $299.99 at Walmart
This is a cracking price cut on an arcade machine that delivers 12 classic games to play, including: Asteroids, Centipede, Major Havoc, Missile Command, Lunar Lander, Crystal Castles, Tempest, Millipede, Gravitar, Liberator, and Asteroids Deluxe. The machine usually retails for $399.99, however it is currently reduced by $100 down to a very welcome $299.99. It also comes with totally free shipping, too.View Deal

Pac-Man Arcade Machine with Riser | was $379.99 | now $349.99 at Walmart
One of, if not the, most iconic arcade games of all time, Pac-Man delivers hours of top fun and here, in this stunning Arcade1UP cabinet, is playable in its full glory. And it is playable right now at a discounted price point, with Walmart cutting $30 of its cost – bringing the price from $379.99 down to $349.99. As with all these cabinets, delivery is free.View Deal

Galaga Arcade Machine with Riser | was $379.99 | now $349.99 at Walmart
Galaga is one of the most famous - and commercially successful - vertical shooters from the arcade era, and it is available here (along with its predecessor Galaxian) for a low price of $349.99. That's a $30 price cut from its pre-deal price of $379.99. As with some of the other cabinets here, a riser is included so the system can sit on the ground. Delivery of the cabinet is free.View Deal

Golden Tee Arcade Machine with Riser | was | now $449.99 at Walmart
Among the most  popular arcade golf games of all time, Golden Tee allows you to compete in a variety of game play modes with up to 4 friends. And this cabinet, which includes Golden Tee Classic, Golden Tee 2000, Golden Tee 1999, and Golden Tee 1998 is now reduced at Walmart by $50, with its price now sitting at $449.99 rather than $499.99. This cabinet carries big wow factor, too, with a backlit marquee.View Deal

Space Invaders Counter Arcade Machine | was | now $179.99 at Walmart
The big one, the game that arguably made the video game industry what it is today, and the title that for many will bring back extreme childhood nostalgia, is now available to own in the home for just $179.99. That's because this stunning Space Invaders counter-top arcade machine has just had $20 carved off its cost at Walmart. The machine comes pre-assembled and features the game's original artwork, too. Enjoy the game like never before on an upgraded 8-inch color LCD screen.View Deal

ASUS ROG Strix Scar Edition | was $1,299 | now $989 at Amazon
An Intel Core i7-9750H and Nvidia GeForce GTX 1050 Ti grant the ASUS ROG Strix Scar Edition gaming laptop proper game-playing grunt, while 16GB of RAM, a 128GB SSD and 1TB HDD mean that the laptop can function well as a powerful work station, too. Amazon has slashed $310 (24%) off its price for Prime Day.View Deal

Lastly, we feel it is important to note that Currys, John Lewis, Walmart, Target and more are currently having their own rival Amazon Prime Day sales, so be sure to use our list of sales below to check out each retailers own gaming deals offering, as you might find an absolute steal.