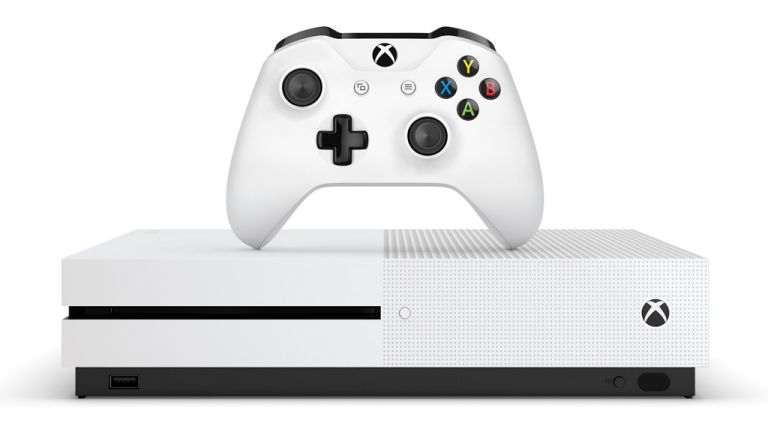 Welcome to T3's official Xbox One S review. Microsoft has taken all the things that makes the Xbox One great, and made it even better. The result is a smaller form factor that's quieter and powered by powerful new features such as HDR. We'll break down how Xbox One S plays the best Xbox One games, cover what you get in the box, share our official verdict on the system's new design, and critque its capabilities and features as a new console iteration.

If you're currently looking for a great Xbox One S deal, such as in the Cyber Monday 2019 deals spectacular, too, be sure to check out T3's best Xbox One S deals guide, which is updated every day with only the very cheapest prices on offer. With Amazon Prime Day 2019 on the horizon, this is the perfect time to give your Xbox One setup a refresh with the Xbox One S.

We've also reviewed Microsoft's 4K flagship console, so if you want to game in Ultra HD then be sure to scope out our Xbox One X review.

Xbox One S review: what's in the box?

As you would expect for a system that is whiter than Santa's beard, the Xbox One S comes in a slick, minamilist, white box. Open said box and you are presented with a series of smaller white boxes, as well as the system itself, which is covered in - yep, you guessed it - a white sleeve.

Our first reaction when removing the Xbox One S console from the box is, "well, that's much, much more desirable as an object." The smaller overall footprint, cleaner lines, and fresh and light colour scheme gives the system a modern aesthetic and, interestingly, much more of a presence when viewed in person compared to the original Xbox One. This is odd as you would expect the smaller system to be less monolithically notable than its bigger, brasher and blacker older brother, however - specifically when the console is clipped into its new stand and positioned in a vertical orientation - it stands out, and in a good way.

Another thing that stands out almost immediately is the new, dimpled patternation that covers large swathes of the console. The ugly, industrial, black grating of the original Xbox One is now gone, with the front, sides and half the top of the system now covered in indented dimples. This patternation is even carried onto the rear of the system in terms of its cooling, with a strip of air holes stretching across its rear.

And while we're hanging out back, let's talk ports and connections. These are the same as on the original Xbox One, however, they have also been streamlined and cleaned up in terms of placement, with each port now located on a single line situated south of the cooling holes. Along with the obligatory power port, the Xbox One S comes with a HDMI out and HDMI in, a brace of USB ports (with another on the front), an IR out, optical digital out and wired network port. There is however, as previously reported, no Kinect port, with a USB adapter needed to connect the accessory. Each of the Xbox One S' ports is well spaced out and easily accessed when plugging things in.

Microsoft has always been good at this part of the pre-gaming process and it is business as usual as soon as you press in the controller's Xbox button and watch as it - as well as the power light on the system - lights up and softly glows. A series of slick menus then clearly guide you through the setup process, with things like hooking the system up to your home network a seamless experience.

Of course, as soon as you've got the Xbox One S online during setup, it then immedietely updates. This is the long-anticipated Summer 2016 Xbox software update, which along with a series of platform-wide additions and improvements (such as Cortana integration and enhanced social and sharing options), also is necessary in switching on the Xbox One S' 4K Ultra HD Blu-ray playback and streaming capabilities.

Because that's really why you're buying this new system, right? Sure, the console comes with that bigger hard drive (we'll come back to this shortly), however when you go out and drop the necessary £349.99 Microsoft wants from you then its that 4K you're investing in isn't it? If you already own an original Xbox One this point is doubly marked as, if you do, then that sure is a lot of money to burn for just a smaller system with a more pleasing aesthetic and a slightly streamlined controller.

Well, the good news is that, once the Xbox One S is set up, loaded with the new update and the relevant apps downloaded, the 4K experience you get with the new console is superb. For a start, the system automatically detects if you are running a 4K TV and asks to upgrade the dash's displayed resolution accordingly. Once you've got your Xbox dash displaying at 3840x2160p, streaming or playing content at 4K is as simple as starting the relevant app - such as Netflix or Amazon Prime - or loading your 4K Ultra HD Blu-ray of choice (we watched some Stranger Things, Salt and Batman vs Superman Ultimate Edition).

And, that's it. We had no HDCP 2.2-style issues, we just plugged the Xbox One S in using the included high-speed HDMI cable, set up the system, and then played the 4K content we wanted.

Xbox One S review: any other notables?

Finally, let's talk about that much publicised 2TB hard drive, which is the model that you'll be plumping for if you buy now (models with lower HDD sizes are slated to come later). Well, the main take-away is that, unsurprisingly, you don't get to use all of that 2TB. Fresh out of setup you are left with 1.6TB of usable space to store games and media, with the system's OS and core files taking up the other 400GB.

Is this an issue? No, not at all - well, certainly not for 99.99 per cent of gamers. Even with that 400GB gobbled up, you'd have to seriously go to town in terms of installed content to get anywhere near that limit, with one hell of library installed. The average game, as released today and installed digitally, only takes up about 45-55GB of storage space, so by our quick calculations this new system would allow you to install about 30 AAA, space-intensive games before you hit any cap.

For the average user, here at T3 Towers we feel that 1.6TB is more than enough space and, crucially, it also feels future-proof.

After a week's usage of Microsoft's new system, overall we've got a favourable impression of the Xbox One S, despite not really being blown away by it.

Would we have liked a hardware and power bump in terms of gaming performance? Yes, yes we would, as this system still lags a little behind the PS4 in terms of raw graphical fidelity.

This marginal disparity however, right now at least, remains a minor point, as it has been over the past couple of years with the original Xbox One.

However, if Sony proceeds to quickly release its hardware update, not only introducing 4K playback but also a gaming-focused hardware spec bump, then that gap could become really noticable.

As to the all-important question of whether you should run out right now and buy an Xbox One S, well, that depends on your current setup and future usage scenarios. If you intend to build a 4K Ultra HD Blu-ray collection and are looking for a cheap player to kick things off, a player that also doubles up as a home console, then the Xbox One S is a top choice.

Even if you currently own an original Xbox One, we still think it is a good choice and worthy upgrade. If, however, you don't have a 4K TV and are in no rush to start streaming and playing content at this resolution, wanting instead just a high-powered gaming machine, then the Xbox One S isn't the system for you.

Evolution not revolution is a clichéd, well-worn saying, however in this circumstance it seems apt and fitting. While the Xbox One S' biggest changes are arguably all cosmetic, with little else of note changing under the hood, each change is for the better and, no matter how hard you try, it is impossible not to be impressed by the system's ability to act not just as a slick gaming console but also a simple-to-use, 4K Ultra HD Blu-ray player and streamer.