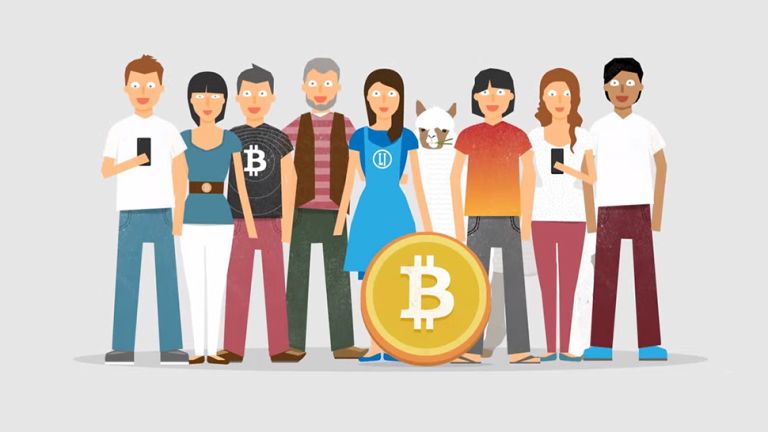 If you've spotted mentions of Bitcoin and other cryptocurrencies like Litecoin mentioned in tech news stories, and always wondered what they were, we're here to help - we'll explain how these virtual currencies work, and why they're making some people very rich.

It's a vast topic and we can't promise to make you an expert in all things Bitcoin in just a few minutes, but we can at least give you the basics, so you can hold up your end of the conversation the next time talk at the dinner table turns to the cryptocurrency revolution.

Images from weusecoins.com - check out their video guide to Bitcoin.

What is a cryptocurrency?

Cryptocurrencies work like the money you're used to, but instead of coins and notes in your pocket, these tokens of monetary value are stored as digital assets. Get yourself a few tokens, and you can exchange them for goods and services on the web, or convert them into regular currencies like US dollars or pound sterling.

One of the big differences with cryptocurrencies, besides them being completely digital, is that they're decentralised - that means the various systems monitor themselves, rather than having banks in charge. That has its advantages and its risks, as we'll see.

How exactly do systems monitor themselves? Well, the software code and all the transaction logs are published publicly so anyone can see and verify them. That doesn't mean that everyone can see that you just spent some Bitcoin on a new graphics card, but an anonymised record of that deal is available - that makes it very hard for hackers and fraudsters to carry out a cryptocurrency scam.

These public ledgers are called blockchains, and people who use their computing power to verify transactions and create new digital tokens (known as mining) get rewarded with a little bit of cryptocurrency cash for their troubles. The blockchains are securely encrypted, which is where the crypto meets the currency.

Add in all the usual benefits of the web, like instant transactions that cross the globe in seconds, and access from any device connected to the internet, and you can see why so many people are excited about the potential of cryptocurrency. Right now though, we're still at the "Wild West" stage, where only the most adventurous are getting involved.

Bitcoin was the first fully realised cryptocurrency and remains the most well known. If you come across an online store that accepts cryptocurrency payments, then it's highly likely that Bitcoin will be the one that's supported.

It emerged in the wake of the 2008 financial crash, with programmers and tech enthusiasts looking for a way to cut out the middlemen of Wall Street and other financial institutions, ditching fees and minimising the risk of financial scams along the way.

You can, if you want, get Bitcoins by mining them using your computer, but there are now so many huge operations dedicated to this task all across the world that you're going to be spending more money on electricity than you'll make back from Bitcoin.

A much easier way to get Bitcoin is to simply buy them from a currency exchange: you have a choice of exchanges for buying Bitcoin and a choice of wallets for storing them. We don't have the space here to go into too much depth in terms of getting started with Bitcoin but there are plenty of decent guides on the web that walk you through the various options.

One of the measures in place to try and keep the Bitcoin market stable is that the Bitcoin software algorithms set the maximum number of coins that can exist: in the region of 21 million. Exactly what happens then remains to be seen and will depend on various market pressures and other factors - it's just one of many unknowns surrounding Bitcoin.

What are the other cryptocurrencies?

Bitcoin isn't the only cryptocurrency in town and you'll find plenty of other options if you want to get involved in these digital currencies. All work along similar lines, and all are subject to the same volatility as Bitcoin is - a sizeable number of people are trying to make their fortunes through cryptocurrencies, which adds extra pressure to the market.

Ethereum is the hip new cryptocurrency on the scene, and here too there have been sharp rises in price recently. The Ethereum platform goes beyond currency with support for all kinds of decentralised applications built on blockchain technology - it's not as popular Bitcoin but it could potentially be even more influential in the future.

Litecoin is another cryptocurrency with a strong following, and it's probably the second most well-known one after Bitcoin. It's been around since 2011 and introduced some technical improvements over Bitcoin, including ways to reduce bottlenecks in processing times and some extra security measures. If you're looking for a stable cryptocurrency that's still accessible to first-timers, it's worth a look.

There are many others we could mention - Dash, Dogecoin, BlackCoin, Ripple and more - but you start to see diminishing returns in terms of how well supported these cryptocurrencies are and how easy it is to get started with them. If you're thinking of dipping your toe into the water, we'd recommend you stick with Bitcoin, Litecoin or Ethereum until you've learned the ropes.

What do I need to do to get rich?

Earlier we described cryptocurrencies and Bitcoin as the Wild West, and like the American frontier in the 19th century, there are potentially big gains to be made as well as a lot of potential pitfalls to look out for as well. You can make a bit of money from an investment in Bitcoin, but it's a risky market, with conversion rates constantly shifting.

At the time of writing, one Bitcoin will cost you around £3,200 or $4,100 after sharp rises this year - but that will almost certainly have changed by the time you read this.

No one's really sure just how valuable Bitcoin is, because no one's really done anything like this before - your Bitcoin wallet could climb and climb in value against other currencies, but it could drop sharply too. You really need to know your Bitcoin and understand the risk before dabbling in the market.

As we said above, mining for Bitcoin using a home computer setup - even a very powerful one - is no longer anywhere near profitable. If you're going to get rich from cryptocurrencies, it's going to be from investments, and it's not at all easy.

With such volatility around the cryptocurrency's price, major stores and institutions have been reluctant to support Bitcoin, but it's early days yet. If Bitcoin can fulfil its promise of being a way of freeing cash from banking institutions and providing extra security and stability at the same time, you're going to be hearing a lot more about it.