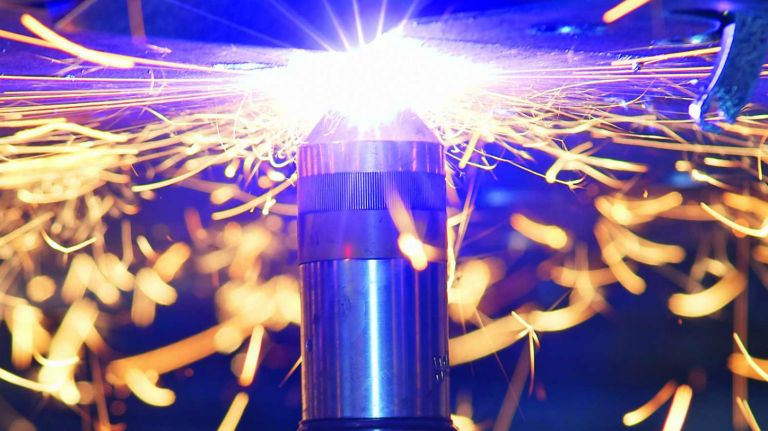 When it comes to sci-fi weapons, few come as iconic and awesome as the granddaddy of them all - the lightsaber. Wielded by Jedi, Sith and man children with an overabundance of funds, the 'light sword' is the kind of dream tech that manages to tick the sounding cool and looking cool boxes all at once.

Unfortunately, as cool as one of those replica versions that set you back £1,000 are (or the considerably less cool ones that are made of foam or *shudder* telescopic plastic), nothing can fill that hole in your heart that dreams of a real-life working lightsaber.

Thing is, we're actually a lot closer to that dream than you think. Sure, we haven't discovered a planet full of crystals or a Jedi holocron with a step-by-step guide (we're looking at you, NASA), but recent advancements in a variety of technological fields are bringing us one step closer to a proper snap-hissing saber…

Right off the bat, you'd assume the blade of a lightsaber would be one giant laser - one with enough power to cut through flesh like butter and melt steel just as easily. Thing is, a lightsaber is typically around 4-4.5 metres in length, but it's scientifically impossible to control the length of a laser so even if we did invent one powerful enough to generate such power, you'd end up swatting X-wings out of the sky every time you turned it on.

The alternative could be plasma. Plasma is normally created by stripping a gas's atoms of their electrons, a process called ionization. This process creates a glow, making it ideal for creating a bright, effervescent tube, but there's one little snag - plasma doesn't usually generate that much energy or heat (you'll find plasma in everyday items such as the fluorescent light tubes in your bathroom or kitchen).

Plasma is really electrically conductive, meaning it can withstand a lot of electrical power. This electrical power could generate a lot of heat in something like a plasma torch, with larger versions powerful enough to produce 24,982 degrees Celsius. That much power means one seriously huge battery, so you might have to have a giant pack on your back to power your saber while it's activated.

Plasma gas could also solve the problem or colour as well. The colour of your plasma can change depending on the type of gas you use in your setup - so to get the green of Luke's second lightsaber, you'd need to use chlorine. To nail the Vader/Kylo Ren red number? Better use some helium.

If plasma is a non starter, there's always the concept of using a mixture of flammable fuels to create a blade of flame. The issue with a plasma-based blade is where do you store all that gas and electricity in the hilt of a sword? The alternative is choosing a fuel that can be stored in small doses and still create the desired effect.

Back in 2015, YouTuber and all-round super inventor Allen Peng unveiled his take on the classic Jedi weapon. His version used a mixture of methanol/acetone for fuel, which was propelled into a 3D-printed tube by a propellant of methane. Allen then used a syringe valve to control of fuel into the enclosure, enabling him to switch off and ignite the blade on command.

Even using something as simple as boric acid helps change the colour of the blade from blue to green so you can ensure your weapon of choice is colour coded to your padawan skills. Oh, and he naturally added a speaker to emit sound effects from the films and a light that shone from the base of the hilt. Sure, it's not going to cut through much, but few things are going to look cooler than fuel igniting into flame.

Should you manage to create a blade made of pure energy, be it plasma or otherwise, there's a good chance that energy will be unstable - and unstable, deteriorating energy equals radiation. All that radiation would, in theory, burn your hands clean off (and probably the rest of you with it) so what's the solution to keep your body less than extra crispy?

One idea is to use a series of magnetic fields to dampen the high level of radiation, which would be built within the hilt of the lightsaber itself, projecting fields both through the handle and up the blade itself. Even something as simple as a layer or two of aluminium foil would help completely dampen infrared radiation, a natural byproduct of unstable energies like plasma.

Even commercial lightsabers you can buy online, such as the LaserSaber from Wicked Lasers, use a small magnetic ring built into the emitter at the very top of the hilt - although this one is used to help turn the 'lightsaber' on and off. Sadly these ones won't help you cut through the blaster rifles, but they will look really cool with the lights off.

Outside of plasma and flame based blades, there's also the possibility of using photonic energy. Invented by a team of scientists at the Harvard-MIT Center for Ultracold Atoms, the new form of matter could be the answer to making a real-life lightsaber. The big selling point of this 'photonic molecule' is the the fact it acts as it has mass, but retains the properties of light.

The discovery made some huge waves in the scientific community when it was announced back in 2013, mainly because said molecule was created by forcing two photos to interact with one another. Which, when you consider photons should normally pass straight through one another, is a pretty big deal. More importantly, if a beam of photonic matter could be fashioned, it would, theoretically, clash with another much like the sabers of the Star Wars universe.

There are plenty of issues to iron out - mainly shortening a beam of light to the correct length, and fashioning a handle that could withstand the insanely cold temperatures needed to make the photons interact (that's absolute zero, in case you were wondering). Still, at least it wouldn't leak radiation like a plasma blade!

Why not check out: The US Navy is planning to arm its ships with real-life prototype laser weapons