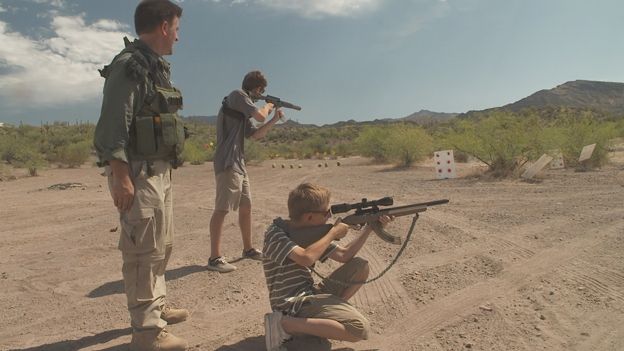 In a new, regular series, T3 interviews the stars about their lives, their tech and whatever it is they happen to be plugging and are hence available for interview.

T3 What are you plugging?
Tim Ralston: I am the spokesman for NatGeo's Doomsday Preppers series, and was featured because I invent and distribute survival gear worldwide. I invented the Crovel, which is a Crowbar + Shovel survival multi tool and the new NAX, which is a knife, axe, machete combo tool. After the series premiered, those have really taken off in popularity. I design gear based on needs that arise in the field, and work with members of special forces, fire, police, and civilian survival enthusiasts to refine the concepts before they go to market.

T3: How long will it be till the breakdown of society as we know it?
TR: Nobody knows that answer for sure. What we do know for certain is that disasters on all scales occur all over the world, whether they are manmade or natural, and that there are ways to be better prepared to handle them.

T3: Do you think this will be the result of natural or man-made factors, ie: technology?
TR: I think that modern society has become so interconnected with technology, that the two elements are inevitably related and effect one another in either scenario. For example, major storms occur that affect regions with the loss of electricity and other conventional utilities on a weekly basis around the globe. The factor of being without technology makes it more difficult to cope with the effects of experiencing natural disasters for sure. I don't know what combination of either element will contribute to a disaster scenario in the future, but I try to prepare for any situation that may arise in equal measure.

T3: Do you see a post-breakdown/apocalypse use for gadgets such as mobile phones, or will we need to revert entirely to non-electronic technology?
TR: It all depends on the variables of the scenario. In a hypothetical doomsday scenario where electricity has been neutralized, one may still find uses for electronic gadgets. Even if the uses become rudimentary, such as stripping the electronics down for components and so forth to use in the fabrication of other hand tools, a resourceful prepper will find a use for the materials. Again, it all depends on what the scenario details as being available and accessible in terms of electricity.

T3: Your website seems to suggest using the Crovel as a weapon. Would it be your choice of defensive weapon, or do you have another favourite?
TR: The Crovel is a very interesting multitool. It combines 13 survival tools in one and our customers are finding new ways to employ them daily. As for it being utilized as a close quarters combat weapon, the user may choose to use it in that way if the situation called for it. We have special forces, police, fire, and tactical trainers worldwide who find as many constructive field uses for the tool, as well as vetting it for both a defensive and offensive tool in combat situations as well. I like the saying "A man can build you a mansion with a hammer, and commit acts of violence equally with the same tool." I think the NAX would be my go-to defensive/offensive survival tool in the field because it was designed in part with help from Israeli Special Forces trainers to be as versatile a hand tool as it is an effective CQC (Close Quarters Combat) implement.

T3: Which post-apocalypse film is your favourite? Which do you see as the most realistic?
TR: Red Dawn. I can't tell you how many times I've watched that movie. Go Woverines! In terms of the film that depicted the most realistic portrayal of a catastrophic post-doomsday scenario, I would have to lean towards The Road. Very grim, very devastating portrayal of how desperate man can become when society has collapsed and it really is survival of the fittest.

T3: What would be your five-point, basic guide to surviving the apocalypse/the breakdown of society?
TR: Master the five elements of survival and practice honing your survival skills in the areas of medical, food, water, shelter, and personal protection.

T3: What was the first (electronic) gadget you ever bought?
TR: Walkie-Talkie 2 way radios! My friends and I used to play GI Joes in the backyard, and I just had to have walkie talkies as a kid.

T3: What's the coolest thing you've bought for your house lately?
TR: I recently added an underground survival shelter to my home. It's comfortable living for a family of 5 with all the amenities...including a 60 inch flatscreen.

T3: What is your favourite gadget ever?
TR: The Crovel, obviously! That's a tough one for a guy who's obsessed with survival gear because there's always cool new tech coming out. I can't say I have just one that is my favorite, but I am definitely partial to the gear I invent, because I create it based on the needs I encounter in the field.

T3: Which games console is best?
TR: I had to defer to my son on this one. Call of Duty on the PS3 is his obsession, so I'll say PS3.

T3: If you could make any gadget, the Crovel aside, what would it be?
TR: I would build a dual side-by-side motorcycle / ATV quad. In essence, it would be a troop carrier / transportation rig, consisting of 2 motorcycles that can be connected together form make one quad. Ultra-light weight. It would be meant for special-forces to parachute it down in 2 pieces, assemble it when necessary to haul larger quantities of gear/troops in a quad configuration, and easily disassemble when facing tough terrain or when troops need to break off in separate directions. One motor goes out, no problem, you have a backup. Basically, it gives you the best of both worlds.

T3: What tech thing would you “switch off” if you could?
TR: Cell phones.

T3: Okay, I hear you, but assuming they still exist, would iPhones or Android phones be of more benefit, post-apocalypse?
TR: Whatever works. Technology is great when the power is still on. Technology can save your life, just as easily as it can detract and distract from it. Not just survival gear, but technology in general. In an age when information is literally at most everyone's fingertips, there is no excuse not to take advantage of it to the fullest and to use it to enhance and educate your skill sets. And remember, despite what may be on the horizon, “Prepare for the worst, hope for the best.”