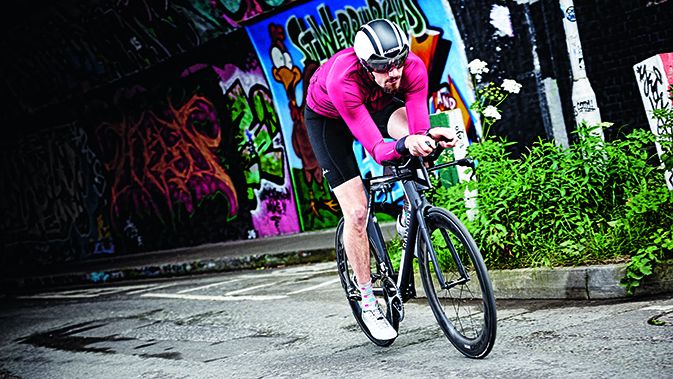 I think there's something really epic about straddling two wheels. The feeling I get - whether it's ripping up the streets on a motorbike, smashing over any terrain on a mountain bike, or trying to ace my fastest time on my road bicycle - is addictive. But it's the latter of those three that really gets me going, and it's all because of an app called Strava.

I used to think of myself as a pretty quick rider; fast on the straights with good power, and a handy climber, too, with great overall fitness. That was until I became acquainted with this app. In stats form, it kindly lets you know just how rubbish you are compared to the rest of the road-cycling population.

So when T3 approaches me – lover of all things bewheeled – with a challenge to see if the very best in cycling tech can make me a better, faster athlete without me having to up my fi tness game, I leap at the chance to see what thousands of pounds' worth of gear can do for me.

But just how much benefit do you get when you're spending £2,000, or £4,000, or even a mortgage-bothering £7.5k? The law of diminishing returns says that the more you spend, the less benefit you'll get, so I'm keen to find out what these racing machines give you for your moolah.

If you've ever met me before, you'll agree with me that, as a six-plus-footer riding a bigger-than-average bicycle, I'm about as aerodynamic as a brick wall with a parachute attached to the back. Aerodynamics play a pretty big part in cycling – just look at the Olympians riding around the aerodrome: aero bikes, helmet, skin suit and hunkered right down. They even shave their legs to get maximum air-slipperiness at full pelt. Lucky devils.

So the first bike I put to the test – namely, the Ribble Aero 883 – might just be the perfect weapon for besting my Strava times. It's got a light, aerodynamic frame, designed to help you cut through the air like a bullet out of a gun, with a cutout at the rear to tuck the wheel right in, cables hidden within its boxy carbon tubes. Even the seatpost is sculpted, and it's finished off with aero-tastic Pro-Lite XL50 deep-dish carbon rims.

Though the base model comes in at a decent price point, Ribble's custom bikebuilder lets you tailor the cycle to your exact needs. In this case – with swanky wheels and a full Ultegra Di2 electronically-powered groupset, with various carbon add-ons (lighter is faster, right?) – the price almost triples. But no matter what you spend, you get a sexy aero frame – that's what counts.

Having never ridden an aero bike, I'm dubious of the benefits – especially when I'm told that the bike alone only counts for about 20 per cent of the aero effect. The Aero 883 feels like an aggressive race machine; low at the front – but it's still comfortable. Though I'm used to quick bikes, this feels like a rocket, able to build up speed quickly and maintain it, without you expending too much effort.

I'm sure the aero thing is working, and, lo and behold, Strava tells me my average speed on the 18-mile route has jumpedfrom a commendable 18mph to just under 20mph, and I'm beating PBs all over the shop. I've no doubt the electronic shifting is helping, enabling me to bang the gears up and down at lightning speed. You just tap the paddle and an audible whine lets you know it's pushed the chain to the next cog along. It's very cool, and effortless too.

On the sprint, the Aero 883 doesn't feel that quick, probably because I'm using brute force to smash through the oncoming air. But once again, at the end of the 0.6-mile straight – when I'm gasping for air – Strava says I'm faster on the Ribble, with an impressive time of 1:37 and a top speed of 32.2mph. On the same day, my own race bike hits 1:49 and 30mph.

It's time to try out the Specialized Tarmac Expert Disc Race – and I feel like I need a glass of water just to say its name aloud. The important thing here is the 'Disc' bit, for it denotes that this bike comes with disc brakes: powerful, hydraulic ones the likes of which you'd normally find on an MTB with super stopping abilities.

The Spec (for short) doesn't have pimp-style electronic shifting, but the Ultegra groupset is still sweet-as: light and snappy. Similarly, the carbon-fibre frame, though lightweight and gorgeous, isn't out of this world, with no aero goodness – though its deep-dish Roval Rapide carbon wheels do give you a bit of extra slipperiness. Clearly, this is a bike built more for a variety of racing situations.

Straddling the Spec, I immediately notice the stretched-out riding position – good for easily tucking into an aero position on the drops. Despite this, it's easily the most comfortable bike here, the carbon tubes on the frame damping road vibrations nicely. And it's seriously fast, too. Lined up on the sprint stage once more, the bike explodes into life when I mash the pedals, and to my surprise I match the Ribble Aero 883 with a time of just 1:37 – though it feels like a tail wind may be in play. On the long run, the lack of aero is telling; the Spec can only muster an 18mph average – even with its mega brakes, which enable me to brake at the very last minute on the downhill sections. Though on a rainy day, I suspect the Spec's brakes would give me confidence to ride faster.

The Canyon Speedmax looks like the kind of bike Batman would ride in his spare time. It's purpose, purpose, purpose. Designed for triathlons and TT races, it gives you an even bigger aero benefit than the Ribble, with its comically dished wheels and TT bars that let you get down low and super slippery. And check out the front end – it even has an aero water bottle. Bonkers! As soon as I look at it, I'm wary of riding it. It looks like it wants to kill me – and, funnily enough, it nearly does exactly that. On the long stretch, I'm constantly swapping between TT drops and handlebars/brakes as conditions change. It's heart-pounding stuff, not helped by the bike's inherent nervousness if it even sniffs a pothole.

And it gets worse – at the start of the sprint stage, I fear for my life. I want to bottle it. But I line up, head off (almost falling off) and get immediately on the drops. Thankfully, the bike's race-spec Dura Ace electronic gear-shifting calms my nerves, as I can rapidly change up while on the bars using the built-in buttons, without taking my focus off the road ahead. But at least three times, a car pulls out of a side road; I quickly grab a load of brake before stopping, then head off to the nearest bush to unload my nerves. Not only do I have to contend with cars, I've got the constant buzzing (pun intended) of the Wasp helmet alerting me when my head moves out of the optimum aero position.

Annoyingly, there's no way of attaching the Quad Lock mount to track my efforts, as the bars won't allow it – but I have back-up in the shape of the Garmin Fenix 3 strapped to my wrist. Though I can't race segments in real time, I keep track of my performance with a flick of the wrist.

The Speedmax isn't what I'd call a nice bike to ride, but the proof is in the pudding: this thing is hella fast. A personal best of 1:34 on the sprint stage is remarkable, given the obvious hazards, while on the TT-esque long stage it nets an average speed in the early 20s – and on the straights, I could keep pace with cars in 30 zones. If I could stay on the drops, I'd be faster, no doubt. My nerves are shot and my muscles withered from lactic acid, but I – and the bikes – have lived to tell the tale.