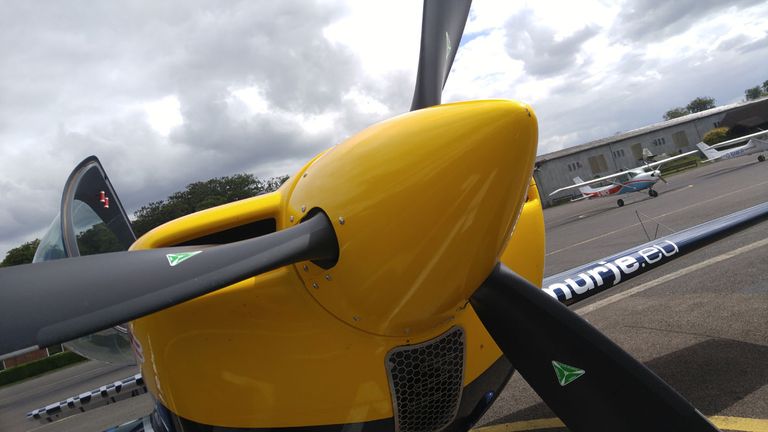 Budapest, Abu Dhabi, Las Vegas… and Ascot - the Red Bull Air Race is an international affair bringing together some of the world's greatest pilots, throwing them into the air and asking them to do some of the most dangerous stunts known to man. So I decided to jump in.

Throttling past at almost 200 miles per an hour, I watched the planes at the Red Bull Air Race wondering how awful that must feel in your stomach. Oh wait, a moment ago I'd just done exactly that…and it was a blast.

For some reason, Red Bull invited a tech journalist, with no real experience inside light aircraft, for a spin in up to 5G doing some incredible stunts across the backdrop of the Berkshire countryside.

Luckily the whole trip was planned quite late with only a few days left until take off meaning I had a lot less time to get riled up and worried about the trip.

As I arrived on an airfield in Berkshire, a few miles out from Ascot – the plane awaited.

My first thought was “is that big enough for two people? Am I going to be flying this thing on my own?” Upon closer inspection I was relived to find it did have two seats, as two people clambered in and took off on the flight before mine.

Now the fear hit. As I went to get ready and then headed out to jump in what felt like a toy airplane, the instructor taught me how to bale out in an emergency.

“Just flick these straps and jump out, then pull your shoot.” Wait…jump, out?! How? But before I could throw these words out of my mouth, it was time for a takeoff.

The plane we were using included a Hartzell 3-bladed 7690 propeller on the tip as well as a customised Lycoming Thunderbolt AEIO-540-EXP engine under the hood. Everything about these planes is customised to an inch of its life to create the fastest and most agile aircraft possible.

In this particular model the fuselage was a steel tube frame with a carbon composite tail structure and wing. Everything down to the cockpit canopy can be customised by the team themselves and often is.

In terms of safety, each pilot (and myself) are strapped in with a 7-point seatbelt and ratchet system with a quick release mechanism for when you need to get out quickly. Each pilot wears a helmet, flying gloves and a parachute whilst and if they're going overwater they'll be trained in underwater survival to ensure they can get out if they go down over water.

Back in the cockpit, we zoomed through the airfield and lined up ready for what actually proved to be quite a smooth takeoff. The view was incredible with sprawling fields as far as the eye could see.

It was beautiful enough that I kind of forgot what we were really in the sky to do. Until my pilot crackled into my ear. “How are we feeling? Shall we get started?”. Oh… yeah, OK then. Let's ruin this nice little flight with some stunts.

That's when we kicked off the real stunts and got stuck into the meat of the flight. We were flying pretty high and pretty fast when he threw the throttle up and we went into an Inside Loop.

It essentially throws the plane over and you end up right back in the position you started out in. We tried a few of them before heading straight into a couple of barrel rolls a moment later.

My absolute favourite stunt of the whole experience was the Bell Tailside – that name might not mean anything, but you'll know it if you see it – and as much as it was terrifying, it was an incredible adrenaline rush.

The pilot brought the plane up to a quarter of a loop meaning we were almost vertical. The aircraft then lost all momentum and I heard it slow down before coming to a complete stop and beginning to fall.

He swung the back rudder around at that exact moment meaning we went straight into a nosedive toward the earth. The view was incredible at that moment even though it was a field coming toward me at over a hundred miles an hour.

Then what felt like much too late, the pilot threw the plane into a quarter loop again meaning we were back flying toward the horizon.

During the flight we reached speeds of 240mph and hit over 5G in some of the stunts - it was more than your average rollercoaster.

And what felt like less than 60 seconds in the air was over – we'd been doing stunts for 10 minutes already and it was time to head back to the airfield and sadly back down to earth.

Our pilot then docked us ready to refuel and I took my shaky carcass out from the plane, onto the wing and down onto gods good, green earth.

I was immediately passed a bottle of water and it was gone down my throat… ready to come up again about 10 minutes later. It was the good kind of sick though, you know the stuff that feels like a job well done.

So if you ever get the opportunity to do anything like this, be sure not to swallow a whole bottle of water immediately after. It won't be staying down.

Liked this? How tech will transform your car of 2035