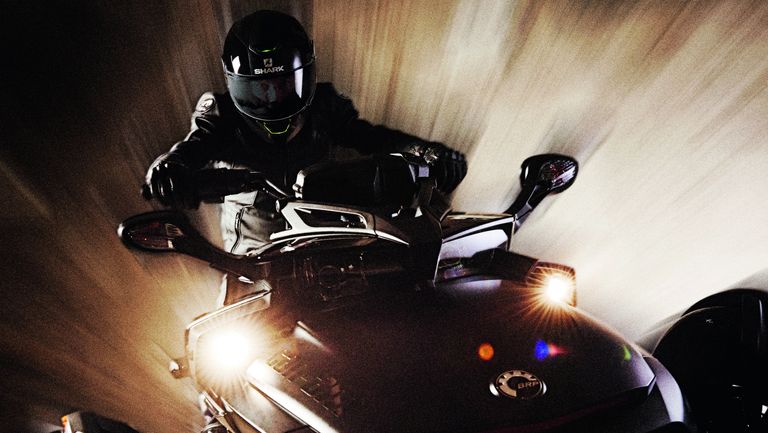 Didn't we all grow up wishing we could be superheroes? For me, it was mostly based on the shamefully simplistic idea that my superpowers would impress girls. Saving the planet was a distant secondary motivation. Oh, to be super-strong, superfast and super-muscular like the Hulk or Superman (however, it turns out that pants over your trousers = no girls). Or to merely be super-cool like Batman. Failing that, to be invisible like the lesser-known but equally enviable Invisible Kid and sneak into the girls' changing rooms after PE.

Well, now, with tech advancing ever more rapidly, frequently making the impossible possible, are we finally in an age when superpower fantasies can become a reality? I'm super-keen to find out. (For the record, I've grown out of the changing-rooms idea.)

So, T3 editor Rob Carney has agreed to arm me with a fantasy superbike that would turn Batman green with envy, the ability to see in the dark a la Spider-Man, special boots that have the potential to make me strong and fast like Superman, a fire shooter (no, really) like Pyro. And, to bring us bang up to date, a camera drone that'll autofollow me around, recording both the ne'er-do-welling of nefarious types and my feats of superheroism.

Right, enough talk! To the T3-mobile!

Marvel Comics supervillain and X-Men mutant nemesis Pyro can fire flames. Who wouldn't want that trick (literally) up their sleeve?

Primarily targeting magicians, the brilliantly imaginative folk at Ellusionist have created a device that shoots fireballs from your wrist. The Pyro Mini Fireshooter is much like wearing a wristwatch and can easily be concealed under a sleeve. After watching several safety videos – you know, so you don't set yourself on fire or anything – you load the chambers and… goodness gracious, great balls of fire! A few practice goes (the safety advice suggests 20 shots before you attach the device to your wrist) helps you understand what combinations of paper (more is more) and cotton (less is more) produce bigger or smaller ejaculations of flame.

The annoying git who's chatting up the lady you like asks for a light for his cigarette. “Sure, mate, here you go. Oops – sorry about your eyebrows!” (Don't actually do this.) The Pyro Fireshooter is seriously hot property. And then some.

Tech superpower #2: Get a robot sidekick!

Discounting R2-D2, there isn't a long history of superheroes (Jedi is a superpower) with robot sidekicks. But that was before the drone came along. And that particular robot just got even better.

The Hexo+ Self-Flying Camera drone automatically follows your every move, filming as it goes. It's programmable from your smartphone via an app, but take-off, flight trajectory, landing and constant framing are all taken care of, leaving you to do all your superheroing hands-free.

So in today's litigious age, when Mr Bad Guy of Baddie Castle, Naughty Road, Nefarious Town, suffers a black eye during that citizen's arrest you make on him, yet claims he was injured in an unprovoked attack, the Hexo+ can show the authorities how he definitely stuck the Vs up at you first, before mocking your totally cool tights-and-underpants combo.

Faster than a speeding bullet? It's not too far off – it can fly at up to 45mph.

And what's more, you don't need a brain the size of the Hulk's biceps to work it, as the app is really beginner-friendly.

One of the biggest problems facing your contemporary superhero is that most dastardly-deed-doers get down to their jiggery-pokery after it's gone dark, which makes detection tricky. Spider-Man is blessed with both 'spider sense' and passable night vision, but most of us mere mortals are likely to go bump-ouch in the night. Luckily, Seek's Thermal Compact camera can give today's techno-hero eyes like Spider-Man.

All you have to do is download an app, stick the small camera onto the end of your smartphone and – wham! – you can see in the dark. In thermal vision, warm things glow a shade of red, yellow or orange – or a colour scheme of your choosing if you want your targets to look like they do in Predator. During a superhero's downtime, it's great fun pointing it at colleagues to see how sweaty their armpits (or other areas) are. It's also really useful, and in fact primarily designed, for detecting energy loss in your home. But that's not as exciting.

Tech superpower #4: Be as fast as superman!

To chase, catch and bash-up pesky baddies like Superman (who, neatly, is faster than the speed of light) or the Flash (who's as quick as a… Oh, you guessed it), any self-respecting superhero needs to be fast and strong.

One great way to get fast is to run a lot, but it's time-consuming, tiring and can lead to injury because of the impact on your joints. Plyometrics – or jump-training – is seen as the best way to develop functional power, but there's even more stress on ankles, knees and hips. Then along bounced the Kangoo Jumps Rebound Shoes.

This eye-catching, super-springy footwear allows for all the vigorous activity a superhero-in-training needs, but with hugely reduced impact (up to 80 per cent is claimed). They also give the wearer a huge extra spring in their step, quite literally.

But aside from all of that, quite frankly, stick these on and you're gonna instantly freak your enemies out by looking all tall and weird.

Some comic-book aficionados dismiss Batman as a rich boy with gadgets. But that totally misses the point, as who wouldn't want to be that? None of The Caped Crusader's super-gadgets were as slick, sexy and super-desirable as the Batmobile, and while we wait in vain for it to become commercially produced, the Can-Am Spyder F3-T Limited Special Series is the perfect substitute.

If ever a machine was the epitome of a panther, it's this one. It's super-slick and stylish, majestically powerful and utterly compelling (our photoshoot kept getting interrupted by men unable to walk past without coming for a closer look).

The limited-edition threewheeler growls with a 1.3-litre in-line triple-cylinder engine, configured for maximum torque in every gear. A six-speed transmission balances comfort and fuel economy, thanks to a sophisticated hydraulic-clutch system, while the semi-automatic version uses thumb and finger paddle-shifting. Developed in partnership with BOSCH, the Vehicle Stability System integrates anti-lock brakes, traction control and stability control for confidence on the open road, when pursuing those nasty crooks.

It's super-comfortable, too, with premium wide shocks ensuring a plush ride even on bumpy backcountry roads, plus a whole load of pleasingly squeaky leather cushioning. I promise you, this thing friggin' purrs.

So there you have it. Techman has shown that today's top tech can make you more than human. As he withdraws from the crime-filled streets to T3 Towers' Tech-cave, here we round-up the great gadgets that allowed Techman to be so kick-ass: