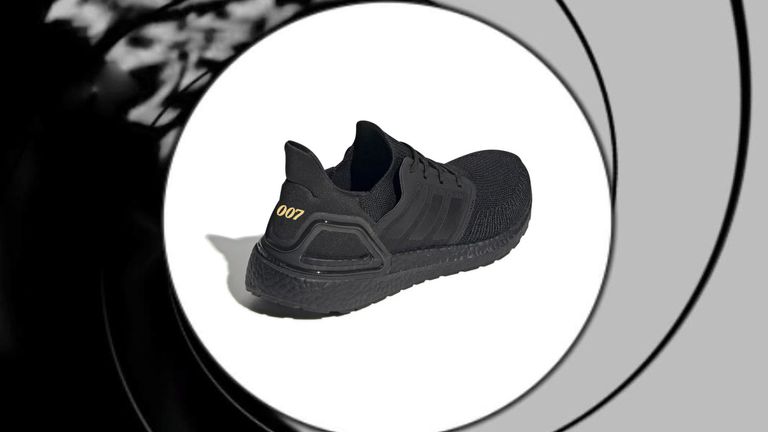 In just a few short months, No Time to Die will be released in cinemas, and with it will come the inevitable swathe of tie-in merchandise. The Bond franchise has boasted a plethora of branded clothing over the years; this Omega Seamaster watch, for instance, is a crowd-pleasing favourite in line with Bond's debonair image.

But adidas is the current three-stripe king of merch – just look at these adidas x Star Wars shoes for how deep they go. Now adidas has turned Bond's eye for high fashion into commemorative activewear, with the adidas Ultraboost 20 x James Bond 007.

The adidas Ultraboost 20 x James Bond 007 is a branded black-and-grey version of adidas' premium running shoe constructed partially from recycled plastic. With a Primeknit textile upper and a soft elastane heel, the shoe is designed to both look good and run well.

Pics of the as-yet-unreleased sneaker have appeared online from multiple sources: a promotional image from adidas is doing the rounds, while photos of the shoe in real life have materialised thanks to sneaker blogger solebyjc's Instagram account.

We don't yet have a release date for the shoe, but we imagine it'll be close to April in order to coincide with the film's release. Check out the leaked snaps below:

As you can see, the gold 007 branding is most prominent on the heel, while the black has been marked with a space-grey pattern reminiscent of the silver Aston Martin DB5, which Bond is set to drive in the film. There's no adidas branding on the tongue: instead, we have the gun-barrel graphic seen at the beginning of every Bond film so far.

The films themselves, especially the Daniel Craig era, are quite notorious for product placement. Although Bond prefers a well-polished pair of Oxfords to casual sneakers, even 00 agents have got to keep fit. Perhaps we'll see Bond sporting a pair of Ultraboosts during a training session in the film? Who knows.

In the meantime, you can watch the No Time To Die trailer below while we wait for more details on this limited-edition drop. Are you going to miss out once they hit shelves? No, Mr Bond, we expect you to buy...