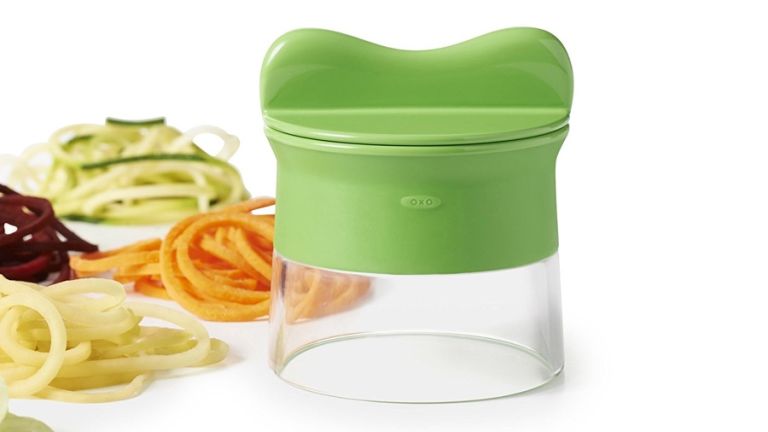 In the era of Instagram, it’s not enough for food to taste good. It has to look good and be good for you too - so what could be better than a rainbow of fruit or veg turned into spaghetti-thin noodles? Spiralizing veg can offer a healthier alternative to pasta, convince the kids to try something that’s actually good for them or just produce great visual effects when you’re entertaining.

There are four kinds of spiralizers: handheld, manual horizontal ones, manual vertical ones and powered ones.

The latter are effectively blenders rebuilt to produce slim strips of veg, and the manual ones are really peelers stuck in fancy plastic housings. The other kinds, manual horizontal and vertical ones, look like Heath Robinson devices with fixings and handles and little legs, but they do a better job than handhelds and aren’t noisy like electric ones.

As is so often the case, the right spiralizer depends on you. If you like to roll your sleeves up and get physical then a handheld will be great, but watch your fingers: some of the blades can be frighteningly sharp, which is great for firm fruit but not so great for fingers.

If you’re considering tabletop ones we’d recommend vertical ones for their superior results, and if you’re thinking electric make sure the one you choose is physically big enough to accommodate the things you plan to spiralize.

Our pick of the best spiralizers to buy today

+Really simple+Copes with most things &nbsp;

Hand-held spiralizers can suffer from a teeny weeny little problem: if you’re not careful you can end up spiralizing your own flesh. The Good Grips spiralizer solves that by having a plastic food holder that you can use instead of having your fingers anywhere near the blades.

Pull the top off and spike your food, hold onto the other section and then twist to turn the food into spirals. The top is only necessary for shorter cuts: if you have an entire cucumber to go you can skip the top and just use the bottom section of the device.

You don’t get a choice of noodle sizes, it’s slower than handle-driven devices and like other handhelds it’ll give you a serious workout if you try and use tougher veg such as carrots, but if you’re only spiralizing for yourself it’s a simple and effective tool. It’s dishwasher safe and easy to clean in the sink too.

Best for hard fruit and veg

The Spiralo is a vertical spiralizer, and it’s much less annoying and much more reliable than any horizontal model we’ve tried.

There are three attachments for three different kinds of cutting: 1mm spaghetti, 3mm spaghetti and spirals. It can handle vegetables of up to 17cm in diameter, so you can spiralize potatoes, peppers and large fruit such as apples, and unlike horizontal models it uses almost all of the fruit or veg.

If you fancy a tabletop spiralizer but don’t have much table, the Benriner’s Cook’s Help is ideal at just 10cm across and 13cm deep. It may be little but it’s powerful enough: the blades are as sharp as knives and you get four to choose from for slicing, coarse string, medium string and super fine shoestring. It’s designed for restaurant work and can cope with surprisingly large items - up to three inches across - although you’ll need to cut really big veg to size so they fit under the handle. It’s very easy to use and does a very good job, but it looks considerably more plasticky than it appears in the photos and swapping the blades around can be a pain.

-Feeder tube limits potential-Feels a bit lazy even if necessary

Not everybody wants to spiralize manually. Some people are in a hurry, and some of us have mobility issues that make repetitive tasks such as spiralizing very painful. Hurrah, then, for Morphy Richards and its super electric vegetable spaghetti maker. The two washable metal blades - one for spaghetti, one for ribbons - make swift work of anything you can fit in the feeder tube and there’s even a companion app. It doesn’t do anything - it’s just a recipe app - but still. Imagine living in a world where spiralizers have smartphone apps. The Express is fairly small but has a decent 0.5 litre capacity, and the 80W motor is powerful enough for carrots and other firm veg. As with most such devices, don’t pay the RRP: it’s widely available for less.

The only way this could be more middle class is if it dressed in Boden, drove an Audi and hung around the cafe in Waitrose - but that doesn’t mean it isn’t brilliant. It’s a Kilner jar with a spiralizer in the lid and a safety band so you finish with the same number of fingers you started with. Its 1L capacity means it can store loads of fruit or veg, and because it takes a standard Kilner lid it’s ideal for popping in the fridge. It’s dishwasher friendly, very easy to use and because the whole thing is self-contained it doesn’t create the cucumbery or carroty carnage that many other manual spiralizers do. It’s best suited to larger items - onions, large carrots, courgettes and so on - and you’ll need to be quite forceful with harder items such as apples.