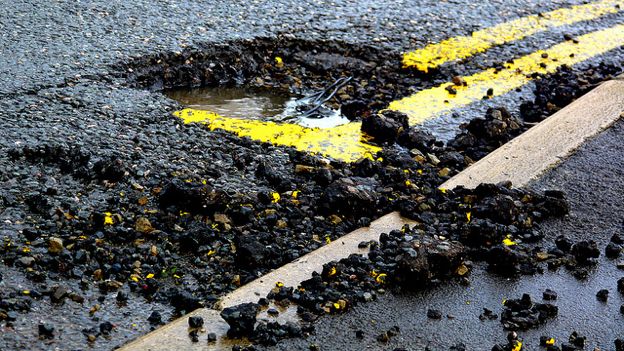 Potholes that spoil a day out in the car are being targeted by a new patent filed by Google in the US.

The solution contains two sensors that are used to automatically detect bumps in the road before generating a 'health report' that is broadcast into the cloud for further inspection.

Inside the solution is a GPS sensor and vertical accelerator. The latter records how bad the pothole is before the GPS sensor tags it with the vehicle location before uploading all of this information to the cloud.

Specialised software then goes through this to delete any duplicate reports or anomalies. Only then can the so-called health report for individual roads be created and it's so far unclear how this will be used to help repair the roads in question.

Google is by no means the first to the punch with this system. Street Bump, in Boston, uploads accelerometer and GPS smartphone data to a server and sends out alerts to drivers using roads that are affected. Unlike Google, that system is not completely automatic and trips need to be logged into it manually.

Potholes are a bigger problem than you might think. In 2014, a total of £144 million was spent in the UK alone on fixing pothole damage to roads and on top of that some £23 million was paid out in compensation to drivers with damaged cars. That's before you take into account the inconvenience of cars being out of action for a prolonged period of time.

Anything that makes the process easier will be welcomed by all sides, however, you'd like to imagine a world where the self-driving cars of the future actually fix the potholes themselves. It's not like they'e doing much else with their time, is it?